Flashed Bios and can only boot ubuntu 18.04 recovery mode

I wanted to install minikube, and that wanted virtual box, and that gave errors complaining about AMD-V (hardware virtualization) being unavailable, even after I found that in the bios and turned it on. Wisdom on the web said that the version of my Bios (F1) had a bug in AMD-V, and any version after F3 was also broken WRT virtualization, and didn't work well with 1950x processors (being more focused on the 29XX line). Soo.... I flashed to F3j

Now when I boot grub comes up just fine, and gives me the expected list of options (Ubuntu, Advanced Ubuntu options, mem check stuff, Windows 10) Windows works, and if I go into Ubuntu Advanced Options and select a recovery image it boots fine, however if I allow timeout or select the default Ubuntu option it boots, showing a purple screen and no progress (sometimes) or very fast scrolling text that stalls out one a message about clocksource: Switched to clocksource tsc. During this dead boot state neither the mouse or the keyboard (razer led lit models) light up and Ctrl-Alt-Del has no effect. The only recourse is to hold the power button for several seconds to force a reboot

My searching here and elswhere on the web suggests that this might be because EFI variables were being used and flashing removed them. These reports however all mention other motherboards, so I am not confident this is the problem. However in recovery mode I find that efibootmgr won't run complaining that EFI Variables are not supported on this system. So I've been trying to get that enabled... I loaded up the bios, and I've tried fiddling with the following options:

None of these has had any noticible effect.

I took a backup of the bios (using the quick boot tool in the bios) so restoring that might get me back to normal booting, but then I am still stuck on the Minikube install.

Update: after trying a BBS order with 960 Samsung first (the normal boot drive) I am now getting this when attempting a normal boot from grub: 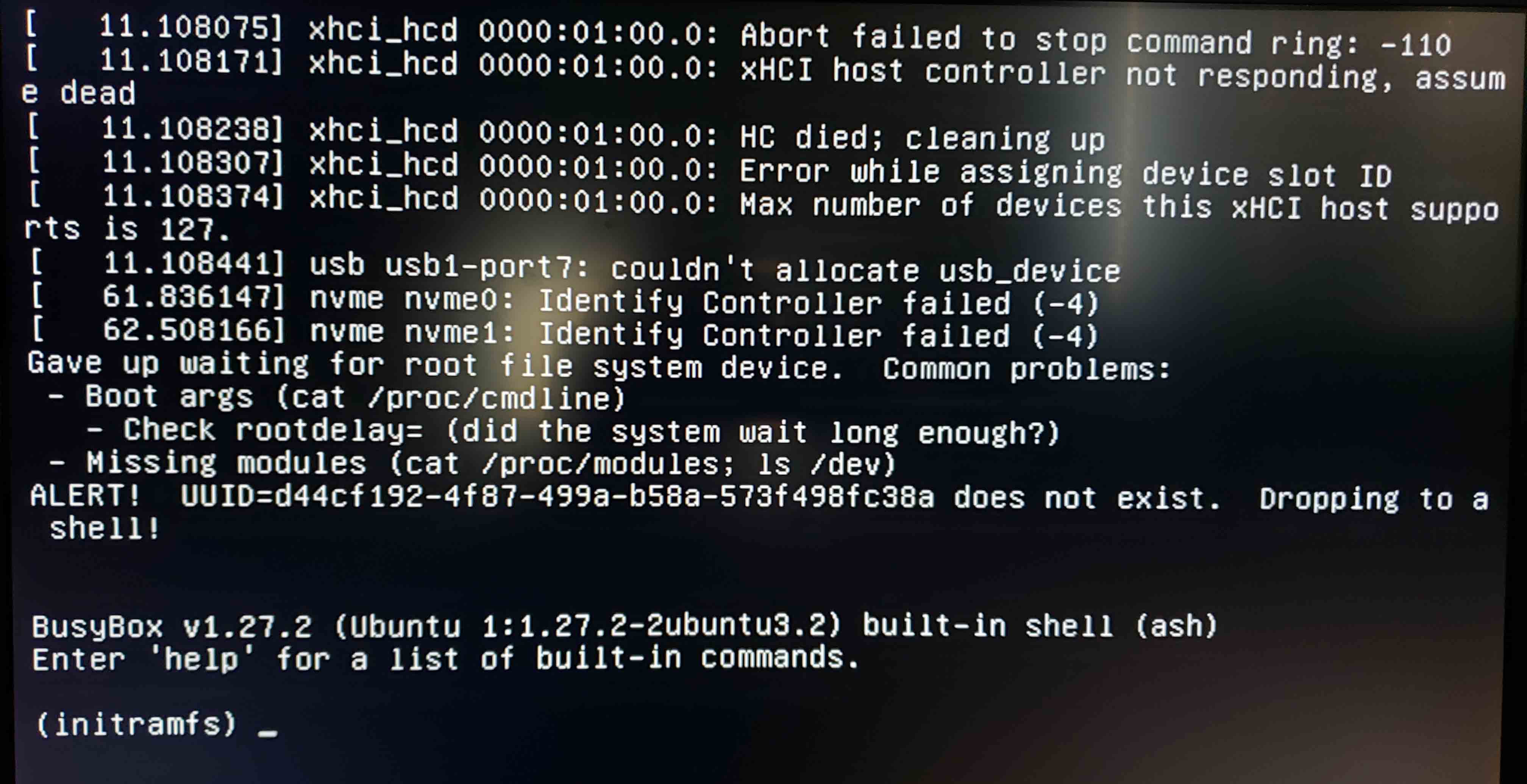 The windows boot and boot from recovery/resume continue to work

Also Note: the UEFI:Verbatim 5.0 boot option is the memory stick I used to load the loader (didn't realize that was the name attached to my memory stick, thought it was some built in thing)

I notice that the UUID seems to match what's in fstab.

Checkout golimar comment first and be sure the wanted UUID is present:

It seems to be a problem with your nvme setup. The last message before dying is "Identify Controller failed" and after that, it can't find the UUID which makes sense if your system can't read correctly from it.

To diagnose and fix try the following:

boot with an ubuntu usb thumbdrive, check with "blkid" what devices can be seen, some bios changes might have flipped the disk from AHCI to something weird that linux doesn't like, or the UUID might have changed. If you can't see the disk at all then check that it's set to AHCI. I've known some NVMe systems configured to use Intel's RST but from linux perspective the disk is unavailable.

Your can then overcome this hurdle either temporarily with grub or by mounting and modifying the original root filesystem. Grub option offered here:

When you identify the root drive make a note of it's path as a /dev/sdXX device, then pause grub during startup and change the UUID part of the command line to "root=/dev/sdXX" instead, then continue with the boot. If you get your system up and running once with this method you can then fix /etc/fstab and rerun the grub installation.

Not the answer you're looking for? Browse other questions tagged ubuntu uefi boot-loader bios or ask your own question.

1
Ubuntu 13.04 on Acer x64 PC, only boots after starting recovery
1
Fedora 25 installer wont detect SSD in UEFI. Keyboard/trackpad doesn't work in LEGACY
1
Efibootmgr does not add disk GUID in HD param
0
When installing Fedora 26 I somehow installed in Legacy mode(?) and now I can't boot into Windows
0
Can't boot the CentOS 7 that is installed on my USB on other computers
2
Dual boot Ubuntu with Windows 10 on UEFI mode
0
ubuntu 20.04 only boots from recovery mode