Adding the Cinnamon panel to the second monitor

I just setup twin display in Nvidia settings but can't see cinnamon's panel on the second monitor. How can I fix this?

In Cinnamon 2.6 and later you can have additional panels in any monitor without installing additional software. Just right-click the panel, click on Modify panel ... and then on Add panel. The top and bottom edges of all monitors should get highlighted and a new panel will be set up where you click. It works perfectly. Here is a github post from when it was merged.

Moreover, if you add a panel to a second monitor and add a Window list applet to it, it will only show you the windows in that monitor. It made me very happy!

In addition, if you want the windows to align towards the left instead of the right, you can drag and drop the Window list to the left side of the panel (red colored).

With MATE, you can create new panels and drag them to the second monitor (to enable drag, uncheck "Expand" in the properties, also uncheck "Autohide and "Show hide buttons"). Then, if you add a "Window List" on each display, it will manage each display's windows separately. This is very nice except that the Workspace Switcher still operates on both monitors at once -- hampering the ability to treat the two monitors as independent desktops. Although, it seems that you can workaround this by selectively applying "Always on Visible Workspace".

A setup that I have been using until recently is to enable the proprietary NVIDIA driver which allows you to select each display as a separate X screen -- each with its own panel and Workspace Switcher. There are some limitations of this approach, notably that you can't drag windows between displays, as I mentioned in this other post. This approach worked for me in GNOME2 -- I haven't tested it with the newer desktop environments.

This is now possible (UPDATE #2)

Cinnamon now has this functionnality. To save you the trouble of reading this long answer, you can directly go to nedim's

Unfortunately Cinnamon does not appear to have this functionality, (yet?). It only shows a panel on your primary monitor. There are several issues on the project's Github page that are requesting it.

Please add your support there, for example this issue: Taskbar on second monitor #130.

There has been some interesting developments on that thread.

I wrote a custom extension, I took inspiration from the 2panelsbottom extension on linuxmint.com, I also created 2 custom applets that are essentially copies of the window list applet that comes with cinnamon, only these show only the windows on each monitor, you also need 2 because as far as I know you cannot have 2 of the same applet loaded at any given time.

I will write out some instructions and upload the extension/applets somewhere later tonight.

Which was then followed up by this:

This could be great. Currently using two monitors, have to move the mouse all the way back to the other screen to access the list of windows. Is there a better way?

Along with this suggestion:

have a look at morePanels-Extension http://cinnamon-spices.linuxmint.com/extensions/view/30 You can configure top and bottom panel for each monitor separately. with the window-list-multi-monitor applet you can get up to 2 panels per monitor and different window-lists.

Attention: the extension makes heavy use of monkeypatching. Because i have to overwrite a lot of functions. The two panels are hardcoded(!) in the layoutManager, appletManager, the main.js file and so on.

using it at Cinnamon 2.2

Just so it's clear. The 2 extensions referenced are as follows:

This extension modifies the "Classic" panels layout on dual monitor systems so that the second panel appears on the secondary monitor.

Use in conjunction with the window-list-multi-monitor applet I also created and you'll have more of the traditional gnome 2 multi monitor experience much of us used to have.

This applet should be used in conjuction with dual-monitor-panels extension I wrote to create more of a gnome 2 experience many of us dual monitor users once enjoyed.

The extension is simply a fork of the stock Window List applet, but you can add 2 instances, and configure them to show only the windows from one monitor.

This thread might be old but I've just stumbled upon dual monitors and panels. Using Mint 17.2 and cinnamon. You can Modify-->copy applet configuration on your main panel, and then paste it on your secondary monitor/panel. Some of the applets cannot work on both so mint will skip them. Works like a charm right now for me.

A workaround in Cinnamon is to change which monitor is the first/secondary, then the panel will follow. I learned today that cinnamon-control-center's tool for screen settings allows you to do this.

NOTE: You can also access this via cinnamon-settings too! 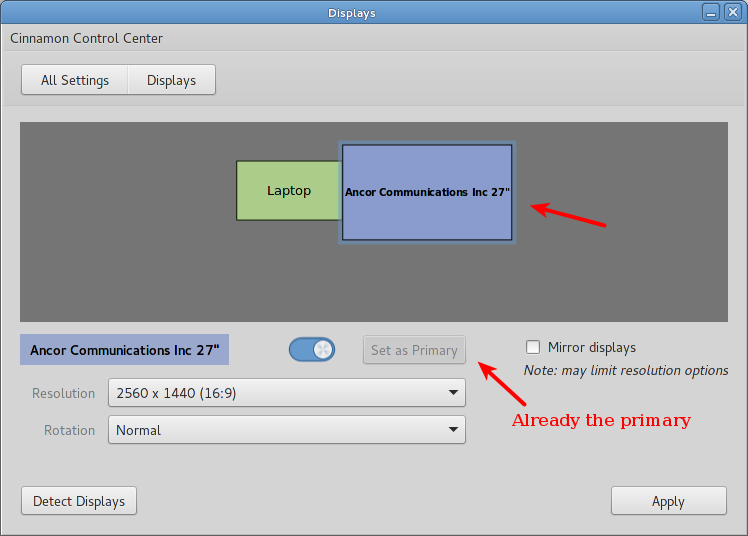 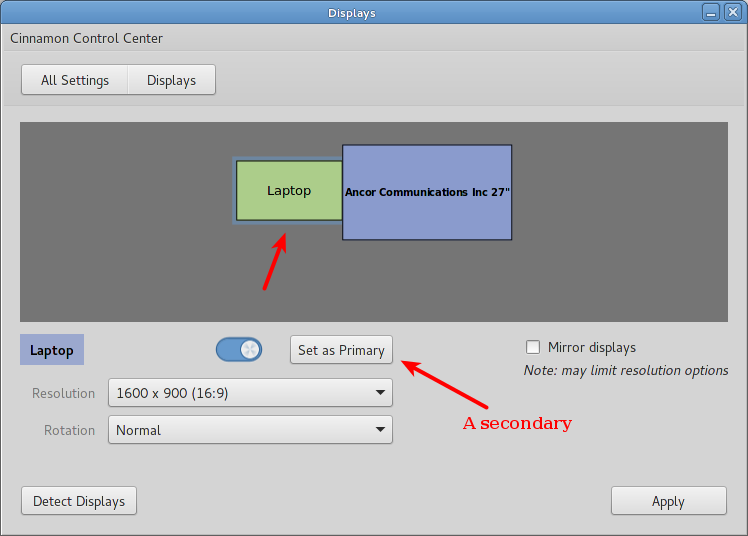 (We are not the only ones struggling to find this setting: https://bugzilla.gnome.org/show_bug.cgi?id=636216 )

I'm not sure about Cinnamon (GNOME3), but in XFCE you can have multiple panels, which remember where they are to appear. I would expect Cinnamon to be able to do the same. If not I would suggest trying XFCE or using xfce4-panel in the Cinnamon session (possibly as a replacement for its native panel).

The only caveat I'm aware of is that some panel elements (e.g. notification area alias systray) cannot appear on multiple panels at once. This means, that when you disconnect one monitor, the panels move to the remaining one and you have to make sure the ones you want are on top.

In MATE, right-click on an existing panel, select "new panel". It creates a panel somewhere on the existing monitor. Hold down "alt" and drag the panel to the second monitor. Then you can configure it however you want. Works with MATE 1.14.1 under Mint 18.

my workaround is following: create 4 panels on the main monitor. If you create another one (5th) it will be created on one of the other monitors.

There is now an extension which looks to give you what you want in Cinnamon. The name of the extension is called: MorePanels.

morePanels is an Addon for all the multi-monitor users who want to have...more Panels! I can't get that this is not implemented in Cinnamon. It's a known Issue(feature request) since 11 Jan 2012

I had to monkeypatch a lot of stuff, because the two panels were hardcoded in the cinnamon-ui. Please leave me a comment when something went wrong.

Not the answer you're looking for? Browse other questions tagged linux-mint cinnamon multi-monitor or ask your own question.

32
Separate workspaces on each monitor
9
Dual monitors and panels

4
How to change the default "fullscreen" monitor?
25
Setting primary monitor in XFCE?
1
Resolution and scaling issues on dual monitor with nvidia (one 4k HiDPI, one VGA with converter)
0
Dual Monitor Setup Weird Problem in Linux Mint 19.2