Is it possible to run a script on power button press with systemd?

I looked around and didn't found anything on this, for what I've seen, people always have been satisfied with what logind.conf is offering, here is the interesting part of man logind.conf:

I then repeat the interesting part here:

Controls how logind shall handle the system power and sleep keys and the lid switch to trigger actions such as system power-off or suspend. Can be one of "ignore", "poweroff", "reboot", "halt", "kexec", "suspend", "hibernate", "hybrid-sleep", and "lock".

Or I am in the wrong way and this is just for keyboard keys, and not power button?

In any case, previously, it was easy with acpi, one just had to replace the power_button script in /usr/lib/acpid/, isn't there something equivalent for systemd ?

NB (IMPORTANT): How can I run a script on keyboard power key press with systemd? is NOT a duplicate since has been wrongly marked as duplicate of How to change Power button shutdown action to run a script under systemd that DOES NOT answer my question, since this is to manage power key from keyboard, not power button:

And as suggested by @TooTea it may be true that button integrated into the case is seen as a keyboard button press, anyway, after having checked I have no such /dev/input/by-path/platform-i8042-serio-0-event-kbd file to monitor key pressed, then it definitively does not answer my question.

Finally I found a solution, but by luck because I'm using openbox:

And in my case under LXDE, then, edit ~/.config/openbox/lxde-rc.xml and in <keyboard> ... </keyboard> section add:

For example for my test I just open a popup saying "Power off pressed":

Then in a terminal type openbox-lxde --reconfigure so that it is taken into account, press your tower case power button and the following message will appear:

Edit: I forgot to mention (but not sure this is mandatory), I have system shutdown button set to nothing, to check this, go to "Start menu" -> "System" -> "Preferences" -> "Power Manager", and ensure that "When power button is pressed" is set to "Do nothing": 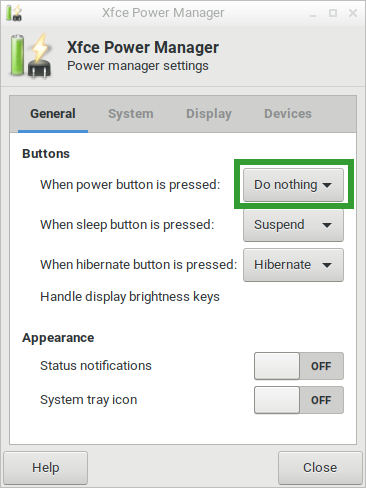 Not the answer you're looking for? Browse other questions tagged systemd logind or ask your own question.

4
How to change Power button shutdown action to run a script under systemd
2
How can I run a script on keyboard power key press with systemd?

0
Powerbutton freezes applications
3
Centos7 on NUC suspends when power button is pressed
7
How to execute scripts in /usr/lib/systemd/system-shutdown/ at reboot or shutdown?
9
How can a systemd service detect that system is going to power off?
4
How do remove a systemd-inhibit block?
4
What does logind.conf `IdleAction=kexec` do exactly?
2
How can I run a script on keyboard power key press with systemd?