I have several older Dell laptops and have been putting them to good use by installing Linux and BSD Unix. I wanted to learn OpenBSD Unix so I installed it on a Dell Vostro 1500 I have with 2Ghz Intel Dual Core Processor, 2GB RAM, and 120GB Hard drive. The install was no problem at all, a USB install using the fs file, and the default FVWM window manager works perfectly, but I was hoping to use Gnome with OpenBSD, like I do with two other dell laptops. I have one with Fedora Linux, and another with Kali Linux.

So I installed Gnome from the command line, as root using pkg_add, from the NYC OpenBSD Mirror. Gnome version 3.2 was installed, I also made sure to install all patches, before trying to install Gnome. And also installed gnome-extras.

Then I disabled xenodm using rcctl command, and enabled multicast messagebus avahi_daemon gdm, also with the rcctl command at the command line, as root. Then I rebooted, Gnome appears to run, but anytime I open up an application, all I get is a black screen, like in the photo, it is Gnome initial setup that is blacked out, also terminals and text editors are the same, all black. I was just curious if anyone had experienced the same problems? I have a second Dell Vostro 1500 laptop with Fedora Linux, and gnome works perfectly, same exact hardware as the OpenBSD dell laptop, also I have Kali Linux on a Dell e6400 laptop, and Gnome runs perfectly on that laptop also. 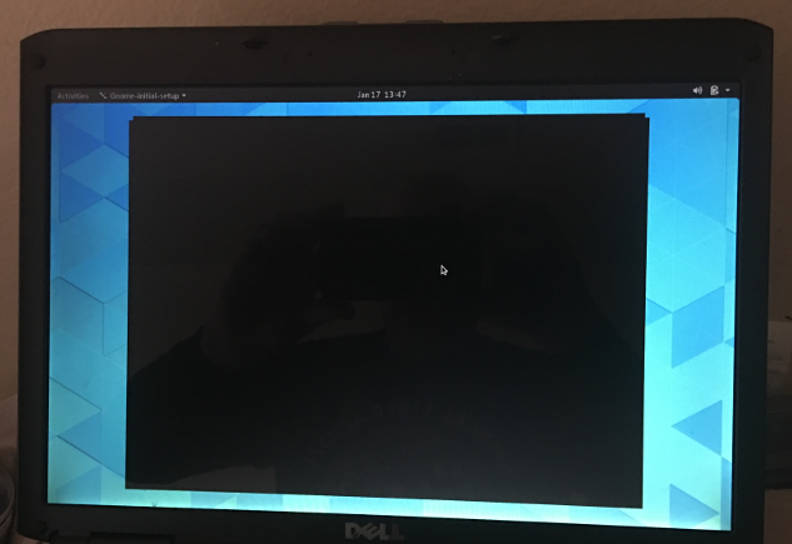 Ok this problem is now solved!!! The solution was to use sysupgrade -s, then the computer will reboot, upgrade, and reboot again, which upgrades to OpenBSD 6.6 -current, Then reenable gnome using rcctl commands, and disable xenodm using rcctl, and reboot, then Gnome works!

Also, very important, if you get an "ftp 404 not found" error while running the sysupgrade command, then change the /etc/installurl file to the following:

Not the answer you're looking for? Browse other questions tagged gnome openbsd or ask your own question.

1
reinstall all FreeBSD packages with pkg_add, pkg_info
4
How to mount an OpenBSD hard disk image on Linux?
1
Rhel 7 not booting up
1
What “bad list v: No such file or directory at -/usr/libdata/per15/OpenBSD/Pkg_Add.pm line 1115” means?
6
Gnome desktop environment: how to get it working on OpenBSD?
0
How to install AMD Catalyst on Fedora 22 with GNOME?
6
Incorrect UTF-8 accents in vi/vim on OpenBSD 6.2
0
OpenBSD Unix USB Install, BIOS Recognizes hard drive, but OpenBSD Install does not recognize
0
OpenBSD Unix Wifi Wireless Networking IDIMAX N150 USB Wifi dongle issue