Are there any color filters for color vision deficiencies? (Deuteranomaly, Protanomaly)

I have red-green-weakness (a bit of both, deuteranomaly and protanomaly) and on Windows there was a very helpful feature to convert the for me difficult-to-distinguish colors to nearby ones on the color spectrum per system-wide color filter. Is there something similar I could use on Linux distributions?

I'm currently using Xfce as desktop environment, but would have no problem switching to another if that means I could use such color filters again. So far I haven't found anything on the topic, the closest being gnome-mag, which had different colorblind options that could be enabled for panels, but had its last release in 2010 and seems to belong to gnopernicus, which had its final release in 2006 and is replaced by Orca. For Orca, however, I couldn't find any color filters, and gnome-mag was dropped before gnome 3.

In the meantime, I will look into how I could port CIE coordinates into an ICC profile, as this may result in what I'm hoping for, but unfortunately, I have no experience with either.

I've made some advancements with the ICC profile approach. I've looked a lot at how color deficiency simulation works and even found some open-source algorithms so that I don't have to do the implementation myself. With some small injections to the code, I modified the algorithms to spit out CLUTs, which I was able to then successfully convert into ICC profiles. These behave like desired: When applied to the system, anything pictured is displayed as a color deficient would (probably) see it. I still have some problems with understanding which whitepoint suites which use case best, though.

Still, if I can achieve similar results with daltonization (the process of 'correcting' color for deficiencies) instead of simulation, this should be what I'm looking for and would also work anywhere where ICC profile can be applied, which seems to be the case for all major OSs.

However, the algorithms I found for daltonization so far don't really convince me, so I'm trying to write one myself, and because I don't have much time to spend on this project at the moment, this might drag on a bit.

There is also compiz settings manager, that will let you tweak some adjustments. I use both in xfce, although for other purposes.

Xcalib works on the hardware level, i.e. the changes will affect all applications at once. Compiz on the other side, lets you pick selected application windows and apply the effect only to them.

Apply a color profile to your display (profile must include the 'vcgt' tag):

(source of the profile: https://github.com/OpenICC/xcalib/blob/master/bluish.icc)

Some effects can be applied manually even without any .icc profile:

Combine both above to obtain green inverted display: 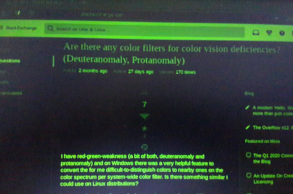 Not the answer you're looking for? Browse other questions tagged gnome xfce colors color-management accessibility or ask your own question.