I have been trying to install Manjaro in a VirtualBox several times now and every time there is some failure. This latest install attempt with Manjaro-Architect seemed to complete despite a small hiccup when trying to add a key-file to the LUKS-encrypted system. But in the end, everything seemed to complete. However, when trying to boot I am dropped into an emergency shell. The system I'm trying to create is UEFI with LVM over LUKS. I also made a separate encrypted /boot partition. The LVM partition has 3 logical volumes: for /, for /home and a swap partition.

So, when trying to boot, the first thing I encounter is a prompt asking me for a passphrase. When I type it in, after a while GRUB says something like "Slot 0 opened". But after a few seconds I get "no such device" error followed a UUID for the LVM logical volume where the root of the filesystem is supposed to reside (see attached screenshot): 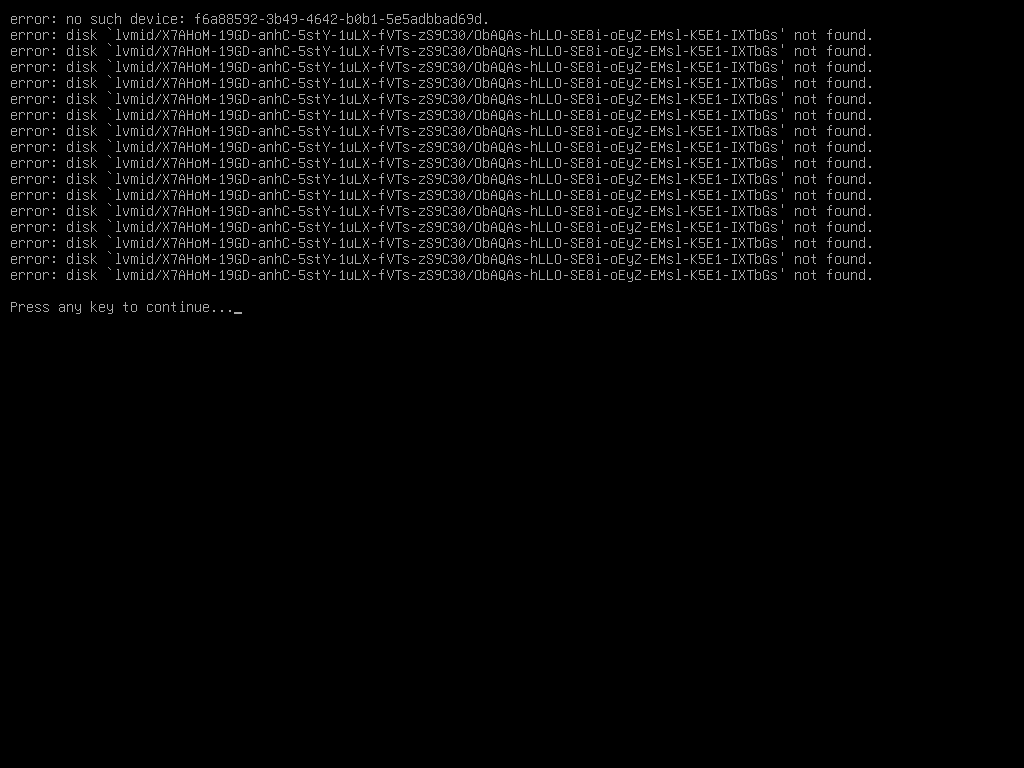 followed by a rootfs prompt, where I can't do much. Doing a listing I see that the system is completely messed up, fstab has 0 size, and a folder named /new_root is present but empty. Obviously, the installation did not complete and something is wrong, but I can't figure out what. And I don't know what to do next! A search on Google didn't yield much useful information. Some help would be greatly appreciated. I first asked this question on a Manjaro forum, but after several days there were no answers, so I'm posting it here in the hope that someone knows what to do.

5
LVM Ontop of LUKS using Grub
2
GRUB doesn't find /boot in LVM
1
Automatic unlock LVM partitions with a Key LUKS dm-crypt
2
How to install Arch Linux root file system on LVM thin LVs on LUKS on GUID partitioned device?
3
Corrupt Filesystem after Hibernation
4
Is it possible to unlock multiple LUKS devices to form a LVM at boot?
2
Booting from LVM on encrypted device
0
How to boot an encrypted Debian, from an unencrypted Ubuntu?