I am trying to remove the DNS that I have set to 8.8.8.8 previously but cannot seem to see where it gets the DNS from.

In my wired connection I can see the DNS: 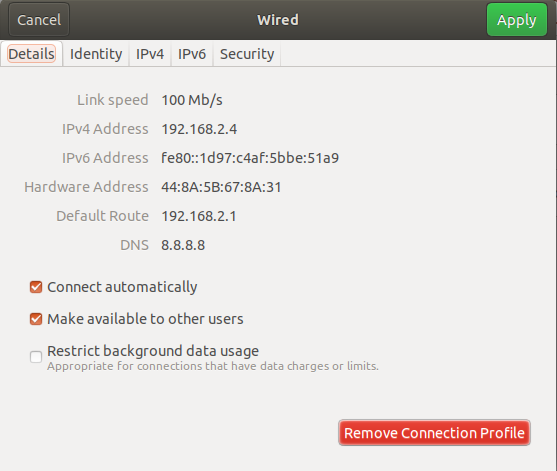 Any help would be appreciated.

EDIT 2: I found out that on the file ```/etc/dhcp/dhclient.conf`` I had the following:

How do I resolve this from keep appearing as it keeps my productivity low with the need to wait for 5-10 seconds for a website to load?

resolv.conf indeed contains the DNS-servers that should be used. But ubuntu now uses systemd which provides it's own DNS-server.

You can change the final dnsserver(s) that systemd uses with:

Systemd allows you to use different settings for each networkconnection, which is why you also have to specify the network-interface.

Suppose you want to make sure that all dns-requests that are sent out on interface eth0 are being sent to 8.8.8.8, then the command becomes systemd-resolve -i eth0 --set-dns=8.8.8.8.

You can run this command for multiple interfaces if you need to make sure that in all these cases the same dns-server is being used.

PS: You will probably already know this, but I'll mention it anyway: Replace SOMESERVER by a IP-address instead of a name, because otherwise you would have a circular problem

Not the answer you're looking for? Browse other questions tagged dns or ask your own question.