How to automate selections when installing via CLI

I'm installing Nvidia drivers and have to click through screens like this (not this specific screen, but this is the installer and has some OK and some Yes/No questions during install): 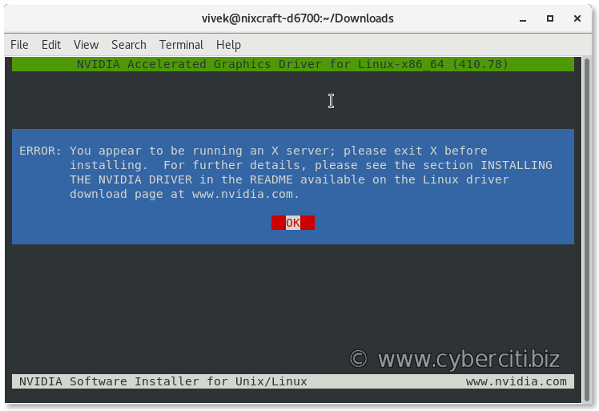 Is there a way to automate this? (my goal is to eventually do this via puppet)

Yes, I've done this before. Took me a few days to get it to work.
NVIDIA.....run -s for silent mode.
I found this option by using the Advanced help feature:
./NVIDIA....run -A

Note: Run it manually and choose all of the defaults to be sure that this is what you want (usually, that will be the case).

EDIT 1:
There are some options that can be specified on the command line to over ride the default values.
NVIDIA...run -A > /tmp/NVIDIA_Help.txt is what I ran to find them.
-X or --run-nvidia-xconfig will run the x-config utility.
--x-sysconfig-path= is the path where the X config files will be installed. Check here for other options you may be interested in.

EDIT 2:
My .run files is named NVIDIA-Linux-x86_64-390.67.run. The firs part of this file is a script. The remaining is an imbedded tarball (on Linux).
When I look at this file, in the first 10 lines or so is an entry that reads skip_decompress=1082 \n size_decompress=42. The first 1081 lines of this file are the script that decompresses the tarball and executes the installation script called ./nvidia_installer.

You should also see a function (mine is called catDecompress) that reads the file from line 1082 through the end and untar's it. On my .run file, it looks like this:
tail -n +${skip_decompress} $0 | head -n ${size_decompress} Later, when this function is called, it is directed to an output file.

There is an option to uncompress this for you. I'm including it here so that you will understand what it does so that you can re-do it later.
Once you have this decompressed, you can change the install options in nvidia-installer to suit your needs (change the defaults to what ever you want), then re-compress the file and append it at the end of the .run script.
NOTE: There is an MD5 checksum in the header of the .run file. You will have to update that as well.

Not the answer you're looking for? Browse other questions tagged command-line software-installation or ask your own question.

5
Enabling or disabling one monitor in nVidia Twinview on the command line, like with nvidia-settings
7
Ubuntu 14.04 Nvidia proprietary drivers installation
2
Broken dependencies when installing CodeLite 8 on Linux Mint
3
How to install and set new themes in KDE plasma via terminal
0
Can't install packages from PPAs (Elementary OS)
1
How to use apt to install specific packages from within Debian Installer?
0
an app is not installing and fails with vcredist_x86_2013 Using Wine 3.8
0
Redirecting stdout and stderr when installing software