Origin of the word console in computing

Nowadays within the programming community, console mostly refers to a text-based environment, either software (shells, terminals, cli) only or hardware included. But why is it so called?

There’s a similar question on Retrocomputing.

The earliest computers were controlled using cables, switches and buttons on panels on the computer itself, and provided output using lights. Eventually the control devices were “extracted” from the computer into a separate device; for example the IBM 704’s operator console, which still used switches and lights but was a separate cabinet (see the IBM 704 operating manual, pages 13 and 14). Later on this became a separate piece of furniture based on a desk, with a keyboard and some form of output device (a printer or a screen). This is reminiscent of an organ console which can be separated from the instrument itself.

On early multi-user computers, the console often had a special role: it was typically the only active terminal during early boot, and on some systems, logging in on the console granted more privileges than any other terminal. On most early systems the console was a text-only terminal, and that limitation has been associated with the term ever since. On PCs running Unix-like systems, the console generally used the built-in text-mode support, which probably helped preserve that association; but even on graphical workstations, emergency logins were typically text-only (albeit on a graphical framebuffer). 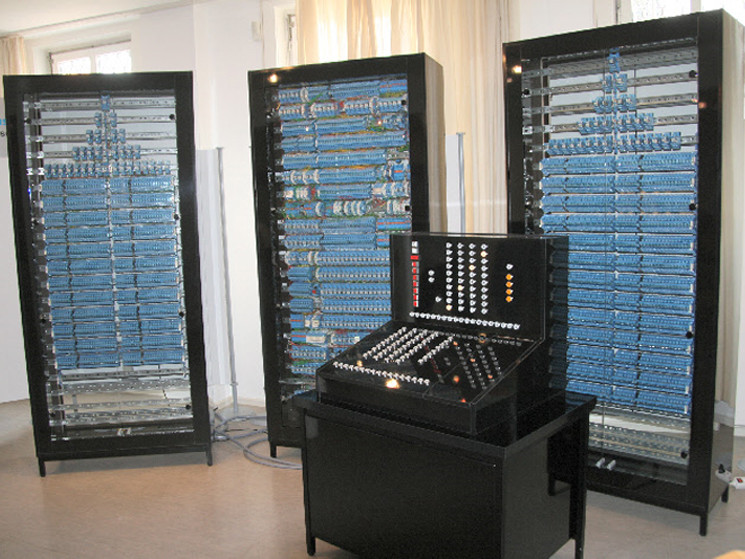 This pic of a Z3 (1941, but replica) is almost self-explanatory. Try "console" in google and compare the images. It's 50% neat tables, 50% digital devices. Here you see a console placed on a console in front of the calculator/CPU itself.

It looks like "console" started out as an architectural term in french around 1500. It denotes a kind of ornamented pillar or some kind of furniture to put vases etc. on. Harps also have it.

It really is connected to the verb "to consolate" - probably because the supporting structures often came in form of a human figures.

The term "console cable" appears 1810, they say, similar to "teletypewriter" (from where tty has it's name). See wikipedia etc.!

Cars also have it: "center console": a nicely made set of knobs and lights arranged for the driver (passengers have only a button for their own window - just a "terminal", one of many endpoints).

Pilots (and F1 racers) have a "cockpit". (We all know what that is. But check the etymology: very interesting and debated..."converging etymology")

Sysadmins (and init processes) can have the "console", users get the "terminals".

"console" refers not to "shell" or "terminal" nor "hardware", but to the essential builtin char device /dev/console, which the kernel sets up quite towards the end of initialisation.

This pic on computerhistory.org gives a overview of a 1964 reconstruction of a 1941 "Z3" System. That clumsy "laptop" (but lots of buttons!) on a piece of furniture is the controlling unit for the huge system in the background. I can't say if Zuse called that his "Konsole". Blueprints are lost in war, he is dead. German wikipedia says "Terminal" is "Konsole" is "data view device" (translated back).

Now compare to a picture of an organ where you see the impressive console (or keydesk) with the manuals in front of the impressive pipes. It is the same kind of complicated device controlling an even more complictated machine. In german organs are played only from the "playing table" it seems...

Not the answer you're looking for? Browse other questions tagged console history terminology or ask your own question.

6
In linux console (no X), how to stretch console screen to fit monitor
5
Cannot switch to console anymore after using Alt_R as mod4
7
Is it possible to view media on the console?
4
Console timeout blanks to white instead of black
2
Run mplayer using x11 from text console?
0
Using a CLI after deleting all shells (rbash, bash, dash, and sh)
6
Suitables TERM variable values for a serial console
2
Why is an executable called a "text file"?