How to use END {} in awk when there is no end to the input?

Say I'm using a command like tail -f ./somefile as input into my awk command. And I want to continually sum a count of matches using awk, almost like running a | wc -l at the end of a command, but where it would continue receiving the input...when AWK sums the input it displays it with the END{} part of the command but since it's still receiving input, the END{} part of the command never runs...so how do I get awk to keep receiving input as it comes from the tail -f ./somefile command? Is there a looping mechanism for this I could use in the awk code segment instead of using END{}?

You did not mention how exactly "matches" are being made, so I'm going to assume a line that matches /pattern/ {} rules would increase a count...

And I want to continually sum a count of matches using awk, almost like running a | wc -l at the end of a command

If the input is endless, I guess you would like to display the count every time it was incremented?

Basically, don't use END {} rule in this case; just print the counter out where you incremented it; like this example AWK program:

This program will count (and display the counter value) every time a line COUNT or HERE appear in the input.

If you have a lot of patterns to match and would like to minimize code repetition, you can use AWK function to combine count and display into one operation:

Screenshot (both programs above give identical output): 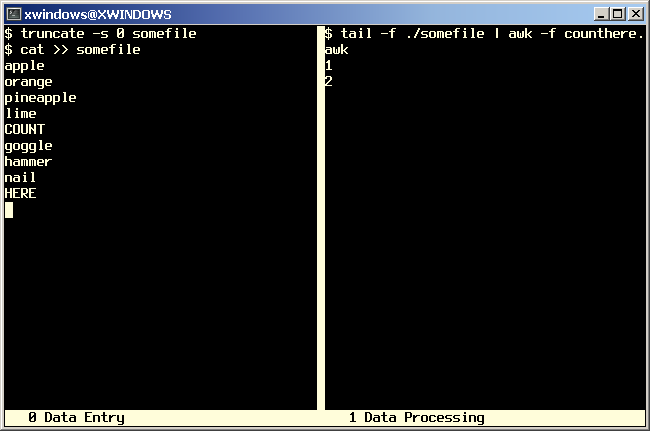 Not the answer you're looking for? Browse other questions tagged awk tail or ask your own question.