How to limit Docker total resources?

I have around 20 containers which can consume the maximum CPU and memory but not at the same time, so I cannot set the CPU and RAM limit, that's why I need to limit the total resource used by docker

First of all I've created a slice: I tried the instruction above, but impossible to limit both the RAM and the CPU usage

But when I try from a container:

I think I've missed something but I don't know what

For other person who will need a complete answer to this question, I'm doing a full recap:

First of all I've created a slice called docker_limit:

In order to verify all works as expected: systemd-cgtop, you should see processes listed under docker_limit.slice. e.g.: 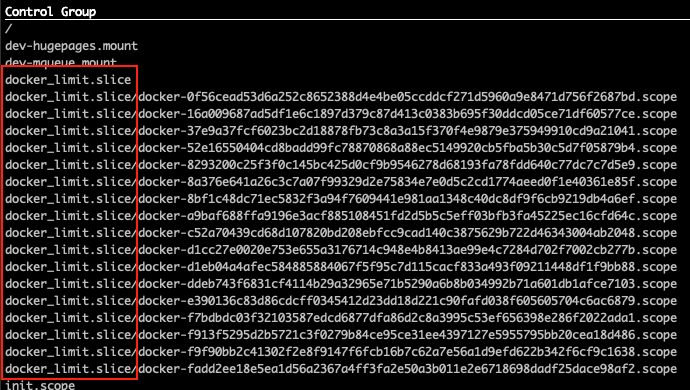 Prefix the cgroup_parent in /etc/docker/daemon.json with a /, so the cgroup name is absolute. Otherwise, docker will put the containers into a sub-cgroup of the daemon's cgroup:

Without the /, depending on your system, the containers might end up in /system.slice/containerd.service/docker_limit.slice or similar.

systemd-cgtop or systemd-cgls can be used to check where things ended up running.

I have a VM with 1 CPU and 2GB RAM (swap disabled).
Therefore I created the slice with next parameters:

And I made literally the same things as you, except native cgroupdriver in daemon:

Then I ran docker container with:

And opened my VM in 2 windows. In the 1st window, I ran stress. In the 2nd window, I ran the docker stats command. CPU was around 90%+-(htop confirm this and I saw some spikes to up to 91%) and when RAM was close to 1.2G, then this process exited with the message:

1
Hide HOST resources from a docker container
0
Systemd cgroup Problem - CPUQuota doesn't work for high values, but for low values it does

1
iptables limit inbound connections to Docker container
43
Docker -- WARNING: No swap limit support
1
How do I install docker on RHEL 7 offline?
2
How to set the umask of Docker service with systemd
2
Why are my resource constraints not respected?