I have been trying to get two screens with different resolutions to work in the configuration shown in the images below. Plain Ubuntu had no problems making them play well together, yet on my new installation of Ubuntu MATE, I get the following problem.

In particular, even though you can move windows around on the entire screen, edge snapping will force a window into one of the three areas highlighted in the second picture. The rest of the available space goes unused.

Similarly, if you attempt to maximize a window, it will maximize to one of the same areas, as shown in the bottom two shapes.

This behavior can be tuned by scaling the x-axis through xrandr, allowing for more "usable" space, but it never looks quite right, and the scaling parameter has a max limit that prevents me from making it work that way.

If I set the higher-resolution display as primary, there is no such issue.

My machine is a Dell XPS 13 9670 Developer Edition that appears to not have external drivers to install. I'm currently running Ubuntu MATE 18.04. The problem does not exist with the shipped OS (Ubuntu 16.04) 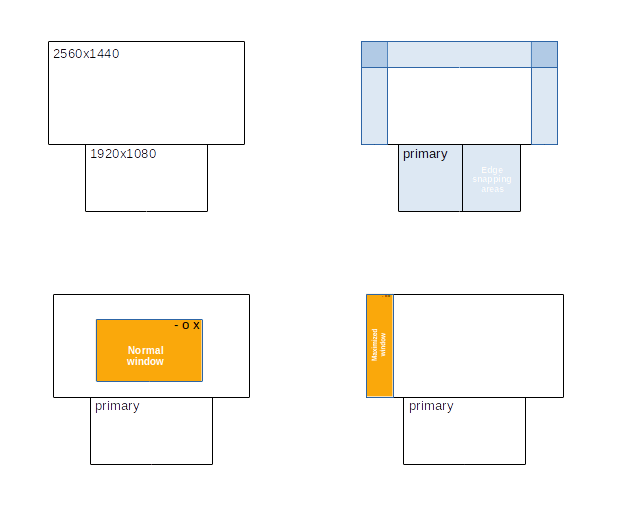 Answering my own question, in case it can help someone else.

Not the answer you're looking for? Browse other questions tagged ubuntu linux-kernel drivers xrandr mate-desktop or ask your own question.