Problems with KDE Plasma after upgrading to Debian 10: too bright and glowy, favorites and panel icons are missing

I upgraded from Debian 9 to Debian 10.

Problems I had during the upgrade:

These two problems have to do with this file: ~/.config/plasma-org.kde.plasma.desktop-appletsrc. The fix described at rglinuxtech.com/?p=1626 (deleting [Configuration][General] entries and renaming [Configuration] to [Configuration][General]) didn't help much. The icons show in ~/.local/share/applications/ but not in ~/.local/share/plasma_icons/. I already tried kbuildsycoca5. The file still contains all my favorites but Plasma does not load them. I can still add favorites and add apps to the panel (widget).
When I add one of the apps to the panel that are already present on it but whose icons doesn't show and then make the other entry in plasma-org.kde.plasma.desktop-appletsrc look exactly the same the newly added app icon shows but the old one doesn't. This is because when I add it anew it adds a new file to ~/.local/share/plasma_icons/ while the other one's icon is broken because in the file it says "Icon=unknown" (the only difference is that the new entry links to the new (1) file): 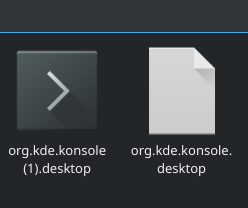 Also when I completely delete the plasma-org.kde.plasma.desktop-appletsrc file so it gets rebuild I get the old wallpaper and not the new Debian 10 one.

Do bug reports for these problems exist? What's the recommended way to fix these Plasma/appearance issues?

Other new issues I have noticed so far:

Had the problems with the icons and favorites on another machine I upgraded too. Favorites are still there with icons but some of them are missing and the tray icons look the same - so that seems to be a bug in KDE. However I did not have these appearance issues with the brightness and colors and the border-glow is not too visible.

I have created a bug report for the problems after upgrade (not the two during upgrade) here: https://bugs.kde.org/show_bug.cgi?id=420561

The improvised solution to this is to just readd the favorites and panel applications and to calibrate monitor settings as described above (setting HDMI Black Level from Normal to Low etc). However, calibrating monitor setting doesn't make it look as good as before - there are still those strange window-glows and -shadows.

I recently tried it with my old graphics card instead of CPU-only and it's not too bright and "glowy" when using the graphics card. Strangely the graphics performance seems to be at least as bad as with CPU-only when using the nouveau driver and does have glitches where it shows green space across the screen which is why I removed it again. However, when using it I could change the HDMI Black Level from Low back to Normal. It could also be a bug in Debian but I only had this after upgrading from Debian9 to 10.

Not the answer you're looking for? Browse other questions tagged debian kde plasma5 kde5 or ask your own question.

3
Why does my graphics card have glitches and low performance with the latest nouveau driver in debian?

2
Is KDE 5 on Debian Stretch broken?
1
Gentoo start up kde error after installed kdm
17
KDE5 After resume from suspend I have corrupted labels under icons
1
Arch - KDE Plasma 5.7 and Latte Dock: Icons do not appear
1
No applications found in non-root user account
0
Problems with apt-listchanges after python upgrade (Debian)
0
KDE Plasma doesn't start (black screen) after upgrading Debian10->11
0
Audio missing after upgrading from Debian 10 to 11