I've got a Windows 10 virtual machine running on Ubuntu 18.04 host (QEMU 2.11). I've created a shared folder with the command line parameters -netdev type=user,id=smb0,smb=/mnt/ntfs,restrict=on -device virtio-net-pci,netdev=smb0. Mostly the disk works great, but in some use cases it shows very slow write performance, as can be seen in the last test result of CrystalDiskMark (random 4K, 1 queue, 1 thread): only about 0,09 MB/s (22 IOPS). 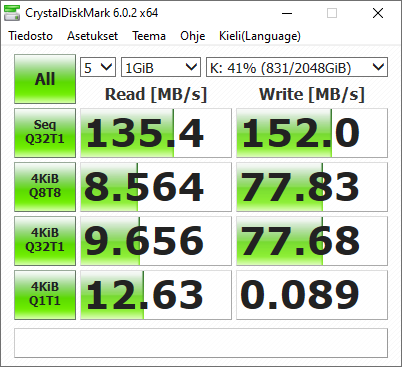 This shows up in practice also: creating and saving a 600 MB panorama from Autopano Giga 4.4 takes 1 h 45 min to the shared drive, versus 1 min 30 s to the normal drive. Copying the file takes only about 5 seconds.

Can this performance problem be fixed?

I removed the shared folder option from QEMU command line and launched a normal Samba server instead, with mostly the same config. The performance problem persisted when I mounted the drive through the user mode internal network (//10.0.2.2/ -> 127.0.0.1 on host). When I instead mounted it through another, bridged (tap) network device using the external (home network) IP (//192.168.1.11/), write speed went up to almost 28 MB/s (6800 IOPS)!

Reading the source code revealed that CrystalDiskMark uses DiskSpd to do the actual tests. If I deciphered the code correctly, the command line for the test in question is:

DiskSpd has a linux version, for which the following is mostly equivalent:

To rule out the possibility that Samba was working badly on the loopback interface, I tested the speed also on the host side (mounted with mount -t cifs). Running the above command showed excellent performance: 90 MB/s or 23000 IOPS; or a tenth of that with hardware buffering disabled (-Sh).

So I think the culprit must be QEMU user networking. The version of QEMU on Ubuntu 18.04 is quite old, and I have no idea whether this applies to recent versions or not.

Since a normal Samba server over bridged network works fine, I'll use it as a workaround, though I would have preferred to use the internal shared folder mechanism :/

Browse other questions tagged ubuntu samba qemu disk or ask your own question.

4
Networking and Samba from a quest OS running on qemu
4
Sharing partitions in qemu
31
Shared folder between QEMU Windows guest and Linux host
5
Change permissions for mounted veracrypt drive in linux
2
How to mount a linux host filesystem with FreeDOS running in qemu?
0
QEMU/KVM: How to configure a writeable shared folder for guest, which itself is a CIFS mounted network share on host?
1
Differences in networking between QEMU/KVM and VirtualBox
1
Make shared clipboard work for qemu