Does `fstrim` causes write to all free blocks every time?

I have Ubuntu 18.04 server with 500G SSD disk which has LVM and dm-crypt on it. I recently noticed that the number of bytes written to disk (as reported by vmstat -d or iostat) is unrealistically high. After monitoring the system I/O I found that the giant spike in disk writes happens once a week when fstrim.service runs: 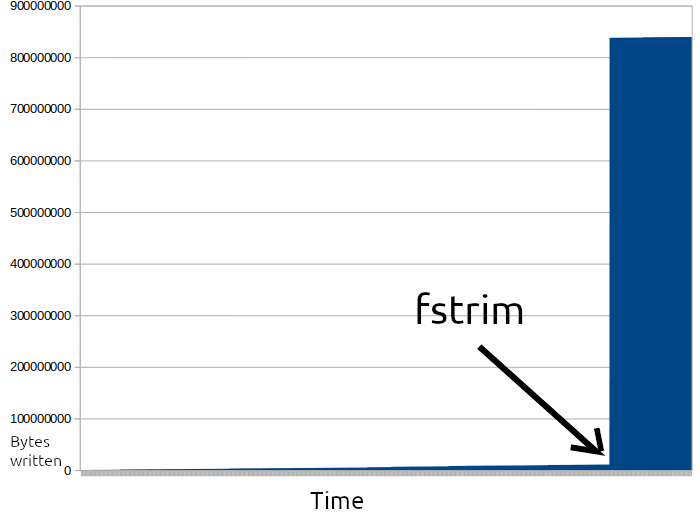 From the logs, it looks like every week when fstrim runs it reports that basically all free space was written to the disk, even though the system is almost at idle and has just under 10Gb written in a week at most.

Is this an expected behavior? I always thought that only new free blocks since last fstrim run should be discarded, but not the entire free space each time. This puts absurdly high wear on SSD (judging by media wearout value as reported by disk). Or is it somehow related to the presence of dm-crypt?

The disk does support TRIM:

And discard pass through is also enabled in dm-crypt:

ATA trim command only changes meta data in the disk drive, it definitely does not do any low level writes to the memory cells. If the disk supports deterministic trim a trimmed block is returned with zeros, this however is done by the controller based on the new meta data status and not because the cells were actually erased at the time of the trim command.

trim commands are unfortunately counted as writes in all kernel statistics I know about. So iostat or sar or /sys/fs/ext4/*/lifetime_write_kbytes give the sum of true writes and trims. See also question on superuser.

fstrim, when run once a week, seems to release the whole unused disk space. If you have, for example, a 1 TB disk which is 50% used, the default fstrim activity appears in the statistics as 500 GB written per week or 70 GB/day.

Bottom line is: the write statistics is easily dominated by trims counted as writes, especially for moderately filled file systems.

Not the answer you're looking for? Browse other questions tagged ubuntu disk ssd or ask your own question.