I need to be able to deal with Arabic file names and directories from terminal and I'd like to achieve that with xterm but instead of displaying Arabic characters it shows dotted rectangles (whether I type them in the prompt or they are being output). However, if I try any other unicode text, uxterm is able to display it normally. I suspected the font being used by uxterm didn't have the Arabic glyphs

so I randomly tried setting it to:

this worked and I got some Arabic to be displayed in uxterm. The issue is that I can't figure out a font which can display both Arabic, English and the rest of the unicode like the original fixed font did. I am also very fond of xterm's default font for English characters and I'd like to keep that. I think I read somewhere that (u)xterm is supposed to use a default font and then if it needs to display some glyph or character that isn't in that font, it falls to a second choice. Or that's not how it works?

xterm (uxterm is a script) uses either bitmap fonts or TrueType fonts. The resources indicated in the question are for bitmap fonts. To get "good" coverage of the Arabic, etc., would either take a large font or font-set support:

Here's a screenshot of Arabic using the ncurses test-program (page at U+0600): 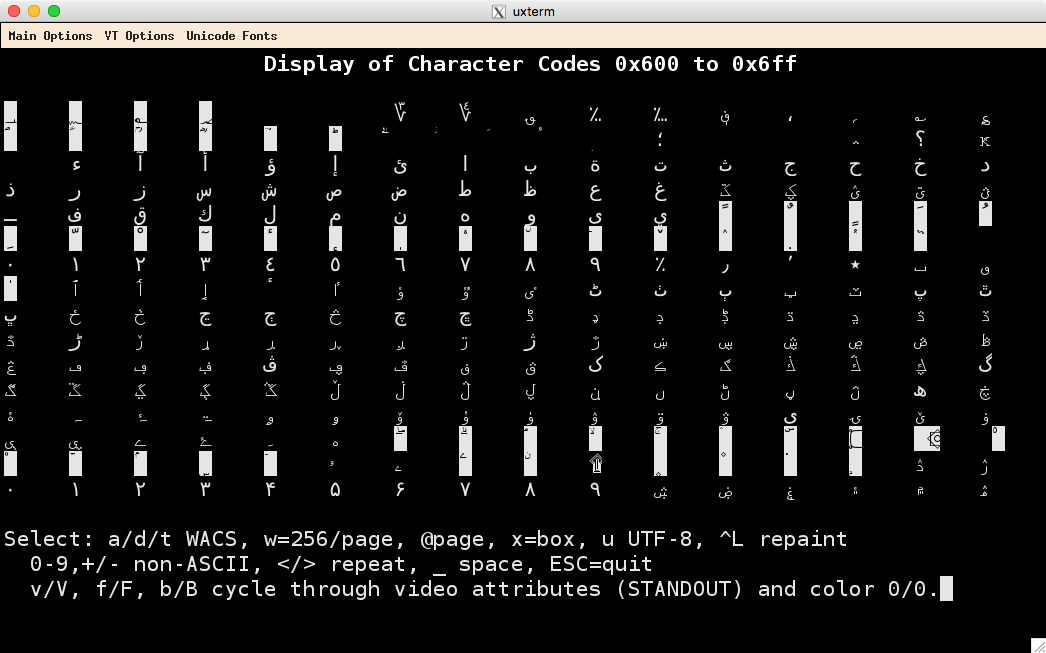 The highlighted cells are nonspacing.

The reason why there is no font-set support for bitmap fonts is that someone would have to manage the data to show which fonts are compatible and would be suitable. That's what fontconfig attempts to do (not always successfully). It can manage bitmap fonts, but the available information suggests that it will attempt to scale those, making the result worse than just selecting bitmap fonts directly.

Not the answer you're looking for? Browse other questions tagged fonts unicode xterm or ask your own question.