How to disable fullscreen mouse scrolling?

On programs that run in "fullscreen" mode, when I change the "fullscreen" resolution to something that is lower than what my desktop resolution is, I can scroll past the edges of the program by moving my mouse to the edge of the screen and see my desktop. This is really buggy and actually crashed my system, on top of being incredibly annoying.

How do you disable this? I don't even know what it is called, and I can't find ANYTHING except for this, really, unanswered question from 2003: https://www.linuxquestions.org/questions/linux-software-2/disabling-virtual-screen-mouse-scrolling-in-x-111237/

If anybody wants to see an example, then you can probably do it yourself by installing SuperTux 2, changing the fullscreen resolution to something like 640x480, then checking the fullscreen box, and moving your mouse to the edge of the screen.

There's not really a way to "disable" it. With modern X, you can use xrandr to change the framebuffer size as well (and I guess you could bind that to hot keys). But applications could still misbehave if they don't expect that, and don't support the RANDR extension.

Another option is to never run an application fullscreen, but instead always run it in a window, resize that window as necessary, and possibly convince your WM to render this window without a border. Might be a bit difficult to set up.

It's been ages since I played SuperTux, and it's quite old, so it's possible there's no way to make it work "properly" without changing it's source code.

I think ArandR can help you with this. Heres my demo:

This is my normal desktop working properly, DP-1 will be the subject of this demo. 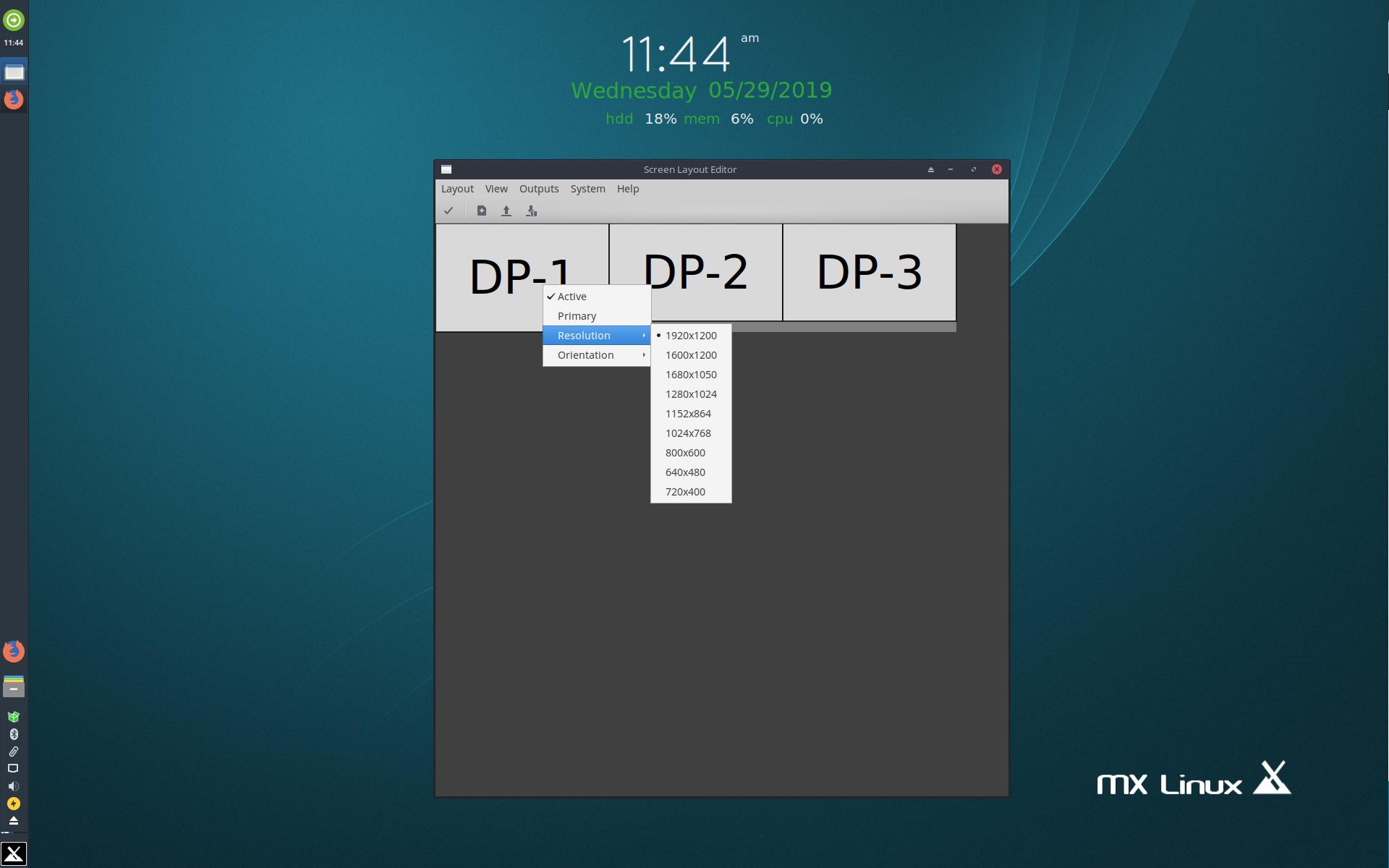 Here I opened SuperTux2. SuperTux2 appears as fullscreen on my machine but this is how it appears to my screenshot tool. 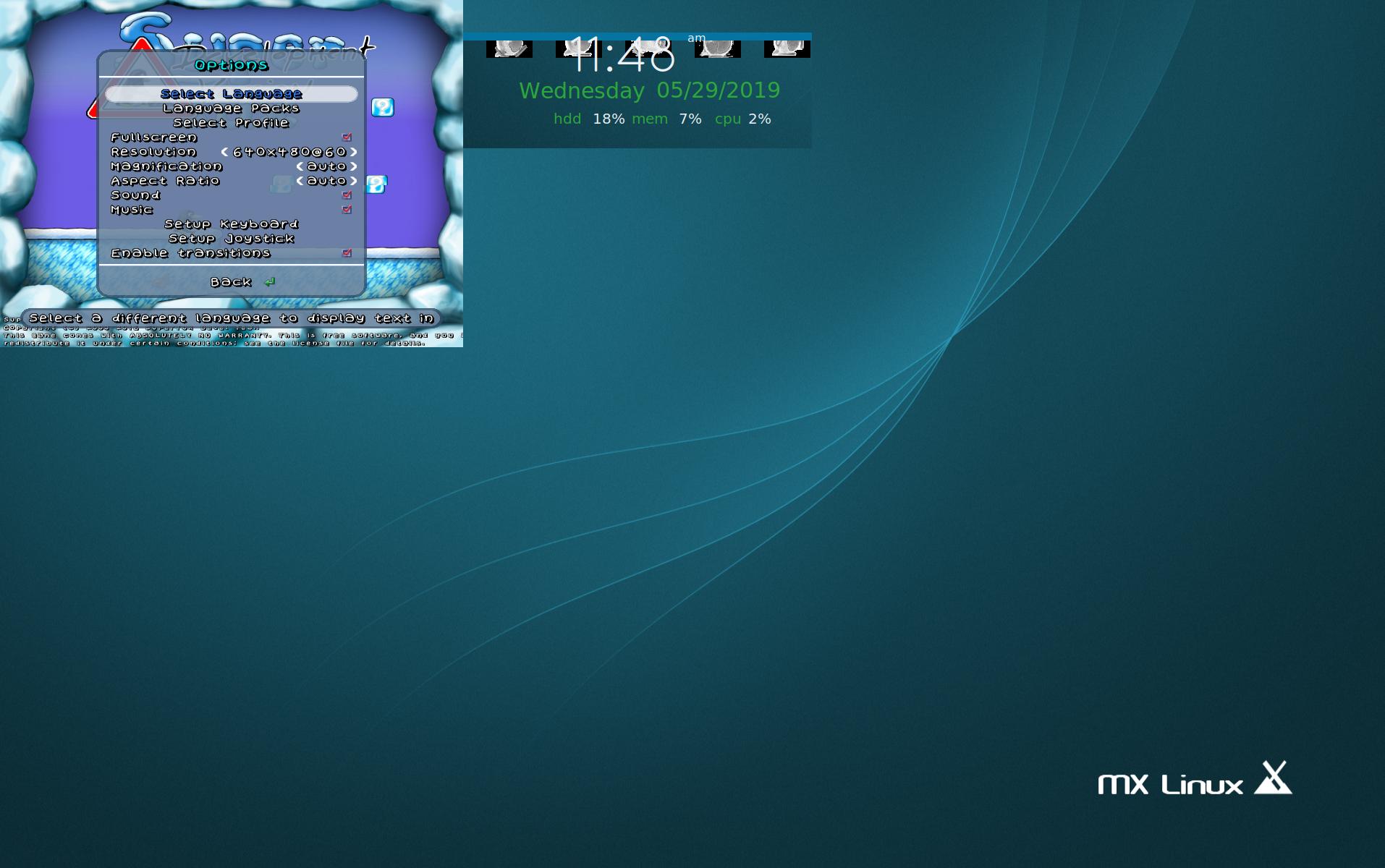 This is what clicking outside of SuperTux2 did to my desktop. 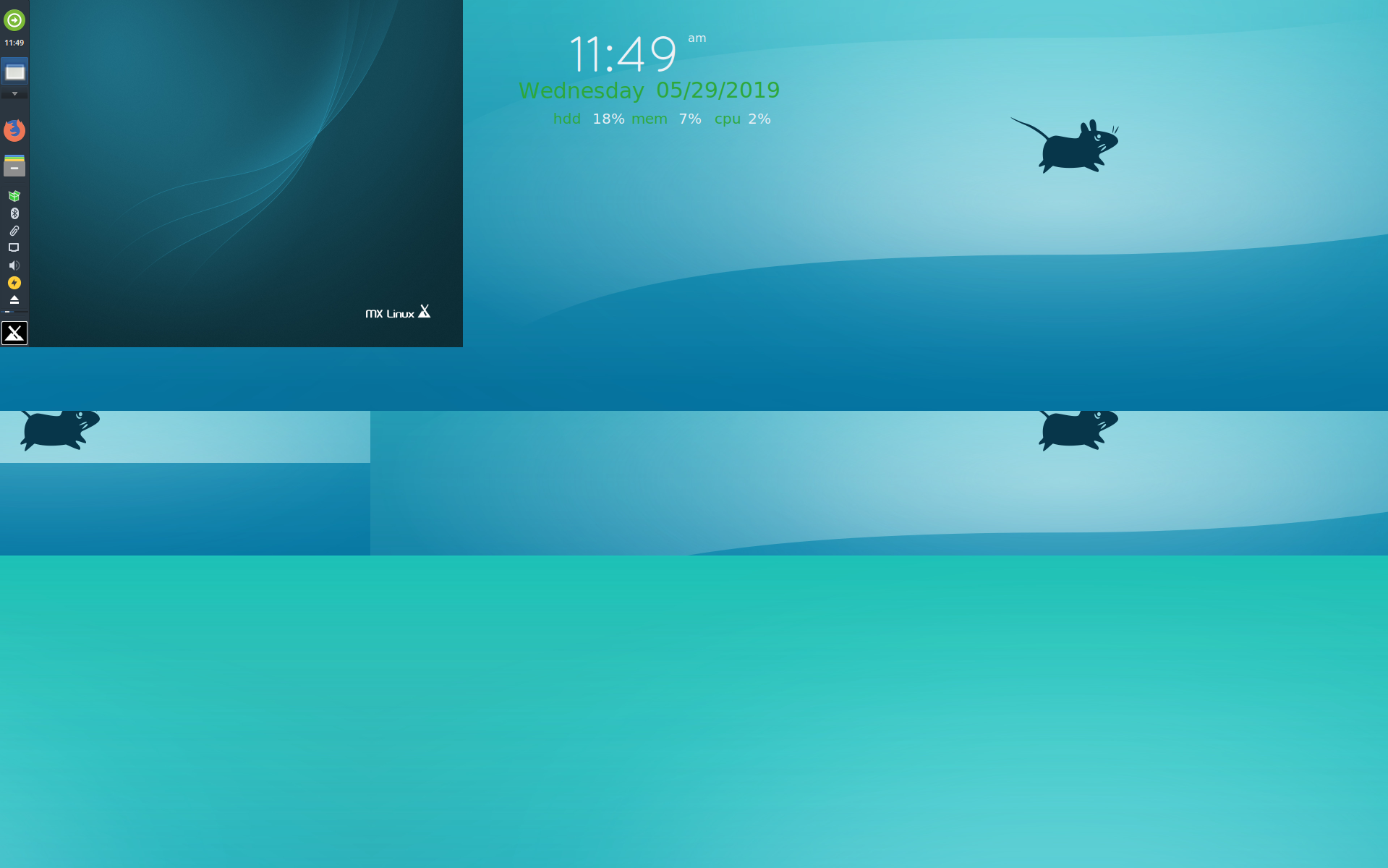 With ArandR we can reset the resolution of the desktop. Simply clicking the checkbox on the top left will set it back to my original configuration. 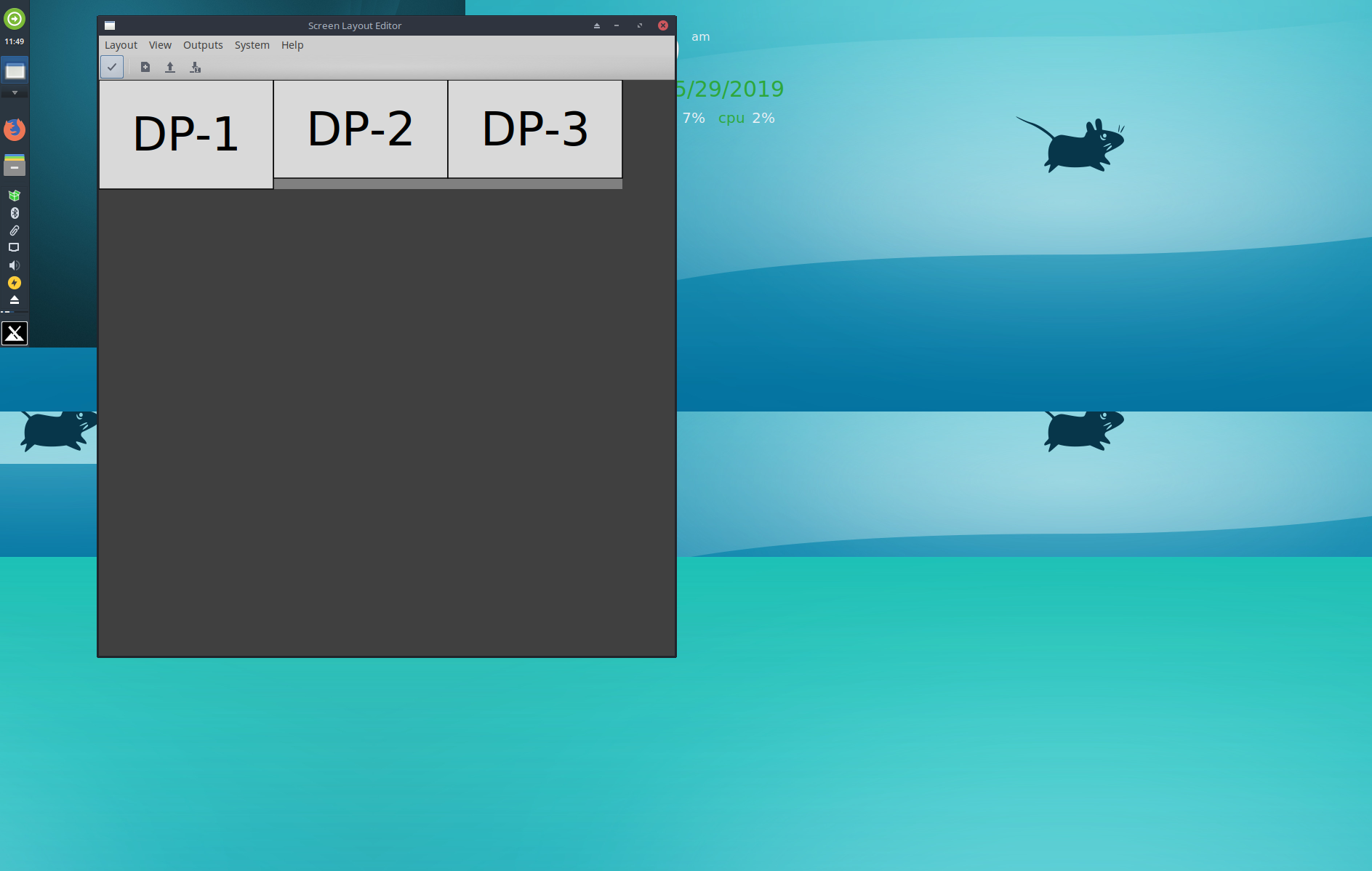 Viola! We are back, everything is normal again. 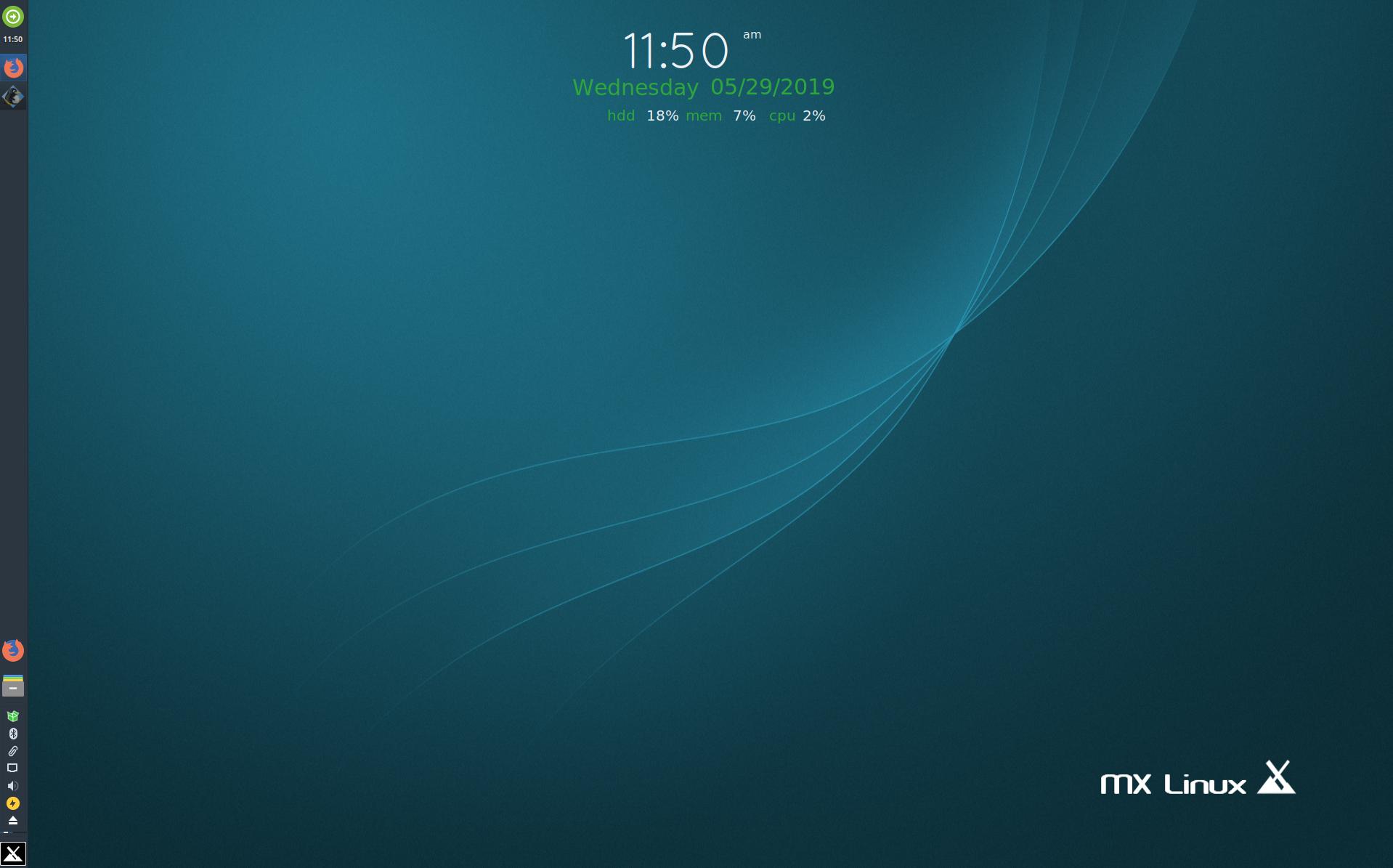 You could configure this manually in the terminal with XrandR, but I think that would be a lot more effort in this case.

It seems you'll need to either change your or reconfigure your window manager.

A bit of info leading me to this conclusion...

With the Xfce DE, my window manager is Xfwm4. I tested by installing and running SuperTux2 as you suggested, and I didn't encounter the problem you're having.

Then, looking at the problem from the other direction - that is, trying to figure out how I could make my system do what yours does - I found the following post that clearly indicates that the window manager is at the crux of the issue... Looking for Desktop Environment to spread window over several screens

I had the same issue when I switched from novaeu video driver to nvidia-304. Didn't have it before that.

I didnt understand what the screenshots above where showing, I have no checkbox in arandr.

I solved it by setting resolution before and after supertux2 in the desktop file execution command line:

Not the answer you're looking for? Browse other questions tagged xorg resolution scrolling virtual-desktop or ask your own question.

1
Looking for Desktop Environment to spread window over several screens