Determining the max RGB value (white) on a xterm-like terminal

One way to determine if a terminal is predominately dark or light is to get the value if its background color, and compare that with the grey color.

However in order to do this you need to know what the numeric RGB value is for white (to take half of that).

Thoughts on how to determine which of these two possibilities (and others if that exists) inside a shell script?

Note: this is similar to common environment variable to set dark or light terminal background but this question is more narrow.

shell terminal xterm
Share
Improve this question
asked May 17 '19 at 19:16

Presumably you are using something like the query described in XTerm Control Sequences:

xterm uses four digits (e.g., ffff) because that is the preferred form in the X manpage, which says:

If I had to make a script which detects the number of digits returned by some random terminal which responds to that control sequence, I would look at the red, green and blue components of colors 1, 2 and 4, because even with some distortion, those will still use the same number of digits as "white".

Here is a screenshot with xterm showing the results from a script which does that: 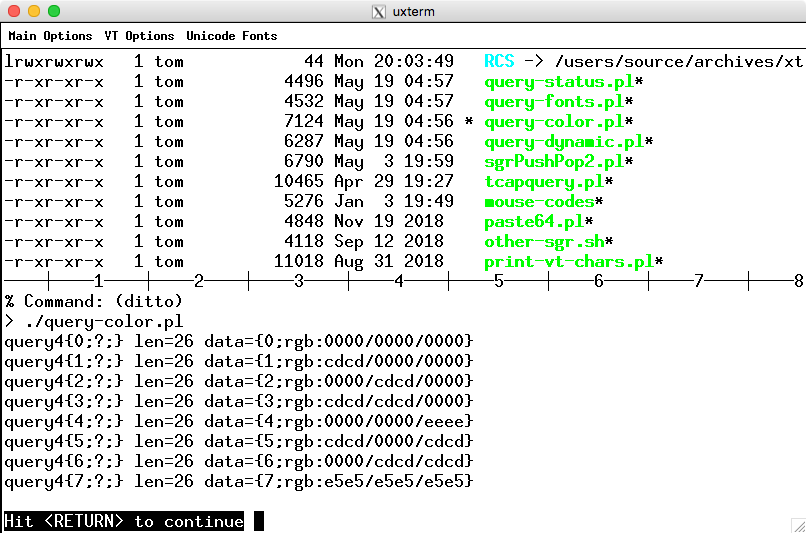 I checked a few other terminal emulators; those that did respond used the RGB components where the largest corresponded to ANSI (though two of the three that did respond, did not actually report ANSI colors -ymmv).

Not the answer you're looking for? Browse other questions tagged shell terminal xterm or ask your own question.

4
Can I make text in xterm looks and feels like gnome-terminal?
1
White terminal cursor and yellow Vim searches
9
common environment variable to set dark or light terminal background
1
xterm highlighting always white, not reverse
1
What's the purpose to launch a xterm from normal terminal
1
To what extent are the xterm, xterm-color, and linux terminal emulators based on VT100?
0
Bright background in termcap