I have a file with lines, just like this:

I want to create a duplicate file in bash that contains each line merged with the copy of next line, like:

which with your input, gives

What that sed expression is doing:

Same basic idea as the awk solution given by Torin:

Or, if you're into the whole brevity thing:

One can issue this command (credit to Conspicuous Compiler for suggesting this):

Alternatively and probably more customarily, start Vim and open the file and issue the ex command: 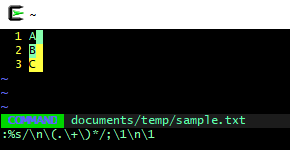 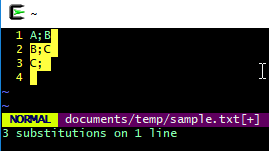 Not the answer you're looking for? Browse other questions tagged text-processing awk sed or ask your own question.

3
How to remove duplicate lines that begin with a pattern and the next line after that?
5
Text-processing only for conditions met from line X to Y
0
copy and paste text from end of line
2
How can I move parts of one line of text to the next?
2
Parsing each line in a text file using pattern matching
1
Match multiple patterns in text files on the same line, copy line to next line and modify string
0
Match multiple patterns in text file, copy and modify the matched line