I've been using my Raspberry Pi as a music file server, but I'm not happy with it. The current setup uses a samba server on my RPi with a WD Passport USB drive formatted as vfat. This serves as the library for my Sonos music system: Sonos mounts the drive, and lists all of the music it finds there in a menu for me to choose from.

The Sonos interface seems to operate smoothly with the RPi Samba server most of the time. However, it does not work so smoothly with my MacOS. I use my Mac to maintain the music library, and there are two primary niggling issues: 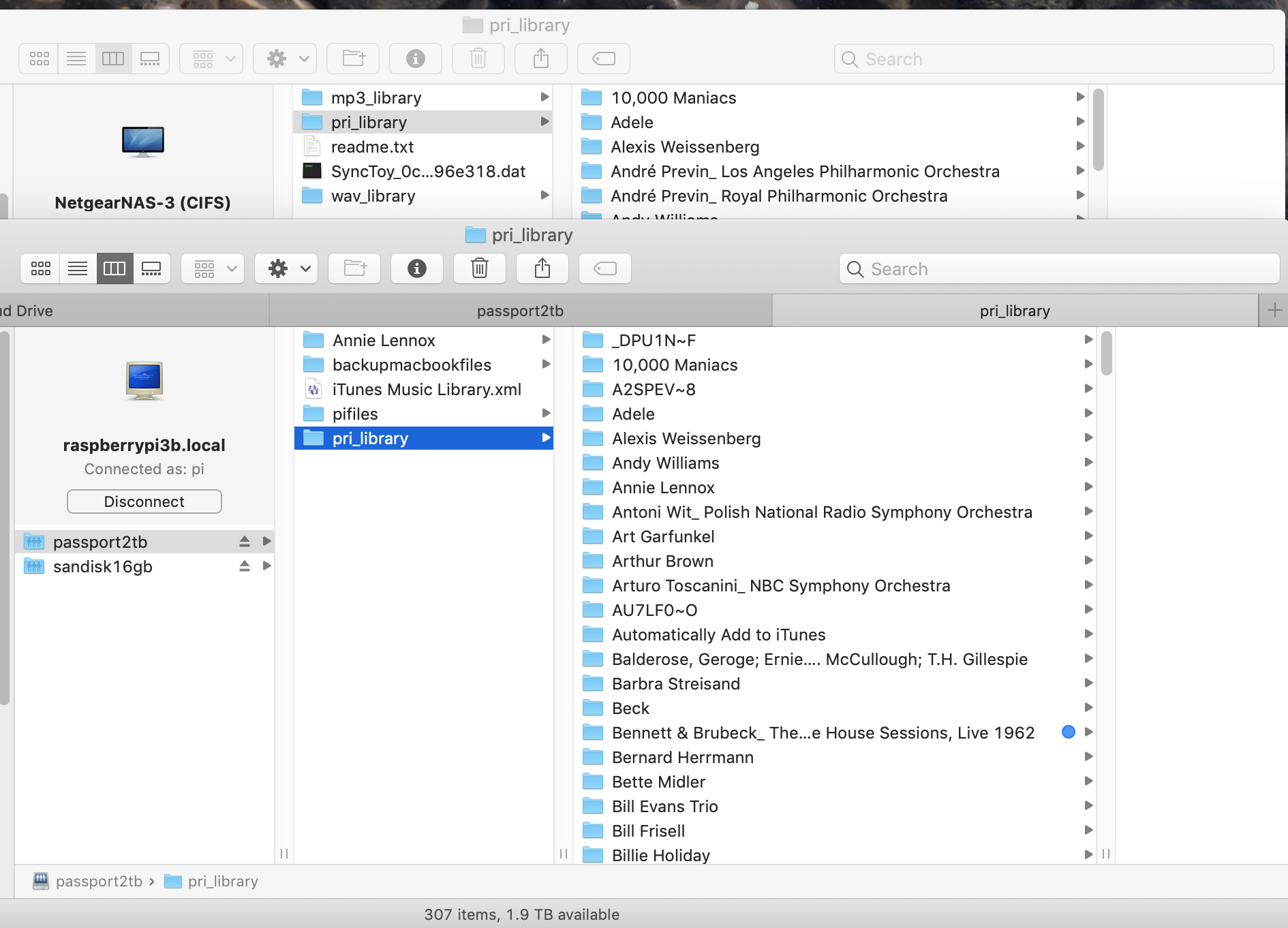 A friend uses a NetgearNAS as the fileserver for his Sonos system. It works very reliably, and the "artifacts" do not show up in Finder. His NetgearNAS is configured to use CIFS (and only CIFS). I'd like to try CIFS on my RPi, but my research so far has only added to my confusion.

vfat is a very limited filesystem, it's completely unsuitable to any networked use and any multiuser environment (it's the ancient MS-DOS filesystem). In short, don't use VFAT for anything but USB thumb drives, for maximum compatibility.

Basically all of your problems come from the fact that MacOS tries to store extended attributes, file rights, etc through SMB/CIFS to VFAT that doesn't support any of that, nor does it support very long file names, or UTF-8 file names, or anything of interest to modern users.

Just use a real, normal Linux filesystem on your USB drive (ext4, xfs) and all will be fine and dandy. That will certainly solve the problems with missing files, wrong rights and permissions, artifacts, etc.

Regarding the other questions:

For instance CIFS, originating from Windows, by default uses Windows ACLs, which unfortunately doesn't map one-on-one to the POSIX ACLs of most Unix/Linux filesystems. Nowadays Samba works around this by using extended attributes to store actual Windows ACLs, however if the underlying block file system doesn't support xattr, you'll have problems.

Let me try to answer a few of your questions.

First CIFS is a version of the SMB protocol. See e.g. the wiki page of SMB.

The second question was about file system vs. networking protocol. CIFS/SMB are networking protocols. The thing with the file system comes merely from the linux world: You can mount such a share like any other file system (assuming the rights) to be able to access the files transparently. So you have a mount.cifs program that handles the mounting process of this specific protocol.

According to you third question: No networking protocol is in any way related to the underlying file system. It only specifies how data are sent over the line (in an abstract way). The data might come from a hard disk directly (aka a file system) or might be generated dynamically (think what would happen if you exported your /proc or /sys folders....).

However, the protocol was designed with a certain use case in mind. This was the FAT system as far as I know. Extensions were made to allow for extended rights also under Linux/Unix. Here I am a bit weary what is possible and what is implemented (especially as both server and client must find a common maximum protocol version). Different software versions on the various machines might come into play here, but I am not sure.

Instead of giving you basic information that needs further investigation by you I will instead address some of your stated problems:

Your "omissions & artefacts" are due to codepage/charset problems. It happens only for non-ascii characters, right? I do not know how it is set up at the moment. Can you first verify, that the files on the USB device are written with correct names in the file system? Then verify that the RPi can read the files as well (without CIFS, go there using ssh or directly attached monitor/keyboard).

Different underlying file systems support different sets of characters in file names and thus SMB can be configured to treat the filenames differently. This is a feature to support as many underlying file systems as possible (see man smb.conf). This can also be a mount problem on your client, where the wrong encoding is assumed. So start by building up the system and verifying each step.

Regarding the user permission issues you mentioned, you need either authenticated access (user+password), configure samba/cifs server to use default user with default permissions or your storage is the problem. Again from bottom up:

Not the answer you're looking for? Browse other questions tagged filesystems samba raspbian cifs or ask your own question.

0
Why Samba needs the VFS module?
4
How do I mount a Windows folder with cifs on Raspbian
2
Virtualbox: Find Windows host DNS name on Debian guest
1
How to mount the "root" file system of a Windows Samba Share with cifs?
0
CIFS share available only via VPN. Firewall disabled
2
mount.cifs (cifs-utils): Where do the default options come from?
2
Samba server mount error - No such file or directory
0
Unable to change files/folder attributes on NAS sharing through samba server