Ask Question
Asked 2 years, 7 months ago
Active 1 year, 5 months ago
Viewed 4k times
0
This question already has answers here:
Why is Kali Linux so hard to set up? Why won't people help me? [migrated] (10 answers)
What should be in the sources.list for Kali Rolling Linux? (2 answers)
Closed 2 years ago.

i'm using kali and i'm trying the command apt-get update, but i got the following errors

what does it mean?

You've tried to install Oracle VirtualBox in Kali, but Oracle does not provide a VirtualBox update repository for Kali, since they don't support Kali. As a result, VirtualBox's installation script placed n/a in place of the release name.

Debian repository specifications have three parts: first is the base URL of the repository. The second is the name of the release whose packages should be searched for. Anything after that will be the names of the repository sections that should be used, if there are any; there may be zero or more of them.

You can use a web browser to take a peek into Oracle's VirtualBox repository. Here is the base URL:

There's a lot of Debian and Ubuntu release names from artful to zesty, but no kali-rolling in sight, nor anything kali* for that matter. At this point we know for sure that Oracle does not publish any version of VirtualBox for kali.

When n/a is written into the repository specification in place of the release name, the apt-get tool will actually attempt to access this URL:

and will attempt to find files named InRelease and/or Release in there. But the entire directory does not exist.

And now you know that whatever document you followed to install VirtualBox into Kali actually gave you an incomplete result: a VirtualBox installation that cannot be updated using standard tools, and in fact causes errors when you're trying to update the rest of the system. Instead of being an advanced penetration test specialist, you will soon be a vulnerable user whose system is not up-to-date with patches.

If you understand what you are doing when installing VirtualBox on Kali, you should now know how to fix the repository URL to pick a VirtualBox release that matches what you actually installed onto your Kali (i.e. the version intended for the Debian/Ubuntu release that was used as groundwork for your version of Kali).

But Kali is designed for penetration testing. That means it is not intended as a long-term everyday OS: it's designed to run from USB, but you can install it on your pentesting tool laptop if you need to.

When a penetration test for a particular company is complete, you generally wipe the tool laptops' disks and USB sticks to the company's satisfaction, or you might even turn them over to the company you did the test for, to prove that you aren't taking any of the company's data with you when you leave. Then you prepare your tools again for the next test assignment.

In a word, Kali is designed to be task-oriented and disposable. The design longevity of a particular Kali installation is a few weeks or months at most. The distribution is not designed with long-term stability in mind. It may work just fine for a while... until some day it runs into some problem, possibly because of a particular combination of updates.

This is why trying to use Kali as an everyday general-purpose operating system tends to get professionals irritable. If you are a really knowledgeable in all aspects of Linux, you might choose to do it anyway and solve any problems you encounter as you go, but don't say we didn't warn you.

Nevertheless you could try these steps: 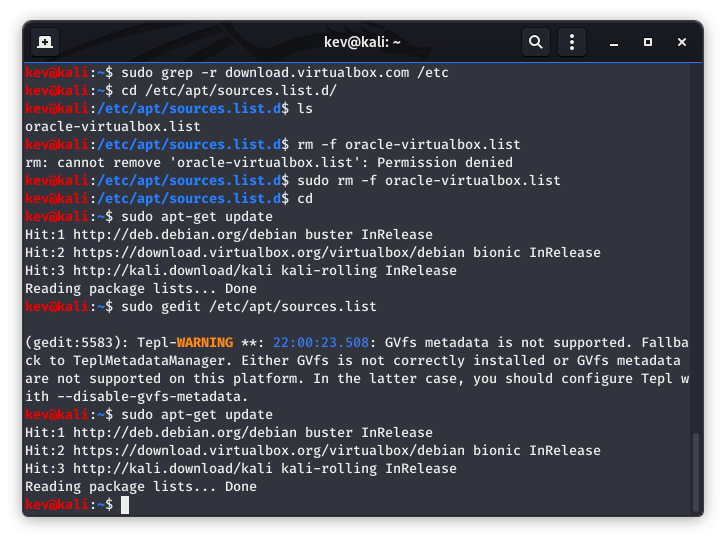 Not the answer you're looking for? Browse other questions tagged apt kali-linux or ask your own question.

-5
What should be in the sources.list for Kali Rolling Linux?
0
apt-get update problem

2
`apt update` failed on Debian Linux
8
Debian 9, APT, and "GPG error: ... InRelease: The following signatures were invalid:"
13
How to install a functional ARM cross-GCC toolchain on Ubuntu 18.04 (Bionic Beaver)
0
When i try to do apt update with repos https://ftp.ustclug.org/~zsj/anbox stretch Release it shows an error:its has no release file
0
hash sum mismatch on apt-get update