Have one resource configured. drbd servicve is not enabled to start at boot time. I reboot the two nodes. One the first node I run systemctl start drbd and get

"DRBD's startup script waits for the peer node(s) to appear.

On second now when I run systemctl start drbd I get:

When I run drbdadm up resource_name on both nodes with drbd service disable and not started I get the two nodes in Secondary/UpToDate state which is good. 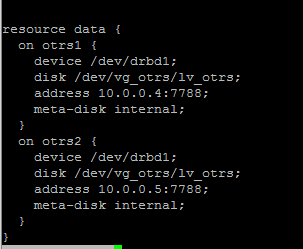 All resource are started on otrs1. It has the Primary role bot shows connecting for the remote node, and on the remote node I don't see the other node at all.

When I run pcs cluster stop --all and next run drbdadm up data on both nodes all looks good.

Now when I mount /dev/drbd1 /opt/otrs on one of the nodes it gets auto promoted to the primary role.

Now when I umount and bring the reource down on both nodes and re-run drbdadm status I get obviously No currently configured DRBD found.

Now, exactly the same happens when I run systemctl start drbd on both. On first node the output appears to hand but I guess it waits for the other node to start its services as well, right ?

After a reboot, the cluster and resources start on node 1 but after putting it into standby mode, resources are not moved: 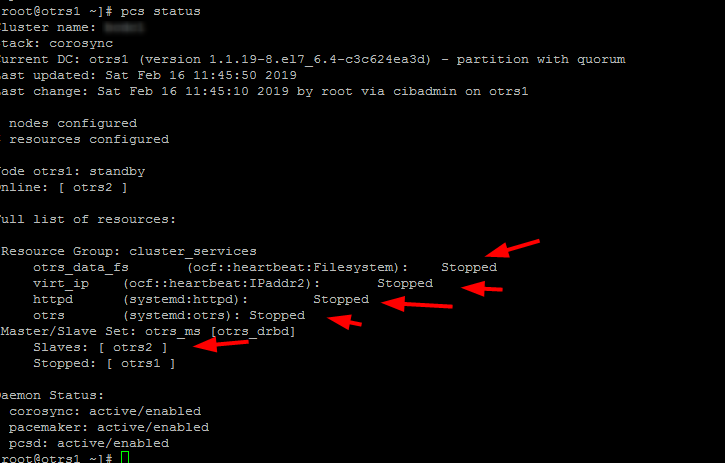 And here's what I see journalctl -xe

If you're using Pacemaker, which you are, then you should disable DRBD in systemd, allowing Pacemaker to have full control of starting/stopping DRBD.

DRBD should load it's transport modules when it brings up it's connections, and drbdadm up <res> should load the DRBD kernel module if it isn't already loaded.

Not the answer you're looking for? Browse other questions tagged drbd or ask your own question.