tmux status-bar corrupted after catting a binary file, how to reset?

I accidentally screw up my tmux terminal after cating a binary file. Now my tmux is messed up. Detaching and re-attaching doesn't help, nor does a redraw (C-b r). Running reset only redraws the active pane, not the rest. Running ssty sane either in- or outside tmux doesn't help either. 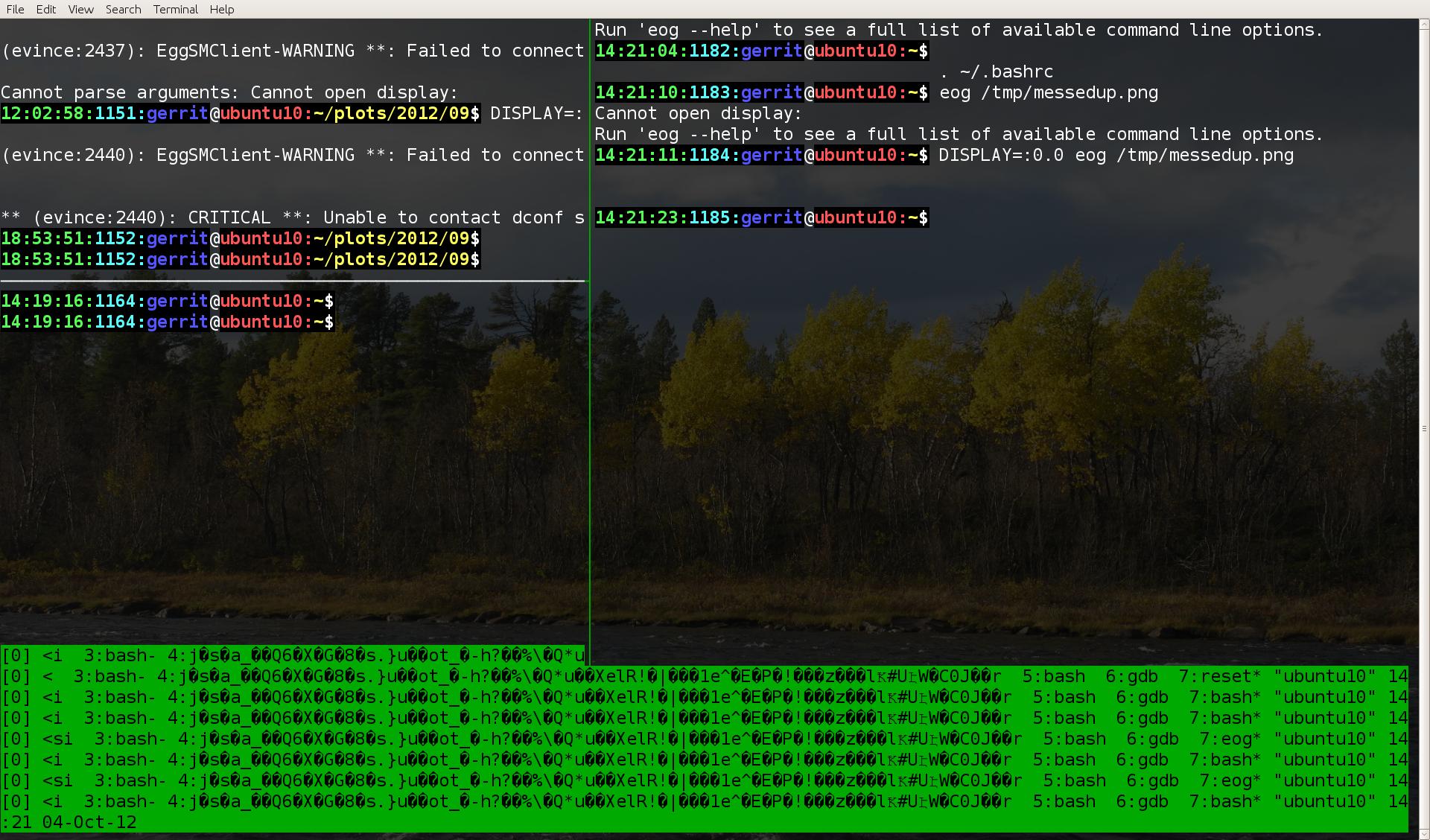 Within each pane, I have normal feedback from what I type (the initial call of reset immediately after the terminal got messed up solved this), but I can't seem to fix the status-bar.

In xterm, the status-bar does remain within one line, but it remains corrupted as pictured.

This bug report from 2008 seems to describe the same issue, but it was marked as fixed. I don't know in what version it was fixed, but tmux 1.5 ought to include a fix from 2008.

(Thats a comma in the middle)

You need two command sequences to cleanup the mess:

First, run this in the garbled window (this works even when you are in ssh):

Then run this on the computer which runs tmux (it works inside and outside of tmux):

The following command affects all tmux instances, which may change the left status of more than the current window. If you do not need that feature, leave it away.

This was assembled to address all the bits found in other answers and comments. There currently seems only a minor bit left with the second command. (See in the "missing bit" below).

To understand how this works, let us first kill the status line of tmux and the tty. Afterwards we correct it again, using a method which should be always available (unlike command reset).

How to make a tmux terminal (assumes UTF-8) unusable

Warning: After running above command, the shell looks blind and deaf and seems only to talk bullshit in some unknown alien language. See below on how to repair this.

This might be the combination you can see on the terminal after some interactive command crashed and dropped back into the shell. (With /bin/cat you cannot provoke stty -echo IMHO, but interactive commands like vim usually set this.)

Now clean up this mess

Note: If you use copy and paste (you probably need to hold down Shift while pasting), you probably cannot see your paste if you have used the above command to mess up with your tty. Hence, just blindly press the Enter key after pasting this.

But, as noted in the comments below, you can activate a similar feature of tmux as a replacement with following tmux setting:

PS: Thanks to all who helped to assemble this solution.

The specific problem you are seeing has to do with the name/title of window 4. A combination of being too long (obviously) and containing strange characters which cause tmux to measure it as being shorter (so it fails to properly limit the status bar to the width of the screen) I am not sure how to reset it (on mine it tracks the name of the foreground process), you may have to close the window.

fixed this for me when something other than the window name was corrupted and I couldn't be bothered to figure out what it was.

tmux might only constitute part of the problem. You may have to invoke stty sane at the command line. This resets the in-kernel TTY drivers to some set of default values that usually let you proceed. If the TTY drivers are messed up enough, you may have to type stty sane "blind", that is, without on-screen feedback.

Try to reload your config file?

to fix the issue for me:

I just killed the issue pane and window, and created a new window and pane.

3
Tmux status bar question
1
Combining local and remote terminal multiplexing
4
tmux ignores the configuration files
1
Why tmux is changing my screen brightness?
0
cating a binary in a tmux pane crashes the whole window
14
tmux doesn't resize with terminal window
1
Shell command output not being displayed in tmux status
30
tmux not colorizing PS1 prompt
1
How to copy/paste text using the mouse from one tmux instance in one terminal emulator to another tmux instance in a different terminal emulator?