Ok, I realise that I risk a religious war asking a question about text editors, but here goes.

Surely this isn't a big ask in this day and age?

Micro is a terminal-based text editor that aims to be easy to use and intuitive, while also taking advantage of the full capabilities of modern terminals. It comes as one single, batteries-included, static binary with no dependencies, and you can download and use it right now.

As the name indicates, micro aims to be somewhat of a successor to the nano editor by being easy to install and use in a pinch, but micro also aims to be enjoyable to use full time, whether you work in the terminal because you prefer it (like me), or because you need to (over ssh).

You need a terminal emulator that properly supports the shift key. Terminator works fine out of the box. Some Android-based terminals do not support shift-selection, but JuiceSSH (most popular in Google Play) works, though I haven't extensively tested it yet.

I have tried all of the above solutions (except the ones that are obviously stupid, like emacs or vi configurations).

The best overall is tilde. Truly made to order to answer the original question posed by Greg Woods. It should be added to all the standard linux repositories.

As a long time nano user, who found his way here looking for something equally simple with a real undo/redo buffer and standard GUI editor key bindings, I heartily recommend the Sanos editor. It is tiny and does just what the original query demands. Its sole defect is there is no mouse support for placing the cursor. It is my new favorite minimal editor, and nano is going into the dustbin. You do have to compile it, but it is a trivial program to compile - a single C language source file. I compiled it to "sane" for "sanos editor" (sanos is actually a mini-os).

And now, to reiterate the question, which most replies and votes seem to ignore: the request is for a dead simple basic editor that just works and uses the standard GUI bindings (which, by the way, do not belong to Windows).

The two I recommend, and fte, are the only ones that fill the bill, and fte is too quirky in an xterm.

You can easily customize nano to fit your requirements, especially regarding your desired keyboard shortcuts. To do so, have a look at the bind parameter which you can set in your local ~/.nanorc file. Of course, you can also download ready-made config files (see below).

You can bind key combinations modeled on Ctrl+ with a preceding ^ and Alt+ with M- ("Meta"). Unfortunately, there seems to be no way to bind combinations containing the Shift key. The nano defaults to skip wordwise are Ctrl+Space and Meta+Space. And as if that wasn't enough, you can't bind arrow keys neither. But maybe you can live with these drawbacks.

Because take a look at the bright side: As a matter of fact, there is a package on github, mostly containing improved syntax highlighting, but also coming with almost all of your desired keybindings. Install it by calling make, but be aware that your current ~/.nanorc will be overwritten during the process.

I think you should give it a try, even though that Shift+Arrow selecting seems to be one of your highest priorities. In nano, you would use Ctrl+A to initiate selection mode, so you don't even have to keep Shift pushed down all the time! And you can always use the Ctrl+Shift+X etc. shortcuts that your terminal provides. As you might have recognized, I am quite happy with nano, possibly partly due to being a former Windows user.

Edit: Here's a screenshot showing some of the pertinent key bindings in the bottom help bar. 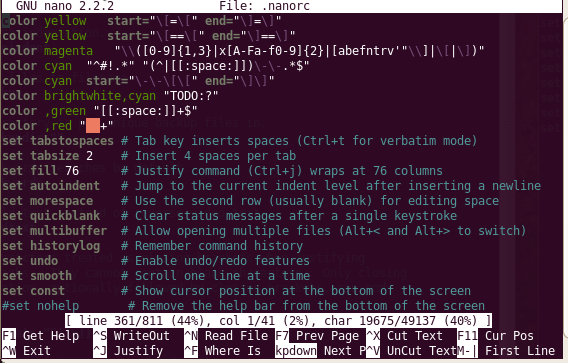 joe is, IMO, the best of the editors-that-aren't-vi. It's a decent full-featured editor in its own right, rather than a stripped down featureless minimal editor like nano.

I'm too much of a vi user to use it myself, but I frequently recommend it to people who don't like or want to learn a modal editor like vi, with good results.

Here's the description in the debian package:

Joe, or Joe's Own Editor, has the feel of most PC text editors: the key sequences are reminiscent of WordStar and Turbo C editors, but the feature set is much larger than of those. Joe has all of the features a Unix user should expect: full use of termcap/terminfo, complete VI-style Unix integration, a powerful configuration file, and regular expression search system. It also has six help reference cards which are always available, and an intuitive, simple, and well thought-out user interface.

Joe has a great screen update optimization algorithm, multiple windows (through/between which you can scroll) and lacks the confusing notion of named buffers. It has command history, TAB expansion in file selection menus, undo and redo functions, (un)indenting and paragraph formatting, filtering highlighted blocks through any external Unix command, editing a pipe into or out of a command, and block move, copy, delete or filter.

Through simple QEdit-style configuration files, Joe can be set up to emulate editors such as Pico and Emacs, along with a complete imitation of WordStar, and a restricted mode version (lets you edit only the files specified on the command line). Joe also has a deferred screen update to handle typeahead, and it ensures that deferral is not bypassed by tty buffering. It's usable even at 2400 baud, and it will work on any kind of sane terminal.

It is, AFAIK, packaged for all distros, and source is available at http://joe-editor.sourceforge.net/ - the debianised source should compile on Raspian if there isn't already a binary package.

Try the FTE Text Editor. There are multiple versions available; the one you want is probably sfte which is in Debian's fte-terminal package. 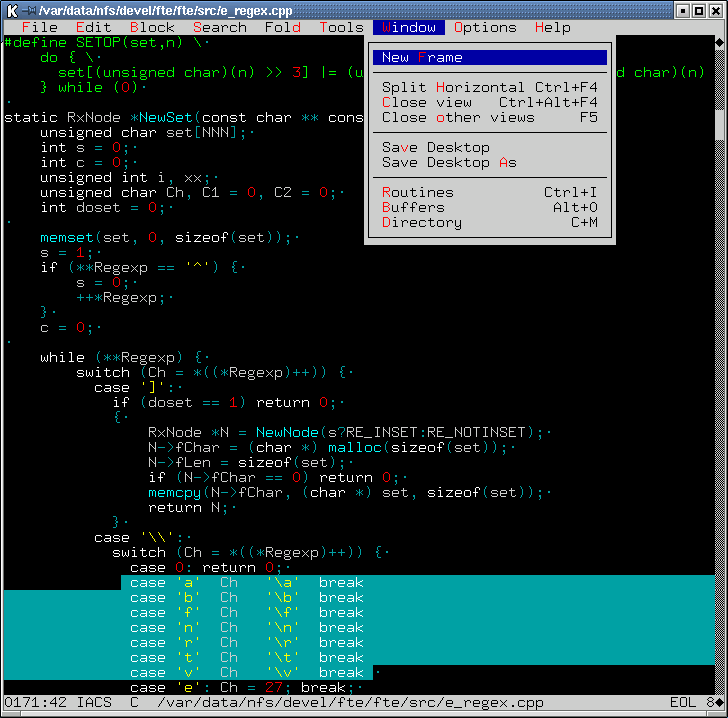 Cream is a configuration of vim that is modeless and which uses all the keyboard shortcuts like Ctrl+X, Ctrl+V that you might expect.

Unlike Vim it isn't alien to people used to Windows GUI applications like Notepad. If you can use Notepad you can use Cream.

Emacs comes with a CUA bindings mode. Add the line

Joe is a small-to-medium text-mode editor with configurable keybindings. There is a set of CUA bindings (not in the standard distribution, I think, so install them in your home directory).

Diakonos also conforms to most of the requirements:

Frustrated by those other console editors? You already know what keys to press in your GUI applications to open, save, copy, cut, paste and undo. Why should your console text editor behave differently? Answer: it shouldn't.

Welcome to Diakonos, the console text editor with a key mapping you practically already know. Easy to use and easy to configure, but potent in the hands of power users.

Debian package exists, I have no information about that requested flavor.

This is exactly why we at e10labs wrote CTE, you'll love this. https://cte.e10labs.com

Cᴛᴇ is a text editor for the Unix terminal, like nano and vi, but is better as there is no learning curve. It behaves like a modern application with mouse, menus and dialog boxes. This makes it like Linux Gedit, Kate, a web browser, Microsoft Notepad or Word. For example: To find some text one presses Ctrl-F and a dialog box appears.

Cᴛᴇ is distributed as a single binary, ready to run, with no dependencies, or a .deb or .rpm with the same. 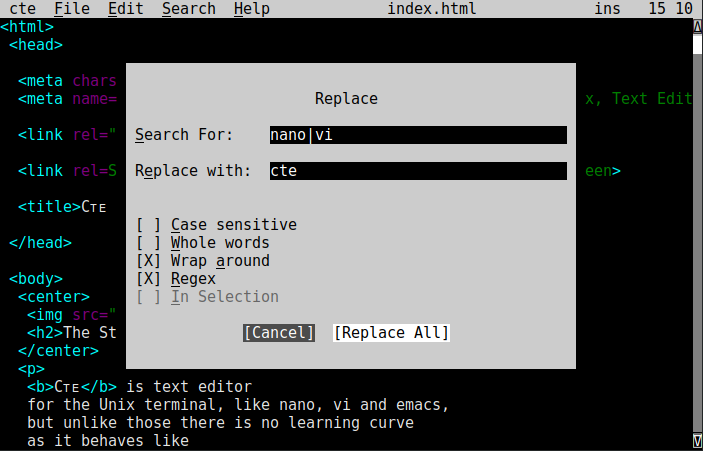 Have a look at the Sanos editor:

Only a 28k binary can do what all those other editors try to -- and fail.

It does exactly what the OP asked for:

You can also have several open files simultaneously, and "pipe" commands into it. For example, press Ctrl-P and at the prompt enter:

and it will insert yourfile at the position of the cursor. This way the full power of the bash commands are at your disposal ( use grep to get only specific parts of the file inserted ).

The following has been tested using nano from a terminal in MS-Windows.
It will get your nano one step closer supporting the "universal" shortcuts for copy/cut/paste etc. (at least in the Windows world).
Add these lines to the nano configfile /etc/nanorc

If you have issues selecting text in nano with shift+arrow-keys then be aware this doesn't seem to be related to nano but your terminal program.
In my case it didn't work in PuTTY, but it did work in Kitty (a fork of PuTTY, Windows-version / Linux-version).

mcedit is the best editor. At least will send you to 90s with the UI. Enables SHIFT-arrows selection on some terminals, very Norton Commander interface, Fx keys, CtrlO to see the shell. Remembers the position when coming back, recognizes highlighting even for unlikely files (without extension). Unfortunately its clipboard is internal, which is highly confusing. That mean you will end up in three way selection: CtrlC + CtrlIns + CtrlShiftIns (terminals own copy).

The answer is kitty+tilde (KiTTY is a fork from version 0.66 of PuTTY) guys ! My whole life has been a lie : D

Le is another solution. It is like Norton Commander ( of Midnight Commander fame ) but perhaps more intuitive.

or download the source and build ( I've tested it on Debian sid ):

I have tried Nano, Joe, Pico etc. While they are easier than Emacs or Vi[m], they all have weird, idiosyncratic UIs unlike any other program since the 1980s.

But there are modern, CUA-compliant editors for Linux out there!

Someone recommended FTE. It is long-unmaintained, but there is a current fork called eFTE: http://sourceforge.net/projects/efte/

It's pretty good; for instance, it is able to trap the Alt key for menu access even when running in an X terminal-emulator window.

There is another one that I rather like as well, called Tilde, which is currently maintained and has recent packages available. http://os.ghalkes.nl/tilde/

I use it because I don't have time to open the etc/nanorc.

Not the answer you're looking for? Browse other questions tagged command-line software-rec editors or ask your own question.