Not able to build dual boot in separated hard drives

I am trying to install a Linux distro in dual boot with an already installed Windows OS, in separated hard drives (each one in a different SSD). Anyway, I am having some troubles with it, which I am not able to fix. The problem comes with the booting system.

At this moment, I already installed in the new SSD drive the following distros: Elementary OS, Deepin OS, Solus OS, Ubuntu. Anyway, when I access the BIOS, it does not detect both drives. If I want to run Linux, I need to manually disconnect the SATA wire of the other SSD, so that only one SSD is connected. After that, if I reconnect the wire to the disconnected SSD, the PC will always boot Linux, so that if I want to run Windows, I need to disconnect the SSD containing Linux, and after that, Windows will be always launched. Both Linux and Windows detect the two SSD drives (Linux from terminal, Windows from disk management).

Moreover, when I installed Solus in the SSD, the BIOS was detecting both systems, so that I could launch any of the OS just by changing the boot priority from the BIOS. That just happened with Solus.

Which could be the solution so that I can have a booting selection when turning on the PC? This is how the BIOS configuration for Boot priority looks like 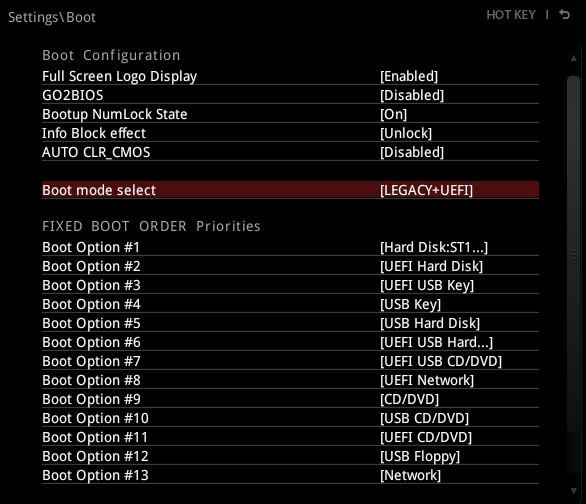 I suspect what's happening is that your BIOS is choosing just one EFI boot partition to read. Each operating system should have its own entries in this special partition. This should be a small partion < 600mb?

Your BIOS will only be able to boot from one form (usually). So firstly make sure your linuix is all setup to use EFI boot NOT legacy. It might be bad news if linux is installed using legacy as you might need to re-install.

The easiest thing to try is just to copy files between your two UEFI partitions. The windows files will be in a completely different directory to the linux files so they should hapily co-exist on the same partition. From memory windows doesn't make accessing this easy, so maybe try under linux.

Again from memory, under linux your current EFI partition is usually mounted to /boot/efi. So you would need to mount your windows EFI partition and copy from /boot/efi/.

Then boot from your windows disk.

Not the answer you're looking for? Browse other questions tagged dual-boot bios or ask your own question.