How do I search a file using "less" for a value with a decimal point?

So I less my file:

Then I try to search for a value:

I've since learned less uses regex, so . is a wildcard. I've tried to escape it with no success.

You can turn off regex mode by hitting Ctrl+R before typing the pattern:

will do the trick (inside less).

Regex to search for numbers (with or without a decimal)

This regex works in less but also in other cases where the same regex syntax is used.

You start the search engine with /, so if you want to find decimal numbers, but avoid text with dots (like file.txt) or periods between sentences, I think the following string is rather good, 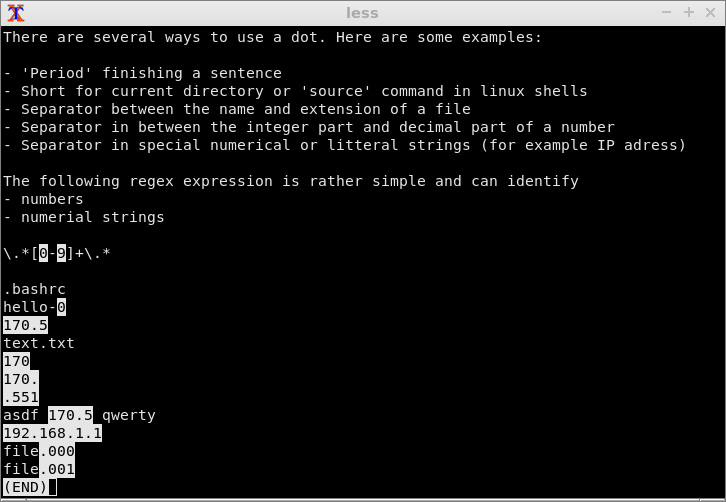 Regex to search for numbers with a decimal part

This regex works in less but also in other cases where the same regex syntax is used.

The corresponding search command is

It will also find numerical strings (for example IP address), in general digits after a dot (including digits before the dot, if any).

Not the answer you're looking for? Browse other questions tagged regular-expression less or ask your own question.

4
How to follow and seek in a file being piped through a filter, in less
11
Search in less with wrap-around at EOF
6
Search replace in XML file with sed or awk
7
How to indicate start of line in less search of man pages?
4
How to pass a search pattern starting with $ to less on the command line
25
Where is less search pattern reference?
1
How to search for a pattern using grep?
3
Using 'less' to leave text on screen for small files
5
How do I exit less when reading from stdin when it is called with a single minus argument: "less -"