Debian mdadm: No devices listed in conf file were found

My Debian sid machine had been booting kernel 4.13 from a raid array for several months without issue. 2 days ago I upgraded the platform and now booting fails like this: 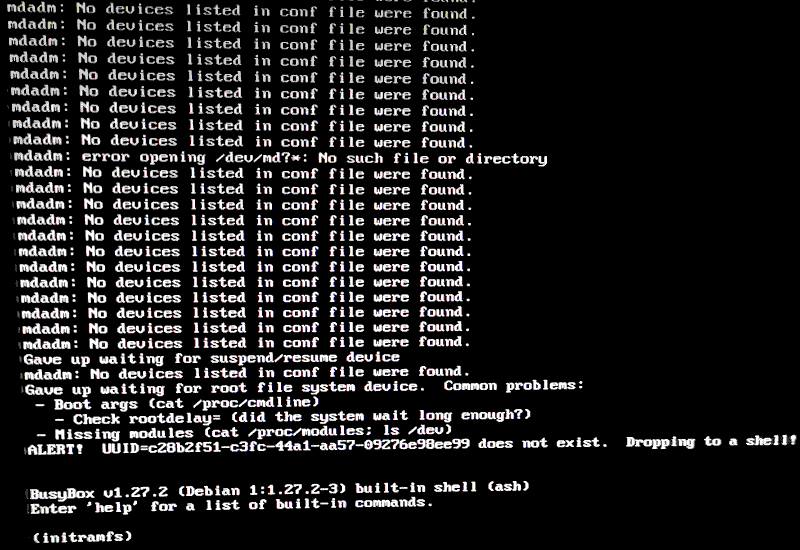 Additionally, the initramfs prompt does not accept any input, so I cannot investigate from there.

These things I tried so far:

Do you have any idea how to fix this?

*) Which I cannot use because compiling the NVIDIA module fails because of unknown rela relocation and I don't want to downgrade binutils (yet).

There is a new bug affecting at least Debian sid, testing (so near to a freeze...) (and also Archlinux) related to systemd 240, more specifically to its udev component, possibly udevadm: udev 240 Makes System Unbootable; rootfs Not Found

This bug leads to no devices being enumerated in /dev by udev: no disk (perhaps only no /dev/disk/, so no UUID rather than no /dev/sda?). Probably same with no USB enumeration so no keyboard unless it's a PS/2 port, etc. can't really tell.

It's not related to the kernel, but upgrading kernel as well as boot components triggers the rebuild of the initramfs boot part: make a backup of the still working 4.9 kernel's initramfs file, it can still be lost later.

Reverting to udev (and libudev1) 239-15 is said to fix the issue for now. Be sure initramfs is rebuilt for all kernels not just the current one.

UPDATE: udev 240-4 in sid includes the upstream fix for this issue:

Not the answer you're looking for? Browse other questions tagged debian boot raid mdadm or ask your own question.

4
apt-get upgrade to a certain state
0
Arch: root partition not found at boot