Gnu sed, will the p command appends a newline when printing?

I'm new to sed and I created below sed's workflow based on my understanding (correct me if you find anything wrong). 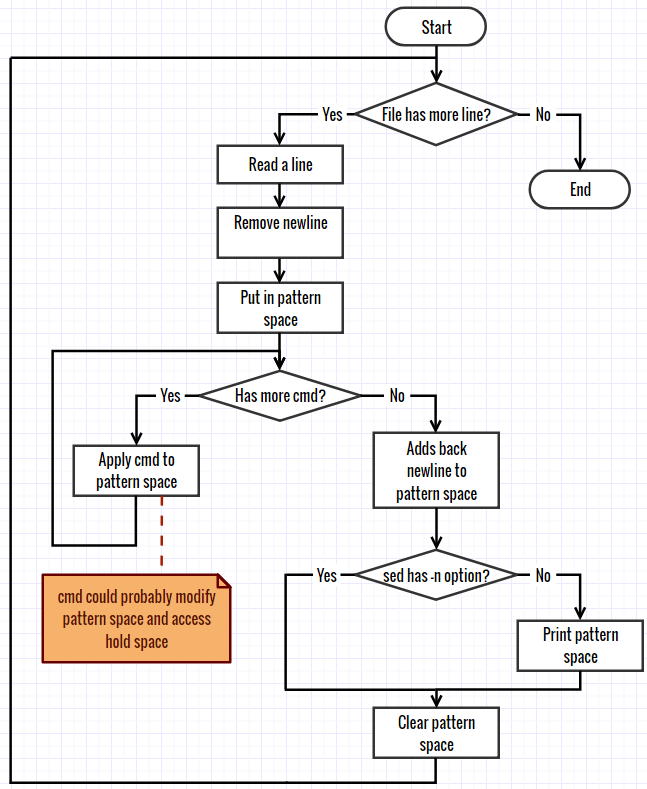 So it seems the default auto printing of the pattern space will always include a newline at the end. My question is, will p includes a newline, too? I have below examples.

Here the newline at the end of each number is added by sed itself (see the diagram "adds back newline to pattern space"). So it seems p will not append a newline. However, see below example.

Here x exchange pattern space with hold space, which will result in an empty pattern space. Now p applies to the pattern space (nothing in it) should print nothing. But based on the result, it seems here p prints a newline. To me it seems this is inconsistent behavior. Can anyone explain?

To answer your main question:

As far as I can tell, sed's p flag and its auto-print feature implement the same logic to output the pattern space: if the trailing <newline> character was removed, they add it back; otherwise they don't.

In both cases there is no <newline> character (0a) in the output for the input lines that don't have one.

"Adds back newline to pattern space" is probably inaccurate because the <newline> character is not put in the pattern space1. Also, that step is not related to the -n option - but this does not make the diagram wrong; rather, it should probably be merged into "Print pattern space".
Still, I agree with you about the documentation's lack of clarity.

1 The sentence you quote in your own answer, "the contents of pattern space are printed out to the output stream, adding back the trailing newline if it was removed", means that the <newline> is appended to the stream, not to pattern space. Of course, since pattern space is cleared in a short while, this is a really minor point

About your tests involving the x flag:

Examples - these commands have the same output:

(I gave only a really brief look at sed's code, so this might well be not accurate).

About lines (clarification started with comments to your answer):

It goes without saying that a line without a terminating <newline> character is a problematic concept. Quoting POSIX:

3.403 Text File
A file that contains characters organized into zero or more lines. ...

Finally, POSIX on sed (bold mine):

DESCRIPTION
The sed utility is a stream editor that shall read one or more text files, make editing changes according to a script of editing commands, and write the results to standard output. ...

GNU sed, though, seems to be less strict when defining its input:

sed is a stream editor. A stream editor is used to perform basic text transformations on an input stream (a file or input from a pipeline). ...

So, relating to my first sentence, we should take into account that, for GNU sed, what is read into the pattern space doesn't necessarily have to be a well formed line of text.

I edited my answer to only include an updated diagram based on fra-san's answer. The sole purpose is for new sed users to reference. 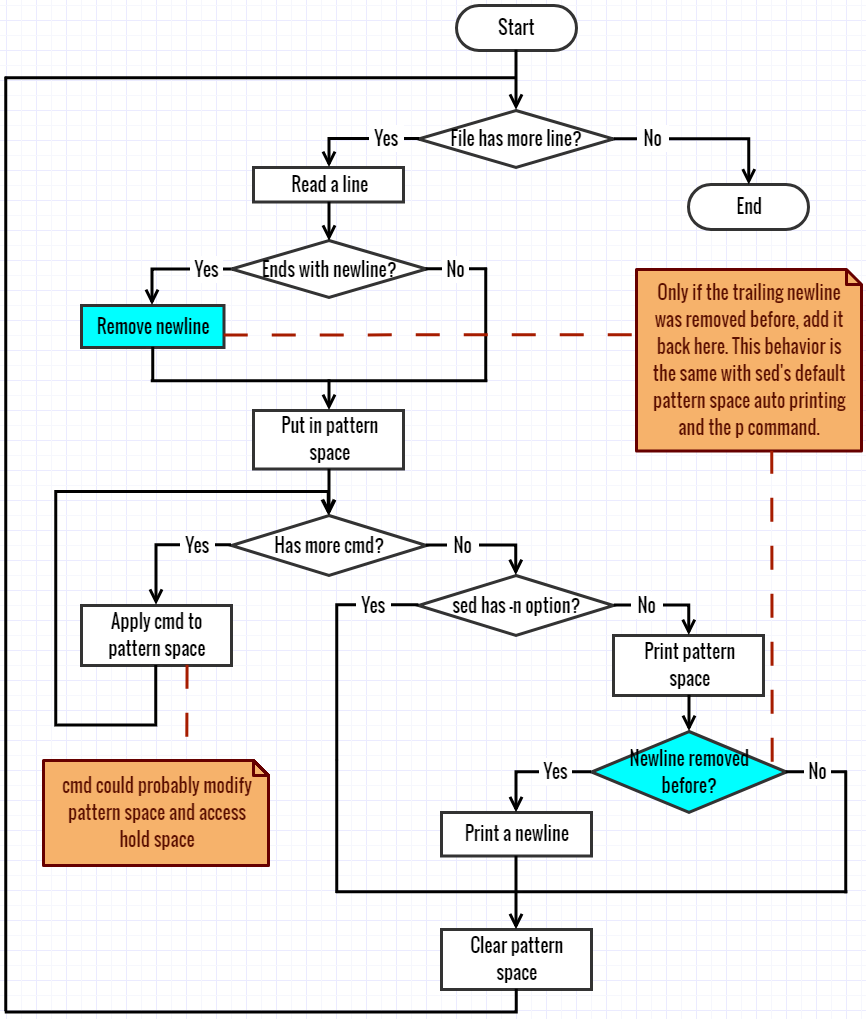 In GNU sed: The command p will add a trailing newline only if one was in the source text (one was removed from the input when placed in the pattern space) but also add a leading new line if additional text is printed to the same stream.

A trailing newline could be missing on the input only on the last line.

Only print the last line, which will have a new line only if the source file already had a newline on that last line:

(1) Actually, if 'sed' prints a line without the terminating newline, it will nevertheless print the missing newline as soon as more text is sent to the same output stream, which gives the "least expected surprise" even though it does not make commands like 'sed -n p' exactly identical to 'cat'.

Some other sed versions might add a trailing newline and/or emit a warning.

Not the answer you're looking for? Browse other questions tagged sed or ask your own question.

18
How do I stop sed from adding extra newline characters
2
Can sed produce output in the form of text file(s) all by itself as long as the input came from STDIN?

33
Can sed remove 'double' newline characters?
0
Prevent sed from printing empty stuff
1
What is wrong with the escaped newline in this sed command?
2
Printing the nth range with sed
0
sed - preserve newline when writing to new file
2
How to use the a and i command in Gnu sed to add a newline character using \n?
0
Sed ignore newline
0
GNU sed --posix and newline character in replacement string
2
Will `sed -n` only show output when `p` is used?
0
sed printing titles