Sort -u Function Command Not Working

As you can see in the picture attached screen shot

After I used the sort command to sort a VERY large wordlist file I then split them up using the Split command. From there I confirmed that the listed words are in a-z order.

I then ran the sort -u command and noticed that it was not removing unique words. (It was removing some as I could see the files were a little smaller, but not all.)

What am I doing wrong?

Overall goal: my over all goal is to take all my wordlists and put them into one large file (25gig), then sort and remove any unique words (cutting this by 40% or so) and then split up the files into manageable sizes. No Windows programs or Linux commands worked.

sort -u removes unique lines. So, the a potential problem is that these three lines are not the same, and sort -u will leave all of them:

No matter how closely you look, its hard to notice why. That is, unless you take a hex dump, with xxd for example:

0x0a is newline, if you're not familiar with hex dumps. So the three "foo"s are:

You've probably got something similar going on. You need to use a hex editor, or a text editor set to show invisible characters. For example, here is what it looks like in gvim with :set list. I've just typed in the ga command to see what the character under the cursor is, revealing that its U+2002. You can also see how the end of line ($) isn't where you expect on the two with spaces after them: 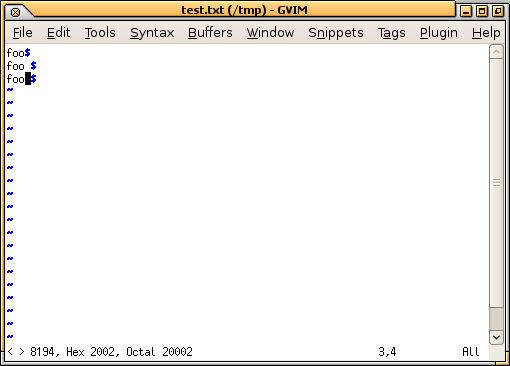 Not the answer you're looking for? Browse other questions tagged text-processing sort or ask your own question.

4
Sort command not working as expected
5
sort not working for similar entries
3
Sort unix alphabetically then numerically, not working as I intended
3
Sort by filename with du command
0
What's the best way to sort?
0
Sort function doesn't work
6
sort command adds/removes data at will
3
Sort command - by month not working?
4
Sort and remove duplicates in place and recursively