I want to check out Nitrux which you can deploy using znx (how to here).

znx does not seem to open correctly in Fedora, which is why I would like to deploy it using the terminal. The how-to says that I should install it on a partition that has at least 4 GB.

I have one big free partition on my computer which has about 200 GB. Do you know if the entire partition will be "blocked" by Nitrux, if I will deploy it on that partition? Or will znx assign it 4 GB of that partition and let me use the rest?

No, the entire partition will not be used by Nitrux:

The first thing you have to do in order to use znx is to initialize the device. znx will wipe the device and create a new GPT partition table on it, with two partitions. One of those partitions stores the bootloader data, while the other stores user data (including the images). Those partitions are then formatted with the FAT32 and the BTRFS filesystems respectively. After that, znx creates some directories on both partitions, as well as copying some files to the boot partition. Once those things are done, the device is considered initialized.

The 4G recommendation by Nitrux is not for the partition but for the entire device; This is very important. znx essentially takes over an entire disk, as described in the first quotation above. Maybe you can get it to work with with your 200GB partition, but that's not how the znx documentation describes it.

You can read the nitty-gritty in the znx Wiki.

Note: The information below is exclusively for the ISO images that include or support znx. The following information does not pertain to the ISO files that use a traditional installer such as Calamares.

I want to check out Nitrux, which you can deploy using znx (how to here).

You can go about this in different ways. You can download the ISO, flash it to a USB (don't burn it to optical media), boot the Live USB, and use znx to deploy it to an internal or external device.

You can also use another distribution and only download znx to deploy it to an internal or external device.

Whether you choose to do one or the other, you can choose to initialize a device or use an existing partition.

I'd emphasize that you read both the Compendium and the FAQ to understand what znx does before using it.

Since you choose to use a different distribution, in your case, Fedora 20, you need to download the znx AppImage file; this is the only extra step you will do.

Because it's an AppImage, there's no installation involved (i.e., using a package manager). There's also no "installation" involved with Nitrux either (the correct term in this context is deployment, this is explained in the documentation).

After downloading the AppImage, you have to make it executable; then, you can execute the AppImage in the Terminal using sudo ./znx (assuming you're in the same path as the file).

Optionally, you can move it to /usr/bin/ so you don't have to type ./ to execute the AppImage, and you can use it anywhere. 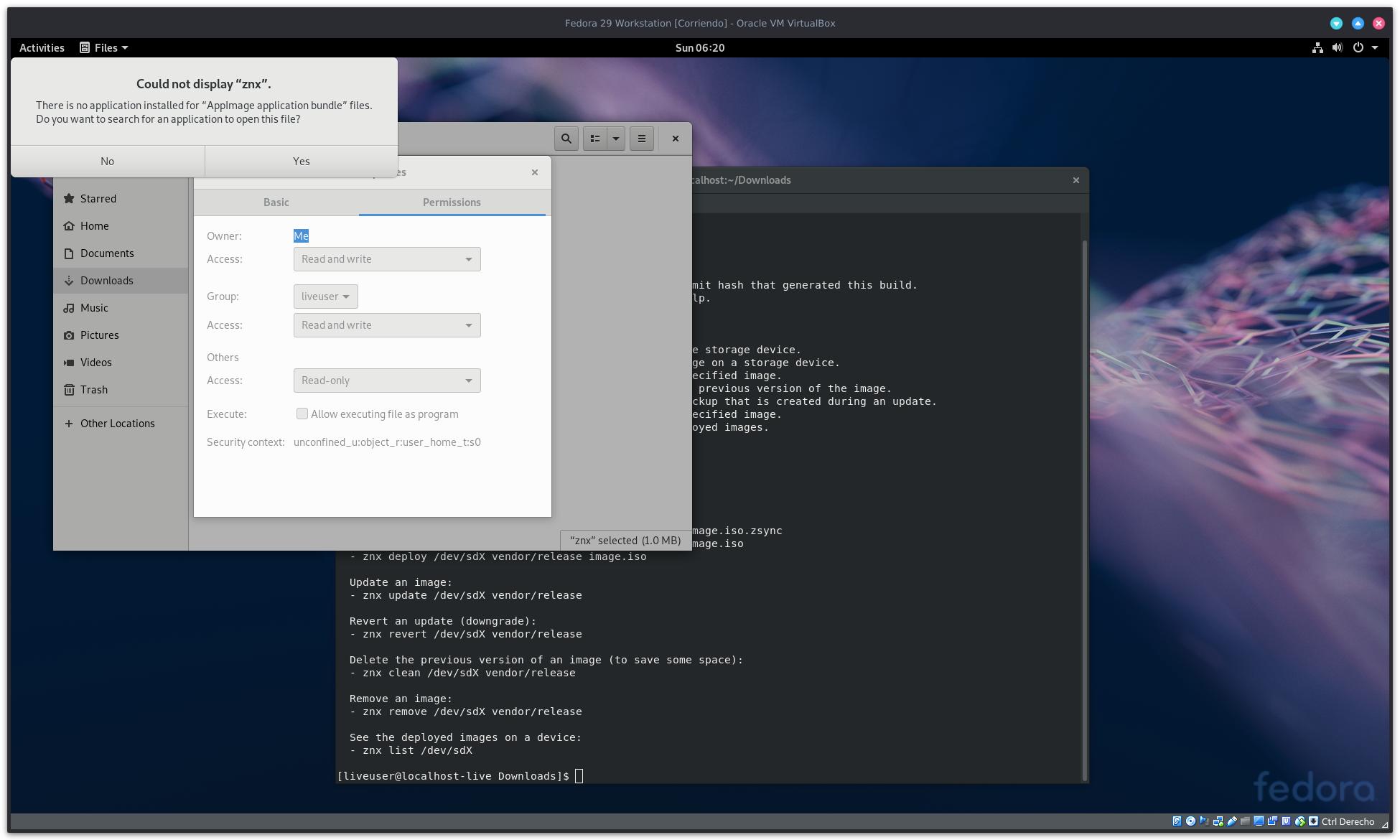 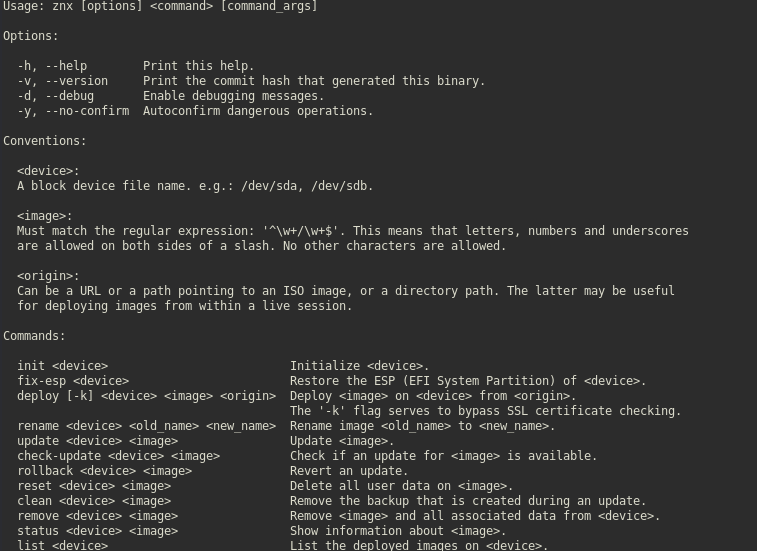 You need to type the commands for znx in the correct order, like the help shows, and like the Compendium shows.

Note: NVME devices are named /dev/nvmeXnY, where X is the port and Y is the device.

First, you initialize the device. This will wipe the device. The syntax of the command for this task, in this case, is znx [command] [path_to_target_device].

Then, proceed to deploy Nitrux. The syntax of the command for this task, in this case, is znx [command] [path_to_target_device] [deployment_name] [path_to_file]. znx supports both local and remote files. We will use a remote file.

And that's it. Reboot and select the second drive to boot into Nitrux.

znx does not seem to open correctly in Fedora, which is why I would like to deploy it using the terminal. The how-to says that I should install it on a partition that has at least 4 GB.

znx is a command-line AppImage program. znx-gui was a temporary user interface that we made using KDialog for znx for users that don't want to touch the Terminal.

We strongly recommend that you use znx since znx-gui is deprecated.

The commands in the Compendium are examples to guide users on how to use znx to deploy Nitrux. The preferred option to deploy the ISO file is to do it to a target device, i.e. /dev/sdX or /dev/nvmeXnY and not to a partition.

The 4GB that you mention is an example of the command sudo fdisk -l. It's not a recommendation; that's why it's in a different color too.

I have one big free partition on my computer which has about 200 GB. Do you know if the entire partition will be "blocked" by Nitrux if I deploy it on that partition? Or will znx assign it 4 GB of that partition and let me use the rest?

One of the features of znx is that you can deploy multiple operating systems at once without the need to create multiple partitions (i.e., you don't need separate root and home partitions for each distribution). With znx, you only need two partitions, one for the ESP and one for your data, and znx will create both of them automatically when you initialize a device.

It's essential to understand that znx does not work as a traditional Linux installer (an installer extracts the SquashFS file in the ISO to the target storage device, and znx does not do this).

However, answering your question, yes you can use an existing partition to deploy an ISO using znx; this is the preferred method if you don't want to wipe a storage device.

We have explained what znx is and what it does in several articles at our Blog, the FAQ, and the Compendium.

If you or anyone else wants to know how znx works or how Nitrux makes use of znx, I suggest creating more questions.

Not the answer you're looking for? Browse other questions tagged fedora partition deployment or ask your own question.

4
Is the crazy partition layout in Fedora 15 really nessesary?
0
How can I install rpmfusion to then install a video player in Fedora 12?
3
How can I get a new Fedora 19 install to boot on Intel NUC
2
How to recover from a boot hang after deleting old swap?
6
Problems mounting GPT partitioned external HDD
3
What (type of) partition is needed to install Fedora alongside Windows
2
Create logical volume from another LV free space
5
Available space not changing when resizing a partition
1
Can I increase root partition with this current partition
0
Why do Linux split the select partition into /live and /home?