What is the server-client relationship between a terminal emulator, a window manager and a X server processes? 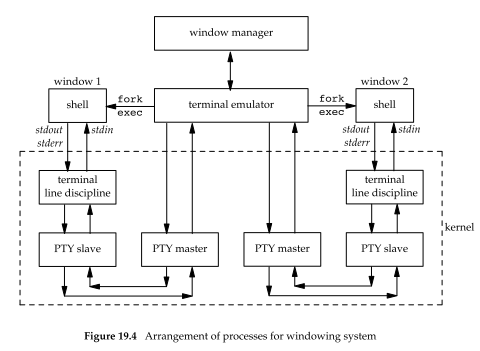 xlsclients is a simple application which is listing the WM_CLIENT_MACHINE and WM_COMMAND properties set on top windows (ie. windows which are children of the root window or have a WM_STATE property).

That's about everything that it does. There's no magic.

For instance, I'm using my own window manager which has opened an InputOnly (invisible) window as child of the root window, to use it for ewmh's wm check. If I set those two properties on it, the expected thing will happen ;-)

But to answer your question:

They're both clients of the X11 server, and they usually communicate by sending client messages with XSendEvent(3) and setting properties on windows. The protocol is described in icccm and ewmh. Notice that a client does not "have" a window; any client can do any operation on any window, including but not limited to setting and getting any property off it.

I don't know what APUE is supposed to mean, and googling turns up nothing useful, but I can explain it for terminal emulators like xterm. While xterm just uses a single shell plus the PTYs (e.g. the left part of the picture), nothing stops terminal emulators from doing this multiple times e.g. in tabbed subwindows, so possibly APUE is such a program.

1) The terminal emulator is just a normal X application, and as such communicates with the X window manager in the same way every other X application does: indirectly via the X server. The details of this are complicated, and involve X properties, X events and other stuff. They don't involve any kind of client-server relationship (because the connection is indirect), or a Unix domain socket.

2) Any X application, including a terminal emulator, is a client of the X server, via a Unix domain socket if they run on the same machine, or via the network if they don't. And yes, xlsclients lists all client applications of the X server it connects to, like the name implies.

An X client is (at least according to my view) anything that opens a connection to an X server, even if it doesn't display a window. So xlsclients is an X client (as long as it runs), as are other commands that query the X server.

Not the answer you're looking for? Browse other questions tagged terminal-emulator netstat lxterminal or ask your own question.

0
Why doesn't glxgears show up in xlsclients?
1
Is wine server a client of X server?
-2
Is a terminal emulator process a server?
-1
Why is X Server a server rather than a library with a set of predefined functions?
0
Is a display manager a client of an X server?