How to inspect decrypted TLS/SSL traffic in Wireshark from program not supporting SSLKEYLOGFILE?

TL;DR: I feel I'm pretty close to doing so by using sslsplit's interface mirroring, but I ran into an issue where the kernel is not replying to ARP requests that sslsplit is sending out on the mirrored interface.

I want to intercept an SSL/TLS connection of a program I'm running in my machine and see the decrypted contents in wireshark. It seems sslsplit's interface mirroring is what I need so I've been trying to set that up.

This command properly sets up the interception without mirroring and simply outputting some info to stdout:

The idea is to run the program whose connection I want to intercept in that network namespace (i.e. ip netns exec sslsplitns $cmd). I found this setup necessary because sslsplit works using the NAT engine, and it seems it can't pickup on packets unless they go through the INPUT chains.

Anyway, to use network mirroring I apparently select the interface I want to mirror to with -I. However, sslsplit says that -I depends on -T which is:

-T addr Mirror connection content as emulated packets to destination address addr on the interface given by -I. Only IPv4 target addresses are currently supported. This option is not available if SSLsplit was built without mirroring support.

EDIT 4: I imagine this means that if I made an HTTPS request to, for example, 1.2.3.4, sslsplit would make an equivalent HTTP request to whatever I provide to this option. Somebody, please correct me if I'm misunderstanding this, because I'm not completely sure how this would work. Would sslsplit really be able to use this provided address as source and destination IP? Would it make sure that no other program would receive these mirrored packets in case they're actually listening? How would this mirroring work if I provided sslsplit with an actual physical link and the IP of another physical computer? Are these mirrored packets actually meant to be received and not merely inspected by a tool like wireshark or tcpdump?

So I made a dummy interface (ip link add dummy0 type dummy), gave it an address and provided that address to sslplit's -T.

Looking through wireshark, in preparation to see the decrypted SSL packets, I see that sslsplit sends ARP requests querying the hardware address of the ip address I gave it. After various attempts, sslsplit ends up dying with the message failed to lookup target ether. I thought, maybe the kernel won't reply because it's the same address it's sending from, so it's too silly to take seriously. So I made another veth link, gave both ends a different address in the same /24 subnet, and provided one of them to sslsplit's -T. It correctly used the other address to ARP query the hardware address of the IP I gave it, but the kernel still wouldn't reply to the ARP request.

I've tried activating all sysctl options relating to ARP, and also rp_filter, basing myself from this answer.

Here is a picture of wireshark with the ARP requests. When those fail I also see SSDP packets, but I don't know what those are, and they seem little relevant: 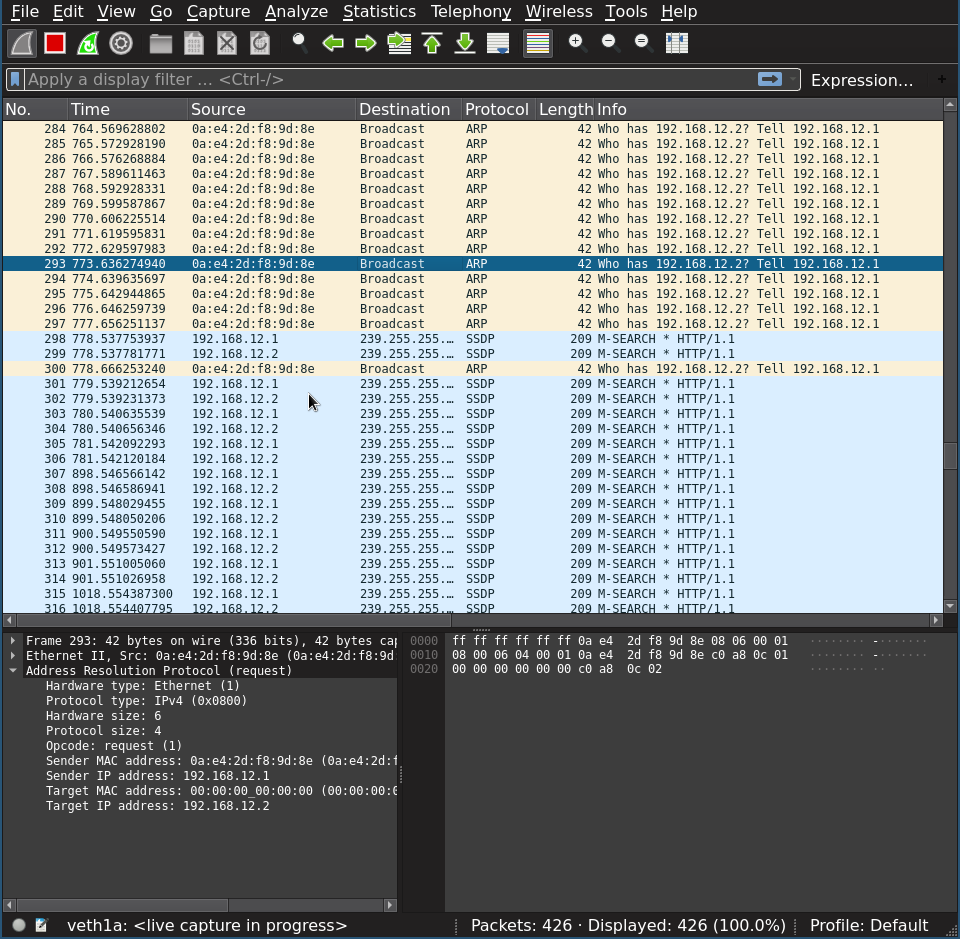 EDIT 3: For the record, here's some of the output from ip link, which shows the ethernet address that the kernel should be replying with:

I cannot solve your problem, but I hope I could provide you with a little help.

As you know, parameters -I and -T are both required for mirroring. Parameter -I specifies an interface on which is intended to be an analyzer (some node capturing mirrored packets) and parameter -T specifies IPv4 address of the target of mirrored data.

If you provide to SSLsplit dummy interface it cannot resolve the destination MAC address. That is the reason why you have got failed to lookup target ether.

Is not better in this case use -X parameter to log traffic into .pcap file and you do not have to solve resolving problems?

Not the answer you're looking for? Browse other questions tagged ssl iproute arp wireshark or ask your own question.

1
How can I debug traffic on a switched network with Wireshark?
0
routing problem - arp
1
wireshark how do I filter for items not in an array?
4
Can not download from an HTTPS site (ssl) with wget?
4
How can I check currently installed and in use versions of SSL and TLS?
9
WARNING: pip is configured with locations that require TLS/SSL, however the ssl module in Python is not available
2
How to share wireguard with namespace?
1
How to use a network interface as read-only?