not able to run vm using VirtualBox on fedora 28 workstation

I have several problems with virtualbox on fedora 28 workstation. Problems are described below:

First at all, I tried to install virtualbox following to this tutorial: https://www.if-not-true-then-false.com/2010/install-virtualbox-with-yum-on-fedora-centos-red-hat-rhel/

I got stuck at step 5: Install VirtualBox Latest Version 5.2

I got error: No match for argument: VirtualBox-5.2 Error: Unable to find a match.

I resolved this problem as described below:

After successful installation I created vm with win10 64bit and tried to run it and then I get this: 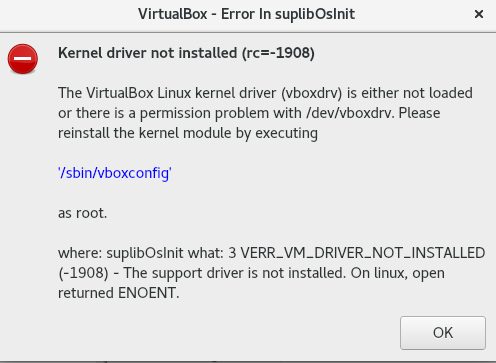 Of course I run /sbin/vboxconfig in terminal as described in modal window but I got error : vboxdrv.sh: failed: modprobe vboxdrv failed. Please use 'dmesg' to find out why.

output from dmesg: (there are more ECPI errors)

After small research I found this article (https://gorka.eguileor.com/vbox-vmware-in-secureboot-linux-2016-update/), which looks like can solve my problem:

So I followed steps

I skipped first command because I already installed all required packages from this tutorial (virtualbox, gcc and kernel-devel)

Then I tried second command :

sudo akmods and get: No akmod packages found, nothing to do. [ OK ]

ERROR: could not insert 'vboxdrv': Operation not permitted

So I couldnt continue....

2.How Could I solve errors produced by commands sudo akmods and sudo modprobe -v vboxdrv to get same result as in tutorial ?

3.I also encoutered to this Failed to synchronize cache for repo 'virtualbox', disabling. What does it mean ? and how could be solved ?

You can't run VirtualBox and KVM at the same time. But your system appears to be starting KVM at boot.

You can then either unload the KVM modules or reboot the system.

At this point you should be able to install the VirtualBox modules and begin using VirtualBox.

But of course, if you are already using KVM, why on earth would you even want VirtualBox?

Not the answer you're looking for? Browse other questions tagged fedora virtualbox or ask your own question.