The terminal i'm using is termite, and it is very good, but i'm having a problem with vim colorschemes and some colors in the terminal itself too when using tmux. It happens as follows: 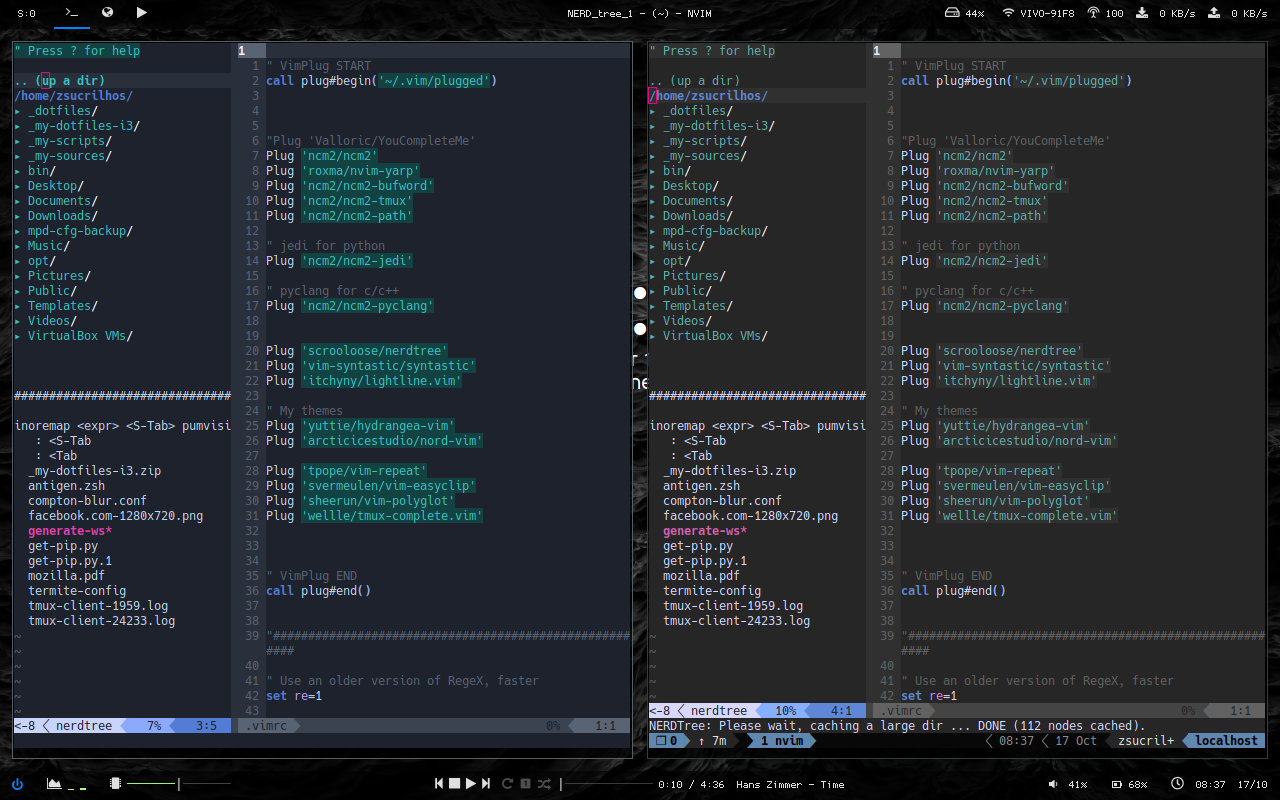 As you can see in the screenshot, when i open nvim or vim with tmux, the case on the left, the colorscheme gets altered, this happens with all colorschemes i tested (about 15 or 20). I observed, that when i execute the command TERM=xterm-256color tmux right after i enter termite, the nvim/vim (i simlinked my .vimrc, so it is the same as init.vim) colorschemes works like a charm! I'm using i3-gaps, so, i decided to set the binding, $mod+Return to open termite that way:

It should have worked, but when i press the keys, the screen only blinks and nothing happens.

For the ones with a similar problem or the same one here it goes: you just need to set the $TERM variable to be the same in your .rc and in .tmux.conf files. To know if something is wrong, i recommend using :checkhealth command inside neovim.

So, if anyone is still interested in finding a fix; for those who still have the same problem: I was able to get it working nicely without doing much.

I had forgotten about this matter and stopped using tmux for a long time until I decided to ask about it on a Linux group on Telegram and a cool lad helped me with the issue. We've come up to this, on the sxhkd config file:

I changed terminal to Allacrity, that's a GPU-based term, faster and more easily configurable out-of-the-box, but i don't think that has something to do with, to be fair. Honestly, i don't remember having had the issue with the colors on Alacritty, because, at the time, i didn't used it as it was in beta or something...

You can both add that to a key-binding in your wm's rc, or create an alias for that in your shell rc.

Also, as stated before:

you need to set the $TERM variable to be the same in your .rc and in .tmux.conf files. To know if something is wrong, i recommend using :checkhealth command inside neovim.

Colors now behave the same in and out of tmux :)

The file for the sxhkd configuration is on my GitHub, line 06.

I know that necroposting isn't good, but I had to do it as this problem had haunted me for several months, and it was very hard to find a sulution even though i searched in the web on a variety of forums and FAQs, read the docs about the software in question and couldn't find something relevant.

I'm using these configurations in my ~/.tmux.conf file, should works with you also:

Not the answer you're looking for? Browse other questions tagged terminal vim tmux nvim or ask your own question.

4
Getting 256 colors to work in terminal multiplexer
3
Vim colors conflicting with terminal ones
6
VIM solarized color scheme looks wrong when using tmux
53
Why do Vim colors look different inside and outside of tmux?
2
Linux Mint terminal colors not working
0
terminal in Tmux is 256color but vim isn't
0
vim colorscheme completely wrong inside screen or tmux sessions
3
SSH tmux terminal lines unreadable due to wrong overlap, interleaving