What are the relations between processes, kernel threads, lightweight processes and user threads in Unix? [closed]

Unix Internal by Vahalia have figures showing the relations between processes, kernel threads, lightweight processes, and user threads. This book gives most attention to SVR4.2, and it also explores 4.4BSD, Solaris 2.x, Mach, and Digital UNIX in detail. Note that I am not asking about Linux. 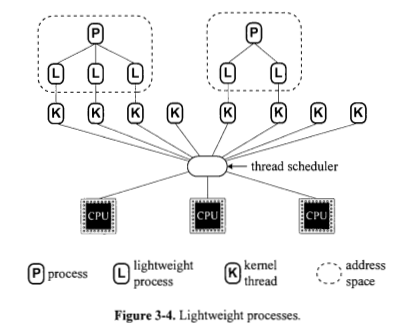 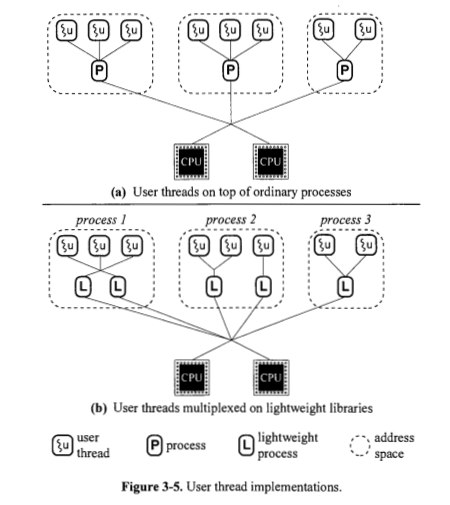 I asked a similar question for Linux Is a light weight process attached to a kernel thread in Linux? I guessed it might be because the book Operating System Concepts introduces the concepts implicitly using Unix, and Unix and Linux might differ, so I read about Unix kernel.

I appreciate the current reply, but I am hoping to reopen the post so that I can accept other replies.

In their introduction, Daniel P. Bovet, and Marco Cesati, said:

Technically speaking, Linux is a true Unix kernel, although it is not a full Unix operating system, because it does not include all the applications such as filesystem utilities, windowing systems and graphical desktops, system administrator commands, text editors, compilers, and so on. What you read in this book and see in the Linux kernel, therefore, may help you understand the other Unix variants too.

In the next paragraphs, I will try to address your points of view based on my understanding to the facts presented in "Understanding the Linux Kernel" which is to a very large extent are similar to those in Unix.

What a process means?:

Processes are like human beings, they are generated, they have a more or less significant life, they optionally generate one or more child processes, and eventually they die. A process has five fundamental parts: code ("text"), data (VM), stack, file I/O, and signal tables

The purpose of a process in the Kernel is to act as an entity to which system resources (CPU time, memory, etc.) are allocated. When a process is created, it is almost identical to its parent. It receives a (logical) copy of the parent's address space and executes the same code as the parent, beginning at the next instruction following the process creation system call. Although the parent and child may share the pages containing the program code (text), they have separate copies of the data (stack and heap), so that changes by the child to a memory location are invisible to the parent (and vice versa).

An executing program needs more than just the binary code that tells the computer what to do. The program needs memory and various operating system resources in order to run. A “process” is what we call a program that has been loaded into memory along with all the resources it needs to operate. A thread is the unit of execution within a process. A process can have anywhere from just one thread to many threads. When a process starts, it is assigned memory and resources. Each thread in the process shares that memory and resources. In single-threaded processes, the process contains one thread. The process and the thread are one and the same, and there is only one thing happening. In multithreaded processes, the process contains more than one thread, and the process is accomplishing a number of things at the same time.

The mechanics of a multi-processing system, include lightweight and heavyweight processes: 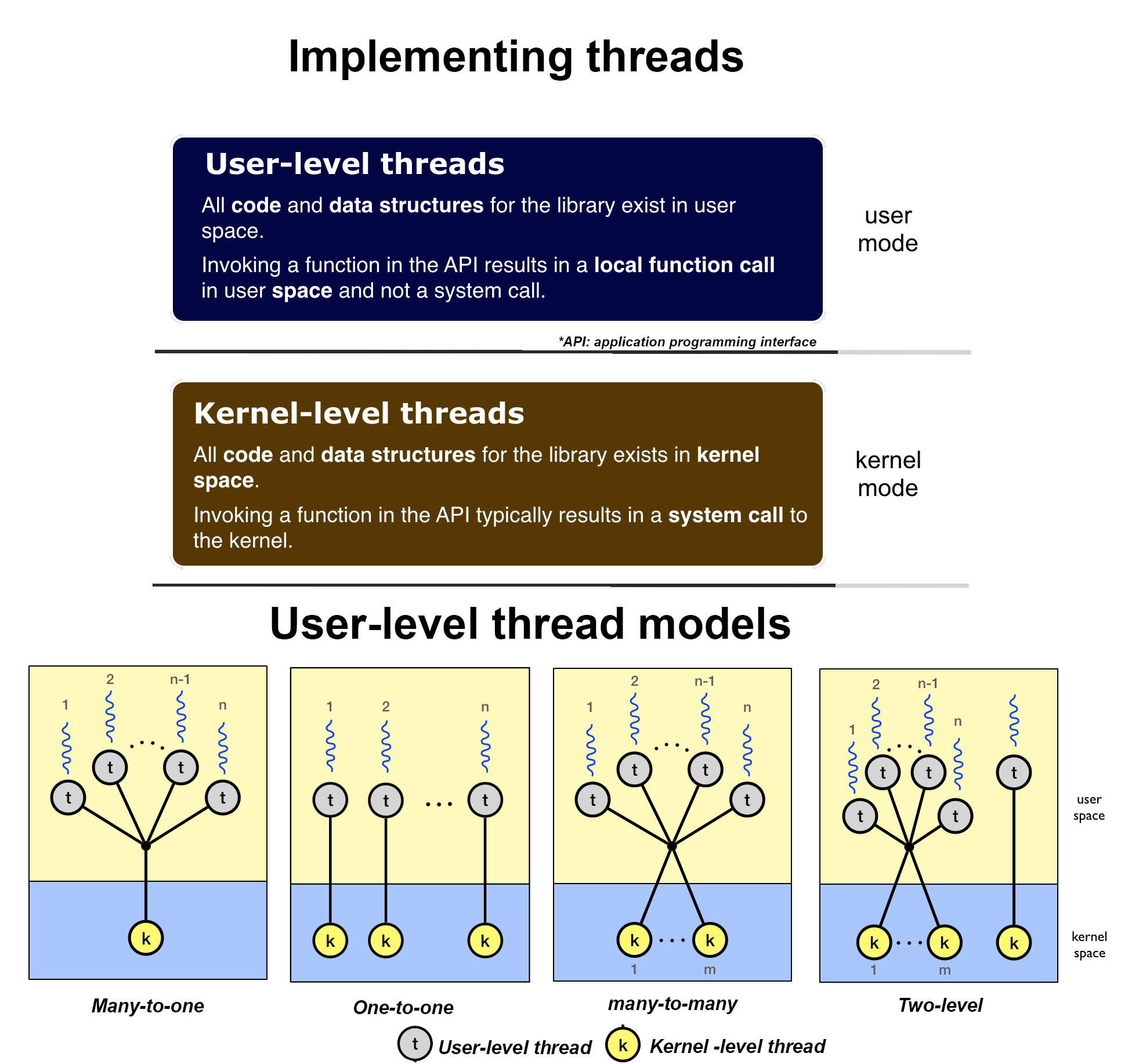 Now, let's simplify all these terms (this paragraph is from my perspectives). Kernel is an interface between software and hardware. In other words, the kernel acts like a brain. It manipulates a relationship between the genetic material (i.e. codes and its derivatives software), and body systems (i.e. hardware or muscles).

This brain (i.e. kernel) sends signals to processes which act accordingly. Some of these processes are like muscles (i.e. threads), each muscle has its own function and task but they all work together to finish the workload. The communication between these threads (i.e. muscles) is very efficient and simple, so they achieve their job smoothly, quickly and effectively. Some of the threads (i.e. muscles) are under user's control (like the muscles in our hands and legs). Others are under the brain control (like the muscles in our stomach, eye, heart which we don't control).

User-space threads avoids the kernel and manages the tasks itself. Often this is called "cooperative multitasking", and indeed it is like our upper and lower extremities, it is under our own control and it works all together to achieve work (i.e. exercises or ...) and doesn't need direct orders from the brain. On the other side, Kernel-Space threads are completely controlled by the kernel and its scheduler.

In a response to your questions:

Not the answer you're looking for? Browse other questions tagged kernel process bsd thread system-v or ask your own question.