Is a light weight process attached to a kernel thread in Linux?

Then why does the following quote from Operating System Concepts mean by saying that a light weight process is attached to a kernel thread? (Note that this book is for general OS concepts, and the quote doesn't say it is for Linux, but most parts of the book are applicable to Linux)

A ﬁnal issue to be considered with multithreaded programs concerns communication between the kernel and the thread library, which may be required by the many-to-many and two-level models discussed in Section 4.3.3. Such coordination allows the number of kernel threads to be dynamically adjusted to help ensure the best performance.

Many systems implementing either the many-to-many or the two-level model place an intermediate data structure between the user and kernel threads. This data structure—typically known as a lightweight process, or LWP—is shown in Figure 4.13. To the user-thread library, the LWP appears to be a virtual processor on which the application can schedule a user thread to run. Each LWP is attached to a kernel thread, and it is kernel threads that the operating system schedules to run on physical processors. If a kernel thread blocks (such as while waiting for an I/O operation to complete), the LWP blocks as well. Up the chain, the user-level thread attached to the LWP also blocks. 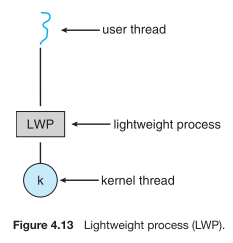 where several concepts are defined in the book as following, in particular the definitions of kernel threads and user threads might be different from those that I mentioned in my questions at the beginning of this post:

The many-to-one model (Figure 4.5) maps many user-level threads to one kernel thread. Thread management is done by the thread library in user space, so it is efﬁcient 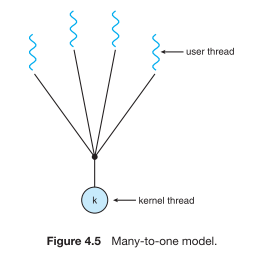 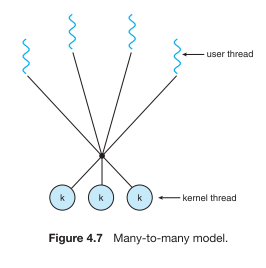 Not the answer you're looking for? Browse other questions tagged linux linux-kernel process thread or ask your own question.

14
What are the relations between processes, kernel threads, lightweight processes and user threads in Unix?

4
What exactly is the lwp and threads in solaris?
3
Thread process in linux
5
Differences between system processes, and user processes, kernel control paths and kernel thread
12
Are kernel threads processes and daemons?
5
Does Linux not distinguish between processes and threads?
1
Is it possible for a kernel space thread or process to be child of a userspace process?