Does Linux not use segmentation but only paging?

The Linux Programming Interface shows the layout of a virtual address space of a process. Is each region in the diagram a segment? 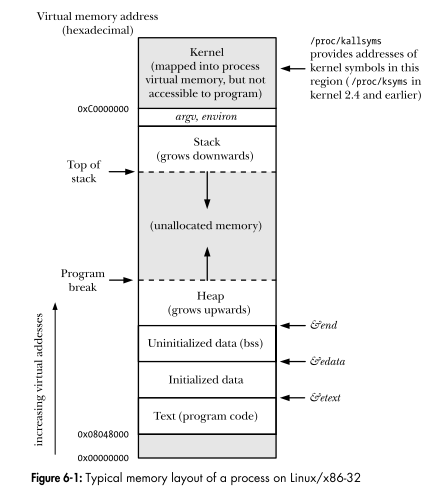 From Understanding The Linux Kernel,

• Memory management is simpler when all processes use the same segment register values—that is, when they share the same set of linear addresses.

• One of the design objectives of Linux is portability to a wide range of architectures; RISC architectures, in particular, have limited support for segmentation.

The 2.6 version of Linux uses segmentation only when required by the 80x86 architecture.

The x86-64 architecture does not use segmentation in long mode (64-bit mode).

It is no longer possible for the OS to limit which ranges of the "linear addresses" are available. Therefore it cannot use segmentation for memory protection; it must rely entirely on paging.

Do not worry about the details of x86 CPUs which would only apply when running in the legacy 32-bit modes. Linux for the 32-bit modes is not used as much. It may even be considered "in a state of benign neglect for several years". See 32-Bit x86 support in Fedora [LWN.net, 2017].

(It happens that 32-bit Linux does not use segmentation either. But you don't need to trust me on that, you can just ignore it :-).

While the segmentation system (in 32-bit protected mode on an x86) is designed to support separate code, data and stack segments, in practice all the segments are set to the same memory area. That is, they start at 0 and end at the end of memory(*). That makes the logical addresses and linear addresses equal.

This is called a "flat" memory model, and is somewhat simpler than the model where you have distinct segments and then pointers within them. In particular, a segmented model requires longer pointers, since the segment selector has to be included in addition to the offset pointer. (16-bit segment selector + 32 bit offset for a total of 48 bit pointer; versus just a 32-bit flat pointer.)

If you were to program in 16-bit protected mode on the 286, you'd have more need for segments, since the address space is 24 bits but the pointers are only 16 bits.

(* Note that I can't remember how 32-bit Linux handles the kernel/userspace separation. Segmentation would allow that via setting the userspace segments limits so that they don't include the kernel space. Paging allows for it since it provides a per-page protection level.)

The x86 still has the segments and you can't disable them. They're just used as little as possible. In 32-bit protected mode, the segments need to be set up for the flat model, and even in 64-bit mode they still sort of exist.

As the x86 has segments, it is not possible to not use them. But both cs (code segment) and ds(data segment) base addresses are set to zero, so the segmentation is not really used. An exception is thread local data, one of the normally unused segment registers points to thread local data. But that is mainly to avoid reserving one of the general purpose registers for this task.

You already quoted the reasons, paging is easier and more portable.

These are 2 almost-totally-different uses of the word "segment"

So multiple different programs could be loaded to different linear addresses, or even moved after starting, without changing the 16 or 32-bit offsets relative to the segment bases.

But then you have to know which segment a pointer is relative to, so you have "far pointers" and so on. (Actual 16-bit x86 programs often didn't need to access their code as data, so could use a 64k code segment somewhere, and maybe another 64k block with DS=SS, with the stack growing down from high offsets, and data at the bottom. Or a tiny code model with all segment bases equal).

How x86 segmentation interacts with paging

Notice that segmentation does not let you use more than 32 or 64 bits of virtual address space in a single process (or thread), because the flat (linear) address space everything is mapped into only has the same number of bits as offsets themselves. (This wasn't the case for 16-bit x86, where segmentation was actually useful for using more than 64k of memory with mostly 16-bit registers and offsets.)

The CPU caches segment descriptors loaded from the GDT (or LDT), including the segment base. When you dereference a pointer, depending on what register it's in, it defaults to either DS or SS as the segment. The register value (pointer) is treated as an offset from the segment base.

Since the segment base is normally zero, CPUs do special-case this. Or from another perspective, if you do have a non-zero segment base, loads have extra latency because the "special" (normal) case of bypassing adding the base address doesn't apply.

The base and limit of CS/DS/ES/SS are all 0 / -1 in 32 and 64-bit mode. This is called a flat memory model because all pointers point into the same address space.

(AMD CPU architects neutered segmentation by enforcing a flat memory model for 64-bit mode because the mainstream OSes weren't using it anyway, except for no-exec protection which was provided in a much better way by paging with the PAE or x86-64 page-table format.)

So basically x86 segmentation is used for TLS, and for the mandatory x86 osdev stuff that the hardware requires you to do.

Footnote 1: Fun history: there are mailing list archives of messages between kernel devs and AMD architects from a couple years before AMD64 silicon was released, resulting in tweaks to the design of syscall so it was usable. See links in this answer for details.

Linux x86/32 doesn't use segmentation in the sense that it initializes all segments to the same linear address and limit. x86 architecture requires the program to have segments: code can only be executed from the code segment, stack can only be located in the stack segment, data can only be manipulated in one of the data segments. Linux bypasses this mechanism by setting all segments in the same way (with exceptions which your book doesn't mention anyway), so that the same logical address is valid in any segment. This is in fact equivalent to having no segments at all.

Not the answer you're looking for? Browse other questions tagged linux kernel virtual-memory or ask your own question.