I have a system running. It creates 1 folder for each day, naming it by date. Inside each folder, it stores videos from security cameras, naming the files by time. You'd have something like this: 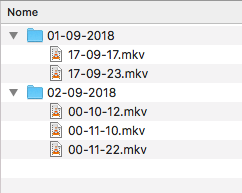 The folders are uploaded to the cloud, file by file, as it is created. However, my local storage limit is 16GB.

This way, I've made a script (in bash) to keep deleting old files as storage reaches a certain percentage. This is what the script should do:

Thing is that the script isn't (apparently) counting the number of files inside the oldest folder (when more then one folder is detected) correctly.

Instead of going back to the root folder and delete the oldest empty folder, it keeps deleting files from the newest folder (apparently).

In other words, when you have 2 folders (the oldest one empty and the newest one with videos in it), it should delete the oldest and empty folder, but I keep getting:

I hope we don't need to bother about whether we have a single folder or multiple folders. if we remove the files w.r.t modified time.

And an empty folder would hardly occupy space of 4Kb. If you would like to remove all empty folder except the latest, include below code.

Not the answer you're looking for? Browse other questions tagged bash shell-script scripting or ask your own question.

0
Unix Shell script to delete all traces of itself after execution through crontab
7
Delete folders which not match a list
0
Uncompressed .lzo files in parallel in both the folders simultaneously and then delete the original .lzo files
1
Shell script to ls and execute command on ls result
1
Bash script to move through folders, unzip, and move files up one directory
2
Moving child folders and their content up one level and deleting the empty folder, across many folders with automation
1
Shell script to Unzip files to folders in destination with same name minus the .zip, also move every none zip to same location