I want to switch from windows to linux, but before the switch I would like to try them out in the Live CD.

I downloaded the iso and created a multiboot usb stick ( by YUMI Multiboot USB Creator ).

I can boot into Ubuntu Desktop 12.04 64 bit LTS and Linux Mint 13 Mate 64 bit. I can access the hard drive from there and I tried some video with the default player comes with them ( e.g: GNOME Player and VLC Player ). The player opened but the video didn't play. However, I can play the same video in Puppy Linux. ( Puppy Linux doesn't has a choice over 32-bit or 64-bit )

Maybe my CPU didn't support 64 bit? Here is a snap from CPUZ: 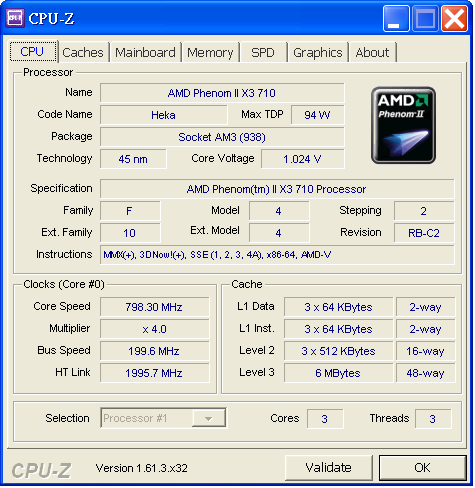 Yesterday I tried to boot into Linux Mint and give it a second try. The video played without problem. Today I boot it again and it didn't work. No Video is able to play. Only the video player appeared with a black screen. No warning, no error message.

I wonder if it is about the video card? I am using ATI Radeon HD 4830 video card. I've heard linux doesn't have good support for hardware. But how can I be sure of this? I can't install driver within the live cd linux ( or can I? ) before I really install them on my hard drive.

"Can't play a video" has nothing to do with a CPU being 32 / 64-bit. Let me dispell any misconception you may have about that.

If your CPU were 32-bit-only and you tried to boot a 64-bit operating system, it would not boot. Period. You would never get all the way to a graphical environment, only to find that some application on the desktop, like a video player, randomly requires 64-bit where the rest of the operating system doesn't.

Most likely the video doesn't play due to missing codecs, or graphics drivers. If you are trying to play proprietary media formats such as almost anything from the MPEG group, including a lot of media that is encoded using MPEG formats but labeled something completely different (e.g. "XviD", "DivX", etc.), chances are these formats are not available out of the box on most distros. That's because most distros avoid shipping patent-encumbered software with their operating system, as it may be a legal liability in the US and countries respecting US patents.

I don't think VLC is installed by default on Ubuntu, but Totem should be. You can install the ubuntu-restricted-extras package to get appropriate codecs for Totem, though that still may not support all the media you want to watch. One good way to get (legal!) access to all the proprietary codecs is to use Fluendo's gstreamer plugin package, which can be purchased for a small yearly subscription fee (the fee is for access to updated packages, but you can use the package you download for an unlimited time, it doesn't phone home). Fluendo's codecs are generally higher quality, supporting more file formats, and definitely more legal than what you can find by downloading the gstreamer ugly plugins set.

liveCDs will not have all required plugins by default to media files. This looks like a plugin problem which i suggest you should connect to internet with the livecd, and try playing the video. Use the default media player and it will suggest the missing plugins. You should follow the instructions to download/install it and then try playing the files.

With AMD X3 processor and AMD HD4830 graphics you will have no problem playing videos under Linux. Don't worry about LiveCDs not being perfect with this task.

Check other aspects of using Linux, and if it fullfills your expectations, just install it.

May be the tipical codec problem when you use a "demo" of a system properly installed.

This trouble can be solved when you install the system and the upgrades of the software which can include xvid, divx, 3gp, mp4, wmv, flv and other "basic" video codecs different of mpg.

Not the answer you're looking for? Browse other questions tagged linux livecd or ask your own question.

3
PS/2 Keyboard & Mouse not working AFTER boot
1
How to make dual boot live dvd
1
Old laptop won't boot from live CDs
2
Is it viable to run Live Linux on a Laptop with a failing hard drive?
0
I can't boot any distro from USB / CD to install or to use it live
1
Linux Live CD crash after GRUB selection