Does `ping` connect to a ICMP server?

when I run ping host in terminal, is ping a ICMP client?

Does ping connect to a ICMP server running on host? What is the program which is the ICMP server?

Does ping connect to a port on host, and is that port number the one for the ICMP server?

PING is indeed a client.

Many professionals and network monitoring software use echo-request/reply successful ICMP messages processing as an indicator a system is up/down. However this is a convention, and not strictly mandatory. For instance, I can define in Nagios that I will monitor my Linux servers with the SSH TCP/22 port instead of using PINGs.

The concept as an established connection does not exist per se as in TCP connections. ICMP is a not a connection oriented protocol.

As stated earlier, the concept of port also does not exist - the Linux kernel processes an ICMP packet, and throws an answer to it accordingly, forgetting then about the deed (ignoring other mechanisms as rate limiting, for instance).

Ping is also available to user with special privileges, or has to be a setuid binary, as it uses RAW sockets to manufacture a ICMP packet.

You can also define if the kernels answer or not to an ICMP echo-request message with a sysctl/proc setting.

To disable answer to ICMP pings do:

Or to enable it again:

As for the part of the kernel responsible for handling ICMP messages, it is found in icmp.c in the Linux kernel sources as in https://github.com/torvalds/linux/blob/master/net/ipv4/icmp.c

As for the ICMP packet see this image: 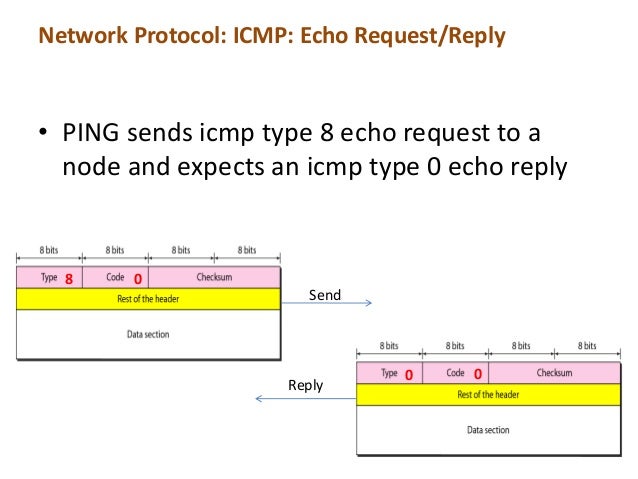 As for more kernel definitions:

Not the answer you're looking for? Browse other questions tagged networking ping or ask your own question.

-1
What is the relation between test results of ping and telnet?

6
qemu - two clients (tap0 & tap1) via br0 can't ping eachother but server pings ok
7
Is there an ICMP echo request service?
2
Forward ICMP Ping Packets to Interface
7
Ping works only with IP addresses (not with domain names)
0
Linux Hosts Cannot Communicate unless they Ping Each Other
1
Ping does not work on secondary interface in server
0
Does ping omit iptables / postrouting rules
0
From server cannot ping server itself by its hostname while can ping by its IP