What does physical address 0 in x86 Linux contain?

I am not sure if this question should go here or in reverseengineering.stackexchange.com

This is what I find in qemu monitor:

I am not sure what to make of those values. It does not look like an interrupt descriptor table (dereferencing those values gives all nulls). So what am I actually looking at here?

Whatever your firmware left it containing.

On an ideal modern system, the processor never enters real mode at all, as I explained in this SU Q&A titled: What mode do modern 64-bit Intel chip PCs run the boot sector in?, the first KiB of physical memory is as irrelevant as Johan Myréen made it out to be in another answer here. But many modern firmwares (still) have compatibility support, meaning that

In practice, firstly, firmwares often mark the first page of physical memory as "boot services code", meaning that an operating system can claim it and just go ahead and use it as part of its physical memory pool, but only after the boot-time services of the EFI firmware have been shut down by the operating system and the firmware reduced to providing its run-time services only. An example of this can be seen in the Linux kernel log (with the add_efi_memmap option) shown by Finnbarr P. Murphy:

which xe decodes with another program in a more human-readable form as:

In practice, secondly, Linux explicitly ignores this range of physical memory even if the firmware says that it can go ahead and use it. You'll find that on both EFI and non-EFI firmwares alike, once Linux has the physical memory map it patches it (in a function named trim_bios_range), resulting in kernel log messages such as:

So whilst in theory that range of physical memory could contain arbitrary code or data, depending from the momentary needs of the kernel memory allocators and demand-paged virtual memory; in practice Linux just leaves it untouched as the firmware originally set it up.

And on your system the firmware had populated it with real mode IVT entries. Real mode IVT entries are just 16:16 far pointers, of course, and if you look at your memory using a 2-byte hexdump you can actually see this pretty clearly. Some examples:

The original 8086 processor architecture (implemented as Real Mode in 80286+ processors) has no relevance for Linux, which operates in Protected Mode. There is no interrupt vector table at physical address 0, instead an Interrupt Descriptor Table containing Interrupt Descriptors is used. The IDT can be located anywhere in memory.

Here's an alternative way to dump the contents of memory inside the system vs. having to do it externally:

The upper portion above 000c0000 could be bootloader related. Why would I suspect this? The code 55aah at location 000c0000 can typically be a mark in memory for things such as a trigger for the BIOS to run a secondary bootloader. 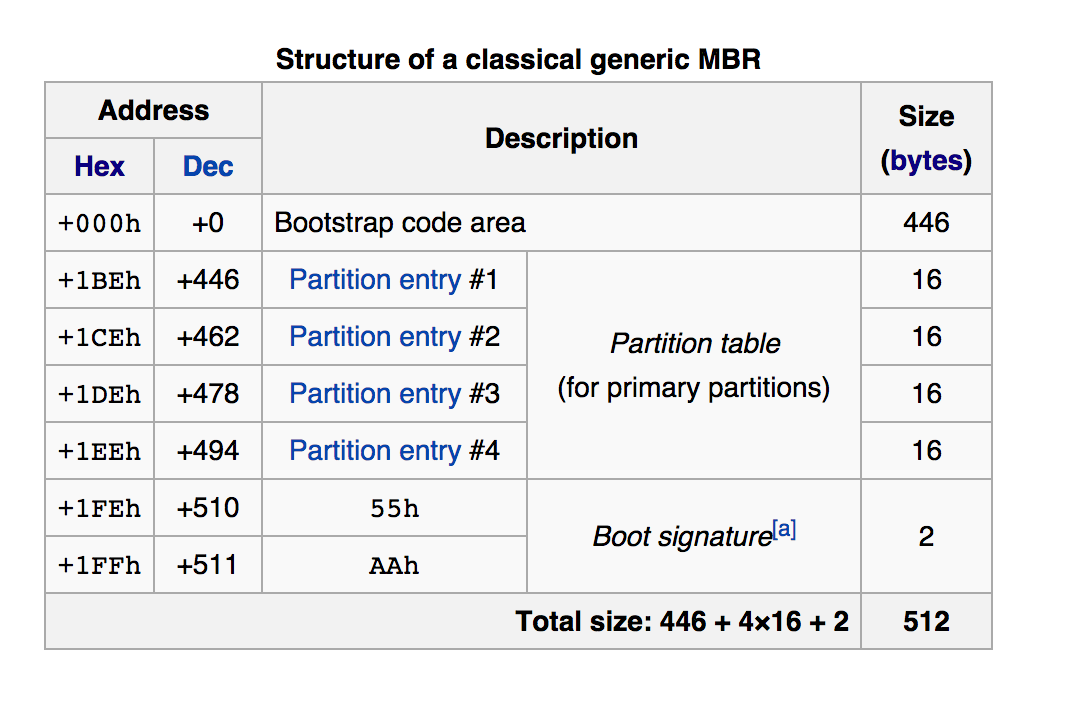 However, given this 55aah occurs in the c0000h-effffh range it's more likely this portion is the PNP Expansion Header:

As to the 53ffh data that is at the beginning. It's unclear to me what that actually is. Further researching it it's likely something that the Linux kernel wrote there after the BIOS' bootloading of the MBR handed off to the Linux kernel to boot.

Usually, the bootloader will load the kernel into memory, and then jump to the kernel. The kernel will then be able to reclaim the memory used by the bootloader (because it has already performed its job). However it is possible to include OS code within the boot sector and keep it resident after the OS begins

Digging further I was able to find this paragraph from a research paper titled: Malicious Code Injection via /dev/mem:

/dev/mem is the driver interface to physically addressable memory. The original intent of both mem and kmem was for assisting in debugging the kernel. We can use the device like a regular character device, using lseek() to select an address offset. The kmem device is similar but provides an image of kernel memory in the context of virtual addressing. The Xorg server makes use of the mem device to access VESA video memory as well as the BIOS ROM Interrupt Vector Table (IVT) located at physical address 0x00000000 to manipulate video modes in VM86 mode. DOSEMU also uses this to access the BIOS IVT to be able to make BIOS Interrupts for various tasks (disk reads, printing to the console, etc).

Not the answer you're looking for? Browse other questions tagged memory x86 or ask your own question.

21
How to dump memory image from linux system?

8
What are the platforms that Linux is being used frequently on besides x86?
4
Does Linux provide Predictive Self-Healing on x86?
2
Any x86-64 Linux assembler?
0
What is x86/mm?
2
How does linux on x86_64 recover the 'lost' physical memory masked by memory-mapped IO?
0
Smallest modern Linux distro for x86 architecture
0
(Why) does the Linux kernel use an identity mapping for its virtual address space?