Autorandr but for audio devices?

But I would also love a similar solution for audio. When at my desk, I want the "fallback devices for both input to be my Bluetooth Jabra headset and for output to be my "simultaneous output to all devices" pseudo-device, but in meeting rooms I will usually connect a USB (Jabra or Logitech) meeting room speakerphone device -- and then I need to go into the Volume Control panel and set up the default devices.

If I could have the whole thing automated, so that newly connected devices would be automatically selected as fallback input/output, that would be so neat!

Caveat: To win the bounty, the answer must describe a solution that works automatically when hardware is plugged in/out. It would be acceptable to trigger a script to run whenever autorandr runs (but autorandr itself has no such slipstreaming capability). 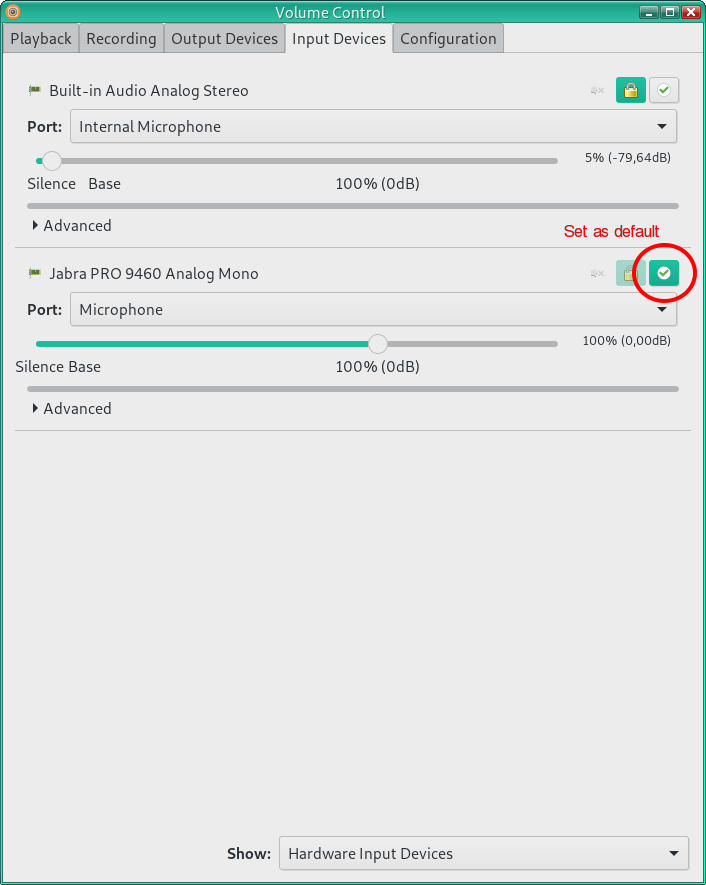 Edit: Inspired by @telcoM's answer, I can now include the list of sources and sinks recognized by my system (except the ones in the meeting rooms which I am not currently connected to):

By default, Pulseaudio remembers which output device each playback source was associated with, and likewise for input devices and recording software. This is the primary source of device associations for vanilla Pulseaudio.

The fallback device is only used when e.g. a playback source has no record of previous association, or the previously-associated device is no longer available.

At least KDE has a multimedia settings dialog you can use to set a priority order for your audio input/output devices, separately for each type of audio input/output (communications vs. audio or video playing/recording, for example). This seems to modify the behavior of Pulseaudio.

This blog and the mentioned paswitch utility might be useful for you:

I earlier had a script for this purpose, but paswitch is better as it switches both active and previously-remembered sources to a new output in addition to switching the default/fallback output. Unfortunately it only handles the output side.

To switch active clients that have already started to use a particular microphone, you'll need to do something like this:

This first changes the default microphone to the one specified in $SOURCEID, and then moves any active applications to this new mic.

But if an application was run before using a different audio source device, and this source is still available on the system, Pulseaudio will by default connect it to its old source instead of the new default source, unless its persistence feature is switched off.

Oho! I found the correct commands to obtain the names of the inputs and outputs! This is mainly from this answer to another question, but really credit goes to telcoM for pointing me towards pactl.

This allows me to set the sources:

And also the sinks:

These commands, then, I can put in "hook scripts" for autorandr to trigger. I just need to connect the USB audio devices before the video cables, and everything will be awesome!

Not the answer you're looking for? Browse other questions tagged usb audio or ask your own question.