How to have terminal open when running shell script?

On my OS, there is no way to manually set the brightness, so I wrote a small shell script to do so:

But the problem is that running the script directly from the GUI runs it without prompting for user input on the terminal (answer = 0), and right clicking to run in terminal is necessary for the script to prompt for user input.

How can one display the terminal directly when executing said script?

Using xterm you can simply run your application as an argument to whatever terminal emulator you're using. Here I'm using xterm:

Which will result in your application running inside of a xterm terminal: 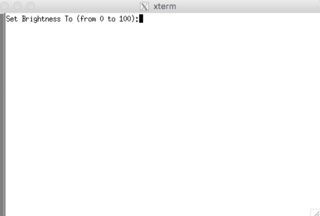 The same method with gnome-terminal. 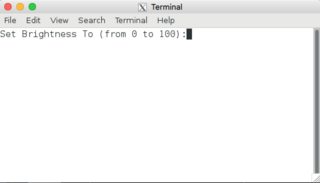 You could use the GUI toolkit zenity to open a dialog box asking for a response to be typed in, then take what was typed in and use the rest of your script to set it.

If we run it, but merely echo the last line out instead of running it we can see what it'll do: 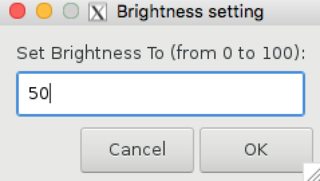 Another way to do this is to invoke the terminal program and tell it to run the command. Most terminals have an option to do this; for xterm (which is pretty old-school), you can do

Not the answer you're looking for? Browse other questions tagged shell-script terminal puppy-linux or ask your own question.

1
Missing "Run in terminal" in KDE
0
Backlight powersaving: Working in X11, but backlight does not turn off on virtual terminal. Gentoo, Asus EeePC 1015bx
0
Running a program (command) on terminal after login screen in Ubuntu 14.04
4
How do I run a command in a new terminal window in the same process as the original?
2
Opening an executable via GUI does nothing although opening it via terminal works
0
Process Ignores Signals + Terminal/Shell Concept
1
how to check if read user input has more than one argument shell script?