Trying to Install Linux Alongside Windows 10

I'm trying to install Linux on a separate partition on my hard drive. I did it once on a previous machine, and tried to do it on my new one, but have run into an issue.

I've been trying to use a live install from a USB drive, and all is well until I get to the point I try to boot into the live demo. It goes to the Ubuntu load screen, works for a few moments, then hangs up without finishing, requiring a hard reset.

Then, when I try to reformat the flash drive, it says that it's max capacity is only 30-ish kb. I'm using WinDisk Imager to put the image on the drive, and ubuntu-16.04.3-desktop-amd64 image from the ubuntu website. What could I be doing wrong?

This flowchart shows how to make a bootable USB for installing Ubuntu and troubleshoot problems booting Ubuntu from it. 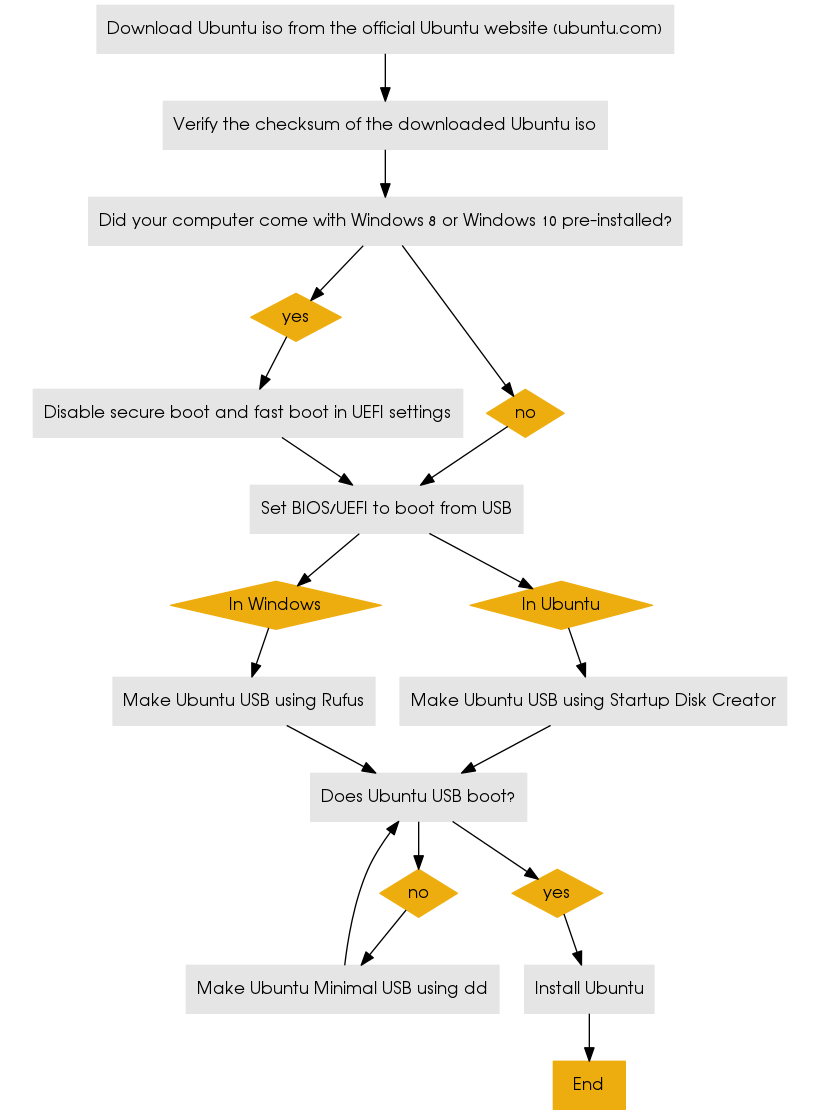 How to make an Ubuntu Minimal USB using dd

While the minimal iso image is handy, it isn't useful for installing on UEFI-based systems that you want to run in UEFI mode. The mini iso lacks the proper files for booting the computer in UEFI mode. Thus the computer will boot in BIOS compatibility mode, and the installation will be in BIOS mode.

I found these steps in lifewire for dual booting Ubuntu alongside Windows 7:

First of all, take a backup of your system.

TechMint also has a similar document.

Not the answer you're looking for? Browse other questions tagged linux ubuntu live-usb or ask your own question.

1
Ubuntu 13.04 with LinuxLive USB Creator and persistence forgets desktop background and keyboard layout
1
Should I use IsoHybrid for booting Flash Drives?
0
What live OS with reasonably small size that I can use to rescue files on a laptop?
1
Apt: install packages to a different location
0
Can a custom Kali live-build image be built while running a live-build image?
3
Debian 9 does not boot after installing on USB drive with UEFI
0
Why am i getting the following error while installing Linux Mint?
2
Reformat dev/loop0 to dev/sdX