In the Cinnamon desktop, if you open System Settings> Windows, you can then set the

There are 6 choices for each button:

What does Sticky do?

The sticky button icon (configured 4th from left below) toggles.

and after being clicked:

When Sticky is toggled on the window appears on all Workspaces, i.e. not just the current Workspace.

You can also adjust Sticky by clicking the Menu icon in the title bar (i.e. the down arrow w/ bar above it icon):

and then select either 'Always on Visible Workspace' OR 'Only on This Workspace', here: 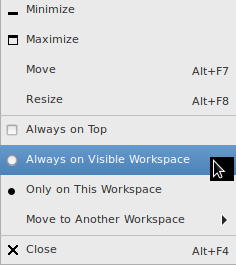 Not the answer you're looking for? Browse other questions tagged cinnamon theme or ask your own question.

1
How do I make themes apply to windows as well as system elements?
2
Use CTRL-SPACE to open menu on Linux Mint
0
No Menu Bar, Windows not visible (Linux Mint 17.2 Cinnamon)
1
Missing menu bar on Cinnamon desktop on CentOS 7. Where are the Cinnamon settings located in CentOS 7?
0
Closing/killing applications in Linux Mint (Cinnamon)