Running `scp` client -> server results in scp command not found (on server), why?

We've intentionally built OpenSSH using this switch: --with-default-path blank. We're attempting to deploy OpenSSH so that the server does not include the scp binary.

Now when we try to do an scp from a local machine (client) to a remote machine (server) we're getting this message:

The server appears to expect the scp binaries to be present on both sides (client & server). So why do we need the scp binary on the remote end? Isn't it sufficient to only have it on the local machine (client)? Can anyone please clarify?

NOTE: If scp is not present on the remote server where we want to copy some file, it throws out an error like this on the remote (server):

I think you've answered your own question: you need scp on both sides.

The local instance of scp invokes scp remotely with the undocumented -t flag to handle the file transfer protocol.

If you really don't have scp, but you do have an ssh server, you might be able to use sftp to transfer the files, as in many cases the SFTP server component is built in to the ssh server.

The SSH protocol is facilitating multiple overlapping "services" of which file copying is one of them. The way the SSH protocol does this is by launching scp -t as a child process on a server, when a client connects to it using the scp command line tool.

Each server where SSH is installed requires a full compliment of CLI tools to provide all the "services" that are part of SSH (ssh, scp, sftp). There location on disk is only required by the managing sshd server daemon. This means they can be in any location, the clients are not aware nor need to be, they're only communicating with sshd via TCP port (typically 22) as client/server.

I've started a scp from my laptop to my Raspberry Pi server (pi-hole), and then paused it mid-stream via Ctrl+Z.

If I then ssh to the Raspberry Pi server and do a ps:

We can see that the application server scp is running, and writing our file to /tmp directory. We can see the file in this paused state being written as well:

If we let the scp continue by un-pausing it on the laptop (client):

It'll finish and if we look again on the Raspberry Pi (server) you'll see that the scp application is no longer running:

OpenSSH is a bit unique in that it starts server applications (daemons) on demand just for the duration of a particular operation, and then once the transfer is complete, it terminates them.

The original daemon that's facilitating this is the ssh daemon:

Notice the parent/child hierarchy of scp, it's a child process of ssh.

Anatomy of a scp session

If you take a look at the OReilly SSH book there's a diagram that shows the mechanics of how scp connections work. 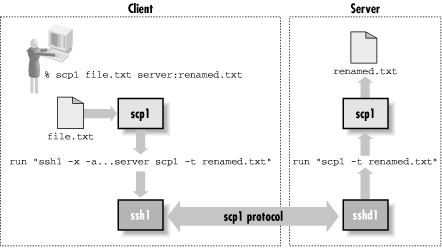 In the diagram above, you can see that when the scp <file> <server>:/<path> command is executed, it gets translated to something like this on the client side:

The client (scp) in this case is directing the sshd daemon on the client side to send a request to the server's sshd telling it to launch scp -t /tmp on the remote side.

Based on the documentation this is by design how scp uses SSH's tunnel.

I did some experiments where I made a copy of the scp binary to myscp and then ran this on the client. In every instance, the /usr/bin/ssh ... command still showed the -- someserver scp -t /tmp/..

This leads me to believe that the name of the scp executable, though referenced by the scp client when the ssh command is executed, does not get passed to the client directly. Rather the sshd daemon has the names for the various client tools that it supports, hardcoded within it.

This is further backed up by the details shown in the able above.

It's not possible to completely remove/disable the definition of --with-default-path when compiling sshd. Removing it completely, breaks sshd's ability to look for scp -t <dir> when an scp connection is triggered.

The best you can do to isolate sshd would be to designate a directory, which only contains the various binaries that make up OpenSSH.

It's obvious, you must have protocol in both instance to use it. If you want an alternative, can do with ssh as below.