I have a pair of Bluetooth headphones paired to the computer. Some apps are capable of playing through them if selected in pavucontrol. Others, though, won't let me select them. In fact, I can't change the output on those apps at all. I can click the button and see a list (as seen in screenshot), but if I select a different option it just goes straight back to HD-Audio Generic. Other apps (such as Spotify, as seen in the screenshot) allow me to switch from one device to another without issue. What's going on? 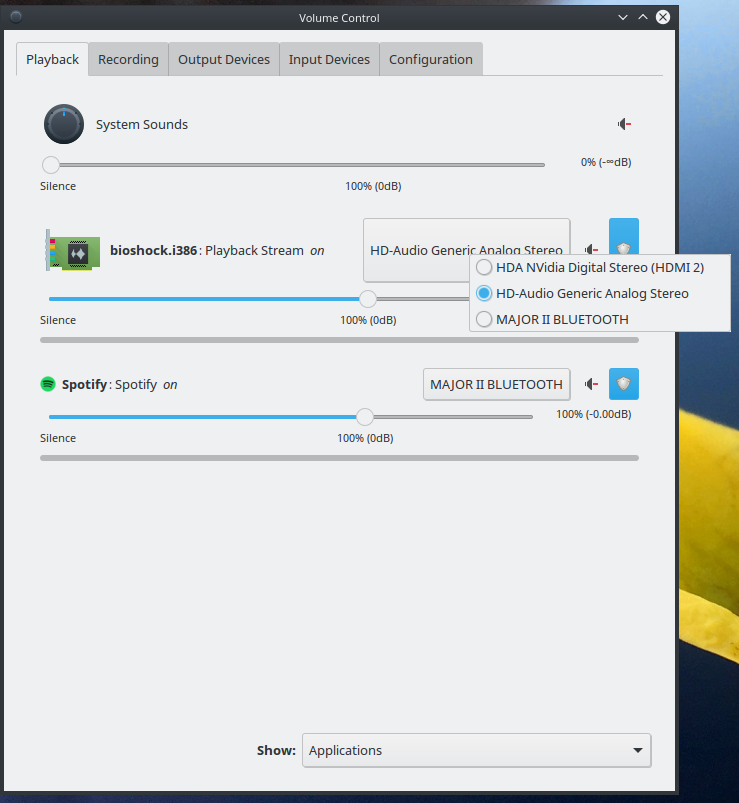 I've also tried to change the sink via the command line using pactl but for some reason it returns "Invalid Argument." A pretty much identical situation is described in this thread, but unfortunately it was never answered.

Here's the sink-input data from pactl:

I'm running Linux Mint 18.3 "Sylvia", KDE Plasma 5.8.9, KDE framework 5.36.0, and pulseaudio 8.3. The stubborn app that won't switch devices is BioShock Infinite, from Steam. I also tested The Talos Principle (also from Steam), 64-bit version, and it wouldn't allow me to change the output either.

It seems that some apps use something called OpenALsoft to control audio, and it has a configuration option that inhibits sink changes. To disable the option, you can create a config file.

Not the answer you're looking for? Browse other questions tagged audio pulseaudio or ask your own question.

4
PulseAudio cannot change the sink for one specific program

1
Pulseaudio over network - change output on-the-fly
41
Auto-switching PulseAudio profiles based on input(s) channel count
4
How do I set the output port on my audio card?
1
How to mute sound effects in pavucontrol?
0
PulseAudio won't remember USB dock default output