How to send all output to a pager by default?

git has a very nice feature for many of its commands: The output on an interactive terminal is passed to a pager by default, in such a way that it only keeps the pager open if there's more than one screenful of output, and it leaves the output on the terminal instead of clearing it when you exit. Is there some way to configure this to be the default for Bash in GNOME Terminal? That is, to send all TTY output (ideally including standard error) of every command to a pager.

The idea is that sometimes commands unexpectedly produce tons of output (especially in case of syntax or other errors), and some of that might even be lost because of the history settings of the terminal. It would be better to get half a chance to know what actually happened by seeing the output in a pager.

a couple of workaround are there:

I don't know if that's possible.

The next best thing may be piping things to less -FX. The -F flag will make less quit immediately if the entire input fits on one screen, and the -X will make it not clear the screen after you exit.

script is a round about way to doing just that. From the man page:

Konsole can suspend output with CTRL + S, all buffer in current window are freezed and able to use PageUp or PageDown to navigate.

But you need to increase buffer if necessary: 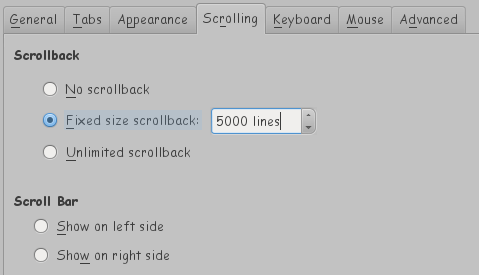 Not the answer you're looking for? Browse other questions tagged bash gnome-terminal pager or ask your own question.

9
Saving bash history from multiple Konsole not working correctly
2
Why does Bash readline sometimes try to parse the second word of a command out of context?
19
What is a pager?
14
How to start XTerm with prompt at the bottom?
2
Busybox pager with color capability?
2
Set debugfs pager
3
Using 'less' to leave text on screen for small files
6
changing default (man) pager