I'm experiencing an issue that when ALSA gives an XRUN underrun, the pulseaudio virtual sinks for the output that i've set start changing. Description below:

I'm then running some DSP commands which output into three aplay commands (aplay -v -r 48000 -f S16_LE). Then in pavucontrol I set each of those to a seperate virtual sink (Virtual0 - Virtual2), which I then use to pipe to another DSP program.

The problem is that whenever ALSA underruns due to high CPU usage, the source entry in pavucontrol will briefly dissappear, then come back a second or two later with the virtual sink changed to the last one that i've set in the pavucontrol GUI (usually Virtual2). So after a few underruns on each alsa instance all sources end up outputting to the Virtual2 sink.

I don't mind ALSA underruning every now and then (underruns only occur rarely when the CPU fully maxes out - this is a Raspberry Pi), but I just want the sources to restore to the same sink.

I think the problem is that each aplay source has the same name. So when one briefly disappears due to an underrun it goes to the last set sink for that name, which happens to be the last one set in the GUI.

Is there anything I can do to stop the source entry briefly dissappearing on an underrun? Or change the aplay source name to something unique?

Just a note: Interestingly, i've also tried outputting with mplayer, and this never glitches the source in pavucontrol, but unforuntately mplayer introduces an unacceptable latency on the audio (even with caching disabled), so it can't be used. aplay and play (from sox) both have the issue. 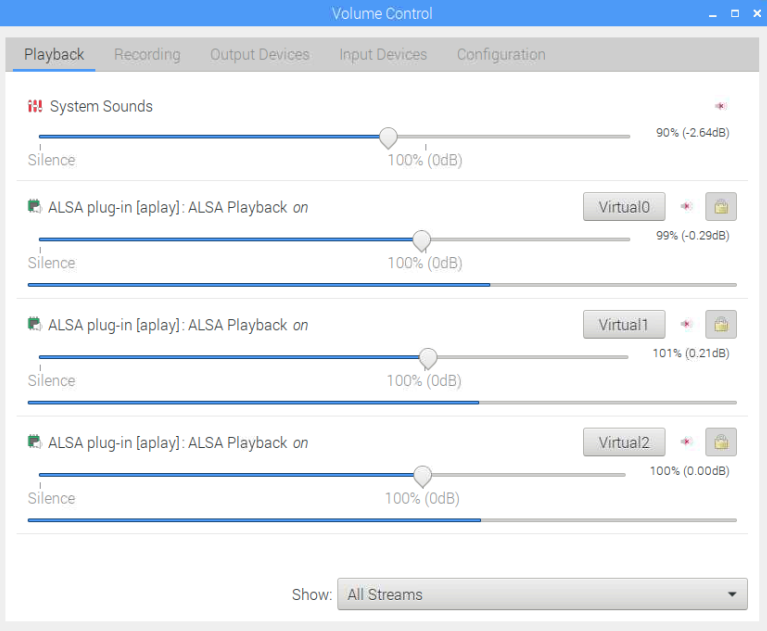 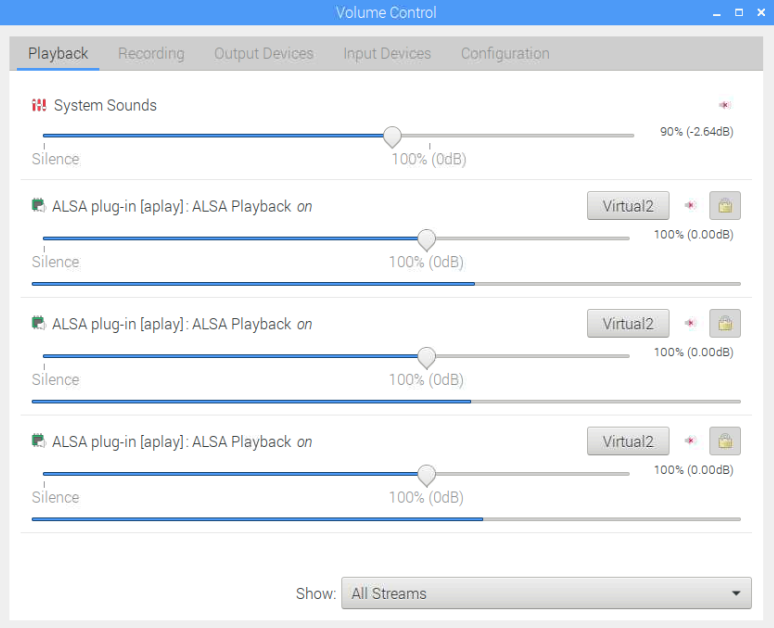 If anyone comes across a similar issue, I eventually found the solution. You need to create some virtual cards that have the device set in asound.conf, then output the audio to those cards.

Then run the output with

Now whenever the device 'dissappears' briefly from pulseaudio on an underrun, it will at least come back to the correct sink.

Make sure you create the Virtual sinks first like I described in the OP.

Not the answer you're looking for? Browse other questions tagged raspberry-pi pulseaudio alsa or ask your own question.

0
mpd fails to open ALSA device where aplay succeeds
4
How do I set the output port on my audio card?
2
Changing input audio source and setting it to mono on Debian Jessie/8 using commands
2
Changing PulseAudio Source port: 'availability=no' and priority
4
Headphone not working Linux Mint 18
1
Easiest way to record mic and line in simultaneosly and without pain?
1
synchronizing alsa volume to all pulse audio sinks
7
Redirecting Pulseaudio sink to a virtual source