How do locale settings work in a process?

I am trying to understand how locale works in Linux. This is how I think it works: 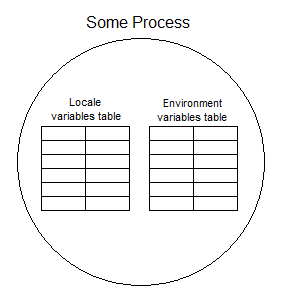 Am I correct in my understanding? And if I am correct, are all processes have a locale variables table, or is this table only present in programs written in C?

Your understanding is partly right, but only partly. One thing you're missing to understand this is how locale settings are used. Locale settings are used by various library functions that perform locale-dependent actions such as translating messages (which uses LC_MESSAGES), formatting numbers (LC_NUMERIC) and dates (LC_TIME, encoding and decoding text (LC_CTYPE), sorting text (LC_COLLATE), etc.

Take for example a function that formats a date. If asked to use a locale-dependent format, it will look up the rules for date formatting in the locale that was configured for use in the current process. The date formatting doesn't care about a locale name, what it needs to know is how to format the date. So while it does look in what you could call a “locale table”, this table doesn't contain names (e.g. LC_TIME is fr_FR) but settings (e.g. “the short date format uses the order day-month-year, the long date format uses the month names janvier, février, …”).

The C function setlocale fills some entries in the process's locale settings table. It takes two arguments: a category to fill, and a string which is a name given to a particular value for these locale settings. The string is basically a file name to load the settings from. For example, setlocale(LC_TIME, "fr_FR") basically means “load date formatting settings into the process's locale table from the file /usr/share/i18n/locales/fr_FR” (it's more complicated than that, other files are involved, but that's the basic idea).

The locale settings table is a feature of the standard library (libc) which almost all programs are linked against (regardless of which language(s) they're written in). Most languages provide a way to set it by calling the standard library's setlocale function. For example, Perl and Python both have a setlocale function which resembles C's. High-level languages also typically have a way to set locale settings based on the environment, for example use locale in Perl; in bash it's automatic but the locale settings are not based on the environment but on the shell variables of the same name (so setting e.g. LC_COLLATE has an effect in bash even if you don't export it).

Not the answer you're looking for? Browse other questions tagged process environment-variables locale or ask your own question.

20
What should I set my locale to and what are the implications of doing so?

16
Correctly setting environment
7
Why does locale es_MX work but not es?
13
set LC_* but not LC_ALL
3
locale-dependent bash script: How to properly ensure locale?
7
Understanding environmental variables in different contexts
1
Why isn't `date` respecting my locale?
1
How does group permissions work?
2
How does the “locale” program work?
0
How to fix UTF-8 / locale problem in openSUSE Linux (in terminal / file names and program dialogues)